‘Remember Belgium’ was the slogan that encouraged thousands of Britons to fight in 1914. The phrase referred to Germany’s campaign of terror against civilians at the beginning of hostilities, an appeal to conscience plastered on sensational posters depicting the bloodthirsty Hun. Four years later and no exhortation was necessary: the tiny country had become a massive graveyard, and the phrase itself must have sounded more like an elegy than a battle cry. Set towards the end of World War I, amid the devastation of German-occupied Belgium, Mary Reid Kelley’s new video You Make Me Iliad (2010) explores such shifts in language and perception. Delivered in iambic pentameter, the dialogue in Reid Kelley’s film invokes that most ambitious of poetic forms, the epic. But these rhyming couplets have an ironic snap, imitating the mock-heroic satire of Alexander Pope. This is Homer recited by bug-eyed protagonists, their features outlined in thick black paint – Max Beckmann meets the muppets. With its startling juxtapositions of live-action performance and stop-motion animation, as well as its remarkable range of visual and literary references, Reid Kelley’s practice works from the structures of myth. You Make Me Iliad, a film and a series of drawings made during its production, comprised her first exhibition in the UK. A volatile mix of nihilism and comedy, the work presents a disarming response to the question of whether art can be meaningful in an age degraded by tragedy.

Our guide to this ‘chartless territory’ is a young German soldier (portrayed, like all of Reid Kelley’s characters, by the artist herself). Hoping to swap bloodshed for poetry, his lofty rhetoric echoes strangely in this cartoon wasteland utterly drained of colour, its bone-strewn battlefields lifted from the nightmares of Otto Dix. Notebook in hand the soldier sets off in search of material to complete his classic in the making. The only thing it lacks, he observes, is sex. The darkly comic encounter that follows, between the soldier and a Belgian prostitute, encapsulates the gripping struggle for meaning that lies at the heart of Reid Kelley’s work. While the soldier seeks to immortalize her as the authentic tragic female, the ‘whore of metaphor’ explains that such interpretation is merely a different kind of rape. Their exchange is so laden and convoluted it seems to test the ability of words to properly convey notions of suffering and self. In exasperation, the prostitute gives herself an internal cleanse, attempting to flush out the soldier’s romantic idealism from her violated person. As the droplets of saline solution run down her legs they turn into letters, forming the words ‘YOU DOUCHE’. With disconcerting wit, Reid Kelley’s technique celebrates the materiality of expression – in Roland Barthes’ phrase, bringing language itself to a kind of crisis.

With its literary allusions, stylistic references to absurdist theatre, word play and visual punning, Reid Kelley’s work is a dazzling appropriation of our cultural past. Yet we are supposed to do more than just admire and be entertained by this self-reflexive sibyl: these constant reminders of Europe’s civilized heritage have an ultimately alienating effect, in the Brechtian sense of the term. That is to say that the more we appreciate the artfulness of You Make Me Iliad, the more uncomfortably aware we become of our own dislocation from the violent reality being translated on screen. In the final scene, the soldier is apprehended by a ‘reeking editor’ (poison gas). As he suffocates, still struggling towards posterity (‘Sing, Muse! Your scribe has quill in hand!’), his valiant clichés evaporate into the air. The point Reid Kelley invites us to consider is that our cherished aesthetic structures and expressions are themselves sustained and even inspired by the workings of brutal military power. As the film ends the patriarchs of European thought are seen to prevail. Their hand-drawn portraits were even resurrected on the gallery walls, their influence seemingly undiminished while the war goes on. 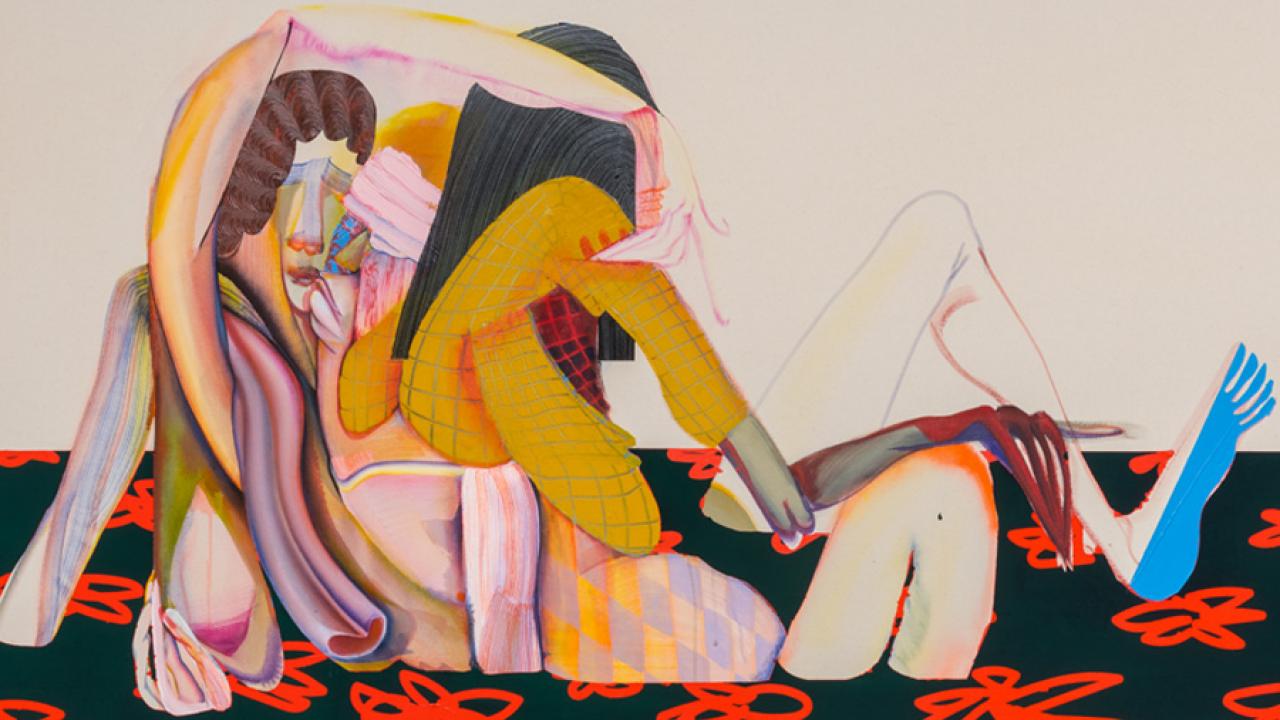 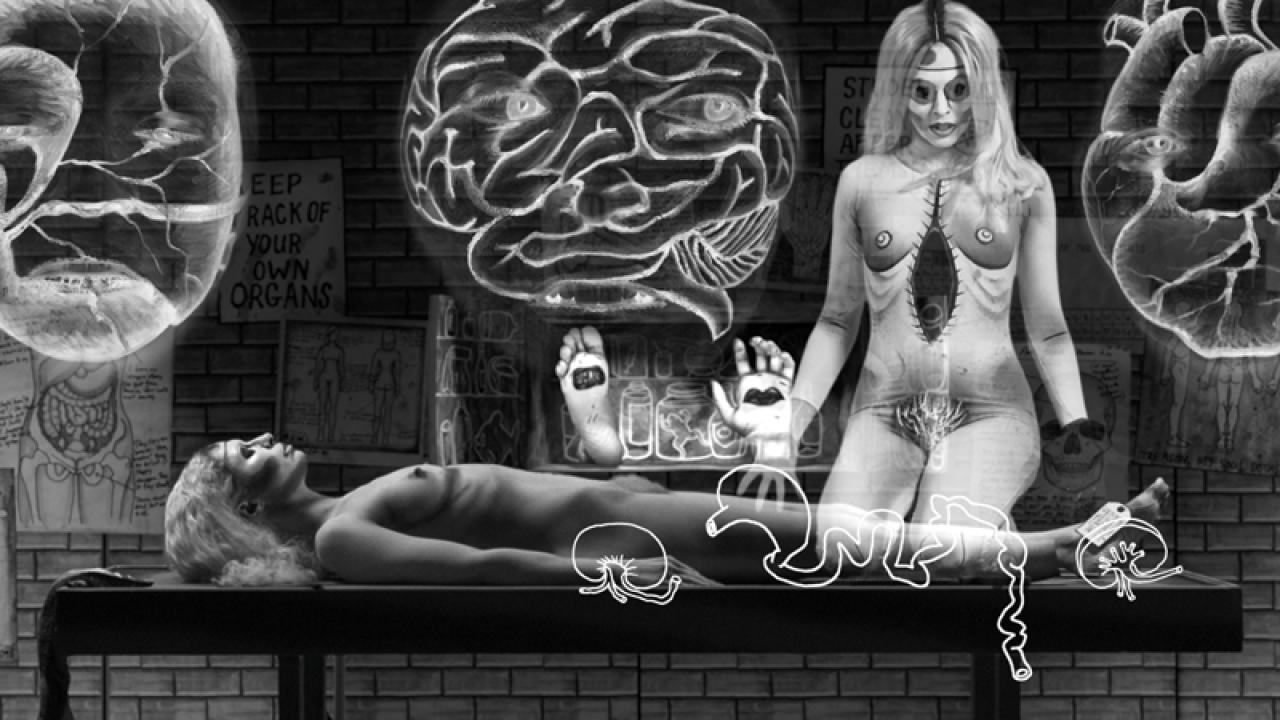 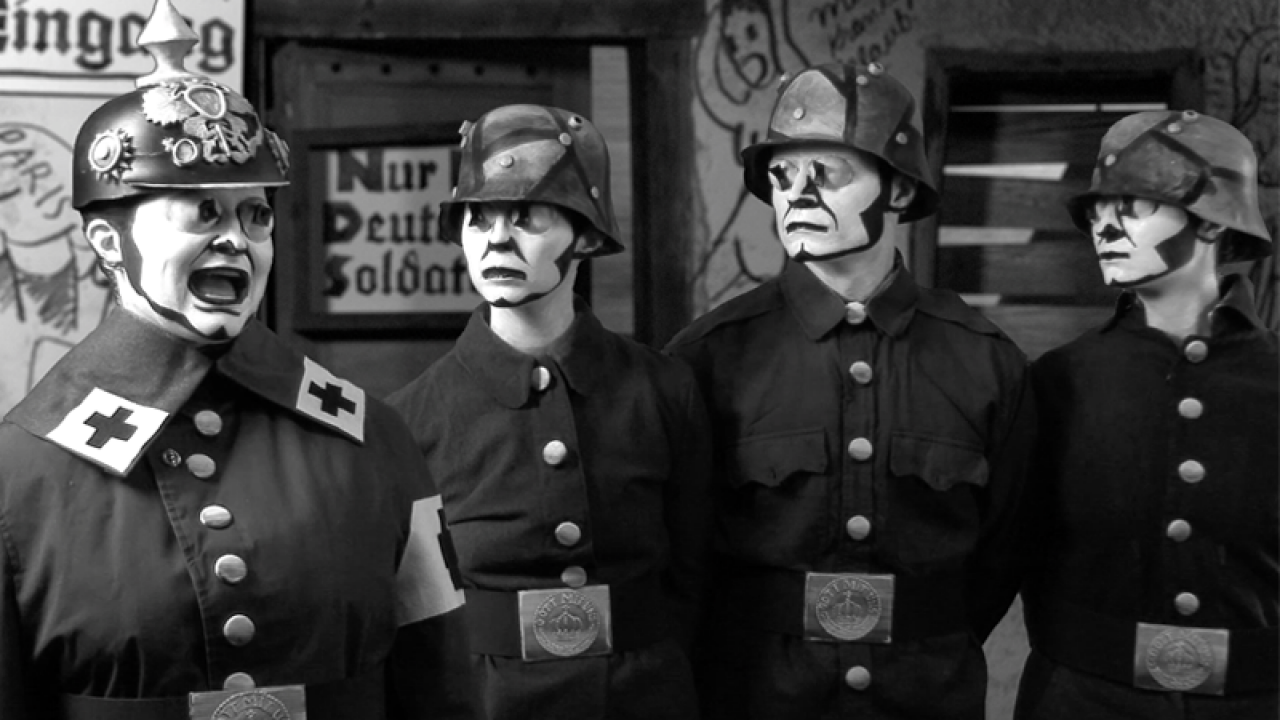