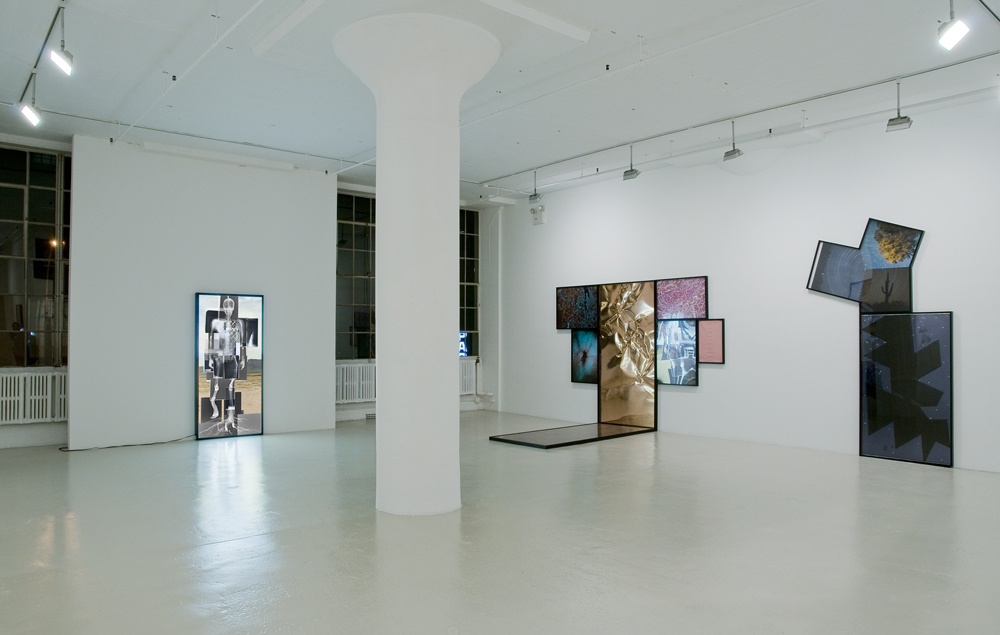 On New Year’s Day 1967, Evel Knievel catapulted his motorcycle over the fountains of Caesar’s Palace in Las Vegas. Fifteen thousand awestruck people watched live as he missed the landing and his body took a torturous trip over asphalt. That same year R. Buckminster Fuller’s enormous Geodesic Biosphere made a sensation at the Montreal Expo, while the number of US troops fighting in Vietnam rocketed to 451,752 – more than twice the number stationed in Iraq today.

Matthew Day Jackson’s concurrent gallery shows traversed the histories of such political and populist American spectacles with formal rigour. Like a good game of hard tennis, the two bodies of work volleyed concepts back and forth between art history and American news headlines: Bruce Nauman’s Body Pressure (1974), the 1968 My Lai massacre, Richard Prince’s Spiritual America (1983), NASA space missions, Roger White watercolours, the 1978 Jonestown mass suicides. Drawing transposed into sculpture – but not without crossing a void, both mythic (‘Tlön’ and ‘Terranaut’) and literal (the space between Klagsbrun and Blum is four Chelsea blocks).

In the anthropologically titled Missing Link (all works 2008) Jackson used Knievel’s body, shattered beyond recognition, and his own (presented as an X-ray composite) to represent the topographical fractures of figurative sculpture through drawing. The connection made between Missing Link and the two-part drawing and sculpture Dymaxion Skeleton pointed to the double articulation implicit in Fuller’s structures in which two- and three-dimensional spaces are expressed. Jackson’s work demonstrated this tension: the ability to compress and unfold in the same stroke.

This was especially apparent in the Body Pressure works, inspired by Nauman’s action, in which the performer uses his own body as sculptural material. In Body Pressure II Jackson, by casting his own body in fibreglass (filled with concrete and shaped by steel cables), re-imagines Nauman’s performance as the sculptural artefact of a studio practice (he dropped the fibreglass mannequin from the ceiling of his studio onto a sheet of aluminium and then, marked by the impact of a human form, inlayed the metal impression on the gallery wall at Blum). At Klagsbrun the body imprint was imbedded in copper and placed within a constellation of variably framed pieces (satellite images, Nauman’s original text and a patterned-wood floor piece). In both cases viewers were confronted with objects that were in fact residues of an arduous, body-based but non-public action in the artist’s studio.

The convergence of popular culture, art, commerce, crime, technology and military defence pulses throughout Jackson’s two exhibitions. Sometimes it’s overstated, as in Terminal Velocity (in which a mannequin composed of prosthetics lay prone on a damaged car bonnet) or the drawing Bullet Hole Constellation (in which a series of gun-related crimes was presented as a grid beneath bullet-pocked glass). Jackson is on target when focusing his attention on the echoes of failed Utopian visions and 1960s’ idealism (he mixes Bob Dylan posters, psychedelia, nuclear cloud images, advertisements for the film The Evil Dead advertisements and astronaut photographs). But sometimes the effect is simply one of overkill: too much missive coupled with too much craft. Still, by bringing us back to the frontier of American invention and sensation, Jackson demonstrates the tenaciousness of contemporary sculpture’s unruly materials.