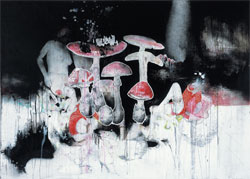 Matthew Greene’s paintings have often been discussed in terms of their Gothic sensibility. Entitled ‘She Who Casts the Darkest Shadow on Our Dreams’, his new show provided our first real look at the artist’s mature work, and made apparent just how little the Gothic label tells us about his practice.
The exhibition comprised several large-scale paintings and ink drawings, each of which is jammed with detail. Droplets, stains, tracings, bits of collage and tiny pornographic characters crowd their surfaces, creating a bruise-black clot in the centre of each painting. They are constructed like Abstract Expressionist canvases: painterly events are spread more or less evenly across the surface or concentrated toward the mid-section of the rectangle. Each work is evidently the product of a long process of accumulation, deploying several layers of effort. Luminous washes of purple leak from beneath clouds of grey. Rivulets of green and ochre are submerged beneath dense, overbearing black acrylic and trickling white. The paintings are glaring and hallucinatory; they resemble headlights shining though a rain-smeared window. Drawn, assembled and painted figures struggle subsequently to pull these wild zones of colour back to figuration. Shrouded figures clutch at swords; murky mushrooms emerge from copulating bodies; a delicate burst of colour transforms into porn-posed ass presented to the viewer.
These figures, imported from psychedelic art, fantasy illustration, Internet porn and Heavy Metal album covers, are disassembled into expressive fragments – an elbow, a torso, an eye, or the neck of a guitar – and then reconstituted. The end result is a kind of disarticulated landscape, an orgiastic forest scene. But Greene also captures the collaged feel of fantasy genre painting, in which a hodge-podge of heroic gestures and demonic accoutrements need only signify genre itself and establish a limited field of difference – between good and evil, and between male and female. Unlike an artist such as Frank Frazetta, whose paintings define the fantasy genre, Greene doesn’t fetishize the pumped-up plenitude of bulging muscles and popping boobs. Instead he renders these clichéd figures in graphic shorthand or builds them from negative space, methods that imply prurience rather than embody it. As Tangible as Reverie (2004), for example, fragments and superimposes its bodies, or renders them as empty outlines.
There are echoes here of, of all things, British Pop: compare the shattered appropriations of We Beheld the Holograph of Our Second Selves (Why Did You Eat Us?) (2004) with Richard Hamilton’s paintings of disassembled consumer desire from the late 1950s: see Hers is a Lush Situation (1958), for instance, or $he (1958–61). Both artists borrow bits and gestures from advertising and rebuild them into a fetishistic field – what Hal Foster has called a ‘tabular image’ – in order to think through pornographic compulsion rather than act it out. Greene obsesses over the female body but swerves away from its physicality, making his paintings seem oddly sexless despite all the ‘t & a’. For all his evocations of amour fou, he’s a Classicist: a dreamy Pierre Puvis de Chavannes rather than a desire-ravaged Eugène Delacroix.
Sometimes the interplay between several different scales in a single image produces an unintentionally comic effect. The Darkness that Hides the Tears that Soak the Pillow Where She Lay (2003), for example, ends up a murky mess, with a King Diamond character leering from the canvas and spritzes of purple and orange trying desperately to rein the indistinct picture back into sense. It doesn’t quite work; as Camille Pissarro knew, you can only toil away at a painting for so long before it turns to mud. When Greene’s methods click, though, the evanescent figures of women and plants take on the blurred, polymorphous tone of dream imagery. Even then, they remain amusing: the swarm of miniature, skull-headed women rocking out around a mountain of amplifiers in 666 (2004) is funny not only because of the range of detail apparent in its miniatures – from naked strutting to a full-on Stevie Nicks twirl – but because it works so well as a whole thing, as a picture.
These are works made with the eye of a Modernist painter, not a Gothic naïf. They live or die, succeed or fail, according to form. Paranoid details and stoned inversions crowd the images but are synthesized into a larger ‘picture’; they are submerged beneath a wash of glowing, expressive stains worthy of Hans Hofmann or Helen Frankenthaler. Greene’s Modernism dovetails with his romantic memory of Heavy Metal, and he mines an unspoken vein of sympathy between them. His tableaux, like both Modernist painting and Metal, are epic, coded, dramatic, flattened and extreme: not really Gothic at all.