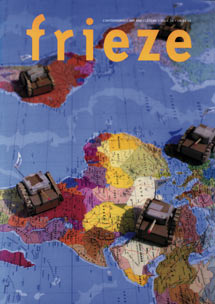 Maurizio Cattelan has been described as an art-world joker; an artist/funnyman who, following avant-garde tradition, repeatedly transgresses the accepted boundaries that define the art system and society in general. The humour in his theatrical and wilfully anarchic gestures, such as stealing the contents of an Amsterdam art gallery and presenting the loot as his contribution to a local group show, or his hanging from the ceiling a stuffed horse called 'Trotsky's Ballard', is an unsettling humour, that, within the context of recent art history, owes less to the cerebral wit and verbal punning of Marcel Duchamp than to Mike Kelley's gutsy embrace of the abject. In fact, the comic and the abject are not dissimilar. Related by the feelings they evoke, like pity or disgust, they are often masked by the joke: a technique that Freud saw as a form of 'fore-pleasure', allowing a socially acceptable release of internal inhibitions. As such, Cattelan's jokiness might be seen as a nervous façade, diverting attention from the realisation that art is unable to make a difference in the world.

This more solemn reading of Cattelan's art is supported by his latest installation at Le Consortium, where, using his own brand of 'situational aesthetics', he has left the five-room exhibition space almost entirely empty. In one of the rooms Cattelan has dug a deep, rectangular hole in the floor, piling up the dirt and debris at its side in a pyramid configuration. Somewhere between an archeological dig and a grave, the freshly opened void reveals different layers of earth, stone and cut plastic pipes. The harsh light that floods the room gives a clinical feel to the emptiness and conjures up visions of a surgery or morgue.

Formally, Cattelan's near-empty space resembles an installation by Michael Asher shown at the Kunsthalle Bern several years ago, where the artist emptied the Kunsthalle's rooms, moving the sole remaining structural elements ­ the still-functioning radiators ­ into the front entrance. With this seemingly simple gesture, Asher undermined, much as Cattelan does in Dijon, the viewer's expectations of seeing art objects in an art institution, and hence turning a typically visual experience into one more sensory and intellectual. But unlike Asher, whose well-known interest in institutional critique gave his action a more analytical bent, Cattelan's hole is essentially an existential equation of emptiness with death.

The only other sign of the artist's intervention in the space is a cheap grey-green tin cupboard that stands awkwardly in the stark white, minimally-designed reception area. Surprisingly, the cupboard's doors periodically open from the inside as busy art professionals pass through it from the back offices and storage area which it blocks. This placement suggests, at first glance, that the closet's purpose is only to hide the messier, behind-the-scenes activity that allows the institution to function. On further reflection, and in the light of Cattelan's past pranks, it appears to work as a foil to the more ominous tomb nearby, poking fun at the gallery workers by forcing them ­ literally ­ to come out of the closet at least once per day.

If many of Cattelan's actions are initially reminiscent of much art from the 70s, his appropriation of this period, both in form and spirit, seems intended as much to ape the anti-institutional pose of its artists as to make light of their utopian ideals. Fuelled, paradoxically, by a wary scepticism and an almost manic sense of purpose, Cattelan pushes the limits of the acceptable as a form of autocritique, but also as a way to shake up the weary complacency that hangs over much art of the 90s.