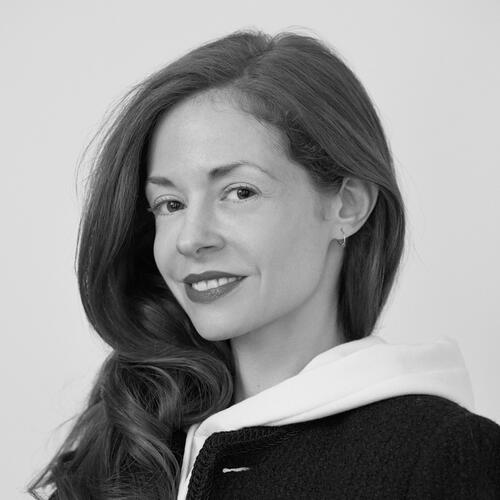 Moroccan-born, New York-based artist Meriem Bennani makes short films that are decidedly political, yet also somehow very funny. The narratives illuminate the messiness of borders and underscore the importance of community and care. Life on the CAPS (2022) is the final instalment of a trilogy about a fictional, mid-Atlantic, island internment camp where there are two kinds of inhabitants – three, if you count the crocodiles, known as ‘crocos’. The other two are the power-hungry Troopers and their captive residents, the Zippers, who have been caught mid-air trying to teleport illegally.

This third film opens with a tropical plant-coloured portal, filled with what looks like the face of a woman pushed into a too-small space. This image is the same colour as the lime moon sign that flashes in the dark CAPS sky. (Bennani has an admirable way with colour, especially green.) There is a Trooper Mart that sells frozen Oreos, cigarettes and M&M’s, like any convenience store on an American military base. Internet flows through cables under the sea and, so the story goes, kids sometimes dive down to cut them and blame it on the crocos. A marshalled flow of information is all over CAPS. It’s hard to talk about borders in relation to signal and sound, but this is a world where you can’t even teleport free-range.

The Troopers troll the citizens by blasting aloud new CAPS music tracks, created and uploaded less than an hour prior; everything is for the taking. It works in reverse, as well. Communicable disease is controlled when it affects the ruling population. So-called Plastic Face Syndrome had spread rampantly for generations, until it reached a Trooper. And then, it was eradicated. A cure found fast.

‘None addressed to us,’ says the haunting female voiceover in the video, speaking to how the people of CAPS see the submerged data-flow of emails and streaming TV shows. But then, when it gets dark, underneath the lit green crescent, they gather to make song. Senegalese-born Kuwaiti musician and producer Fatima Al Qadiri collaborated with Bennani on this film’s entire hypnotic score.

Murky borders cede to sonic calm, which lasts long past the end of the film. There is a gathering where everyone has started to sing and clap in call and response. The Troopers steal uploaded music, but they can’t intercept a clap-back from its moment of return. This kind of exchange also evades surveillance: undetectable, unstoppable once it hits air. You can refuse entry to bodies even as atomized stuff, but you can’t pin down pure joy.

This article first appeared in frieze issue 228 with the headline ‘Brave New Worlds’.

‘Meriem Bennani: Life on the CAPS’ is on view at Nottingham Contemporary until 4 September.

Stephanie LaCava is a writer. Her novel I Fear My Pain Interests You will be published by Verso in September 2022.