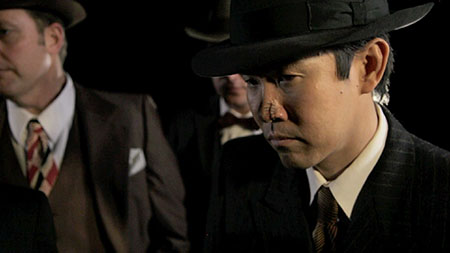 Since its 1974 premiere, Roman Polanski’s neo-noir masterpiece Chinatown has been interpreted, for better or for worse, as a meta-film of sorts – both an allegory of the cinematic valorization and corruption of Hollywood and an abreaction to the insidious trauma visited upon its director with the zeitgeist-defining murder of his wife, Sharon Tate. Mythologized as the artistic climax of Robert Evans-era Paramount, the film’s success was also indebted to the self-congratulatory role given to the setting of Los Angeles itself, re-envisioned during the louche post-1960s era as a gilded soundstage. Like the film’s titular neighbourhood, which doesn’t actually appear until the closing minutes, Polanski’s LA was more of an idea than a physical location, a sweeping 20th-century eschatology that yoked the covenant of Manifest Destiny to the messianism of Charles Manson.

In true LA fashion, Singaporean artist Ming Wong has refurbished Polanski’s original cinematic simulacrum of the city by digitally rendering it as a second-stage simulacrum of a Baudrillardian noir, where identity, place and ethnicity become fluid categories. Wong, known principally for his filmic restagings of European art classics like Ali: Fear Eats the Soul (1974) and The Bitter Tears of Petra von Kant (1972), wherein he films key scenes with himself as the primary characters, creates a similarly parallax Chinatown, filled with duplicates of Jack Nicholson, Faye Dunaway and John Huston, all performed according to the original script (with a few exceptions) by Ming Wong.

Though his stylish re-dramatizations, complete with period wardrobe – from zoot suits and fedoras to coiffed wig and pearls – and digitally transferred backdrops, initially resemble the kind of film parodies now prevalent on award and sketch comedy shows, the effect of the artist’s serial duplication on each screen ranges from campish to heartfelt to grotesque. Summarized in six key scenes, which play on video loops distributed chronologically throughout a darkened labyrinth of theatrically crafted backdrops, the artist’s pastiche emphasizes the Mélièsian whimsy of ‘movie-going’ while subtly thumbing its nose at Polanski’s flagrant, and occasionally offensive, melodrama. The first sequence, in which Nicholson’s Jake Gittes regales his office cronies with a dirty ‘Chinamen’ quip, becomes, in Wong’s video, a visual détournement of LA’s Asian stereotypes. ‘Then the guy says, “Well the Chinese, first they screw a little bit then they stop and they go and, uh, read a little Confucius, come back, screw a little bit more and then they stop again, go back and they screw a little bit more…”’, Wong jokes, while another iteration of the artist, this time transformed into Dunaway’s Evelyn Mulwray stands quietly behind. Wong’s gender-bending portrayal of Mulwray and superannuated take on Huston’s Noah Cross – one of the great villains of cinema – are particularly affecting, showcasing the artist’s versatility at mimicry and acting. The tri-part performance also transforms the incestuous love triangle, which stands as Chinatown’s narrative cliffhanger, into an exercise in reflexive semiosis – Wong appears ‘dolled up’ as Katherine, the innocent love-child of Cross and Mulwray.

Part of the reward of Making Chinatown is also in its immersive pleasure, an atmosphere intricately plotted along a horseshoe pattern that forces the viewer to move from video to video through a simulated studio back lot, so that each sequence is experienced as a dimensional extension of the screen – a hyperreal rupture of conventional cinematic visuality. This mutability of design also allows for aleatory recombinations of various audio and video snippets, depending on the viewer’s position and pace. Classic lines of dialogue – ‘You are a very nosey fellow, kitty cat’, ‘Politicians, ugly buildings and whores all get respectable if they last long enough’ and ‘Forget it, Jake. It’s Chinatown’ – impinge upon one another, recontextualizing the narrative’s hardboiled storyline into the kind of synchronic cut-up once celebrated by Brion Gysin and William S. Burroughs. Coupled with the countless facsimiles of the artist on screen, the sensorium is a perfect miniature of the classic Hollywood dream factory digitized. Moreover, Making Chinatown is a playful and diligent encomium to the city whose sense of place is commonly determined by the dis-placed fantasies of the image.