Barry Jenkins's new film about growing up black and gay is raw, sincere and game-changing

Barry Jenkins’s new film Moonlight is nothing short of revolutionary. Set in a poor black neighbourhood in 1980s Miami, it follows the young life of Chiron, a boy tormented by his classmates and his crack-addicted mother for his perceived effeminacy. When a kind drug dealer (Juan, played by Mahershala Ali) and his girlfriend (Teresa, played by the singer Janelle Monáe) take him under their wing, Chiron first experiences real, unconditional love. When Juan takes Chiron to the beach and teaches him to swim, cradling him in his arms while the aquamarine waves rise around them, we witness a moment of tenderness that might be shared between a father and son. Chiron’s adopted family is itself a model of queer relationships, and a testament to Juan and Teresa’s upbringing, with its insistence that a community take care of its own. Each character is written and performed with an emotional complexity that is rare and intoxicating.

From its very first moments, Moonlight shatters a dozen racist clichés without fanfare: of the drug-dealing thug, of homophobia in the black community. It addresses the trauma of rejection not with a sappy score or melodramatic camerawork, but raw cuts and moments of grating silence. When Chiron is first called a faggot, we cannot hear the word: we only see his mother, high on crack, mouth it to him in a vicious rage. She backs up, dead-eyed, into the pink glow of her bedroom. The scene replays later, when Chiron is a teenager; the word haunts him wherever he goes. Like tissue around an emotional scar, pubescent Chiron shields himself with silence, either too scared or too mistrustful to open himself up to others. His fearfulness is painful to watch – the mark of someone who has never been loved as himself, but only a projection of what others want him to be. 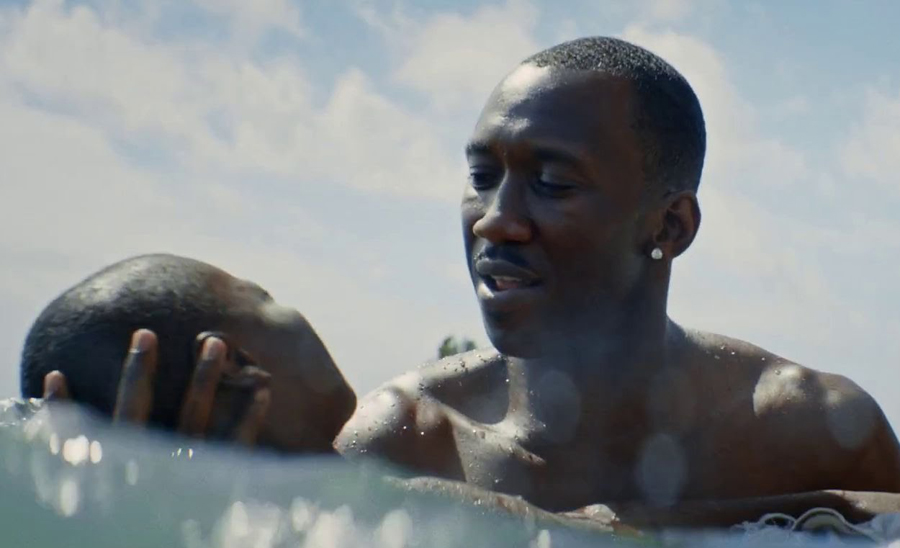 There is only one scene of intimacy between Chiron and another boy in the film. It is not explicit; we see two shirts ruffled in the moonlight on a beach, and fingers digging into sand. It is not the sexual act that is important but Chiron’s anxiety; he knows this ecstasy cannot last. When they finish, he’s so uncomfortable with his own body – and so terrified that his desire will be met with the usual violence – that he apologizes. It’s a tender yet tragic moment that will be all too familiar to queer viewers. And later, his fear is justified: the boy returns Chiron’s affection with his fists.

The film has a number of turning points. No spoilers here; but it testifies to the way we condition young boys of all races today, in a hyper-masculine culture that exalts violence and represses genuine emotion. Certain parts of the film suggest (though they do not figure) the painful omnipresence of America’s bloated carceral system: a prison-industrial complex that snatches up young men of promise and hardens them for life.

There are no white people in the film. This is intentional. Moonlight is not a film about whiteness; nor is it a film about blackness per se. It is a film about masculinity, about loneliness, and most of all about love – love that does not play by the usual rules, but that nurtures and sustains us against the bitterest odds.

Evan Moffitt is senior editor of frieze, based in New York, USA.