Moscow recently held its first international Biennale, the biggest exhibition of contemporary art ever to be held in Russia 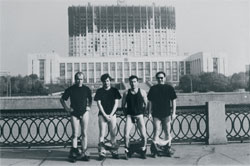 Pavel Pepperstein: In most action films, the hero, in order to achieve his task, must gather a group together in which members never communicate with each other ‘beyond the business’. Once the group splits up everyone return to their worlds, unless there are problems with sharing the money, or dealing with the consequences of love or revenge. For artist micro-groups in Moscow ‘doing business’ is even more complicated – members tend to hinder rather than help each other in creating works of art or in furthering their careers. Nevertheless, they accept these inconveniences for the sake of continuing their groups’ existence. This is not, as suggested in the West, a sign of weakness, but one of pleasure, which derives from the Russian sense of blissful separation from the rest of the world – even if such pleasure may seem at odds with much contemporary art’s preoccupation with communication and collaboration.
Society in general, and the art-world in particular – or macro-groups – are making every attempt to make Moscow’s micro-groups extinct; if they are prepared to document their history, it tends to be of the retrospective ‘I will love you when you die’ variety. I prefer to examine the here and now. The new type of micro-group is almost invisible, even to its members. They have neither unity nor solidarity and it’s almost impossible to trace their footsteps during the coldest days of winter (although the winter is getting warmer), or in the drunken days of spring (although spring is sobering up).

Collective Actions (CA)
Since the 1970s the group Collective Actions has been closely connected with a field in the Moscow region, originally a farm, called the Kievogorskoe Pole where they enacted their performances (‘collective actions’ is a play on ‘collective farm’). The vast space and simple quality of the field were both the conditions and the content of these events. During the 1990s the field was divided up which put a stop to the CA’s activities for several years. Consequently, they became a virtual micro-group, mourning the loss of their site, moving from a ‘cultivation of emptiness’ towards a nomadic lifestyle. Their subsequent actions took place at the group’s second site – the Moscow Circular Highway, creating a micro-social circle of Moscow Conceptualists, the so-called ‘MANI circle’. This provided a rich environment for other micro-groups such as Fly Agarica, C3, World Champions, and Inspection Medical Hermeneutic.

Inspection Medical Hermeneutic (MH)
The MH was concerned with studying theoretical constructions, ideologies, artistic principles and the shifting borders between micro-social and macro-social spaces. Because the group, unlike CA, was the child of an exciting period of political and economical instability, it gave birth not only to one established circle but also to many new and unstable ones. These MH circles formed a sphere, which is now called The Circle of Psychedelic Realism or The Estonia Circle. On 11 September 2001 the MH moved into a category of virtual micro-groups (of whose existence we can’t be certain). It was a moment of destruction of the ‘mystical’ void between the ‘First’ and ‘Third’ Worlds, which for a long time was called the ‘Second World’. The MH became a micro-group that had lost its space. As Slavoj Zizek pointed out: ‘The closing of the research department is the first thing done by a large First World Company after it consumes smaller Third World Companies’. Now that Russia, at the beginning of the 21st Century, had finally became an affiliate of the international capitalist substructure, the Inspection MH, as one of the ‘research departments’ of the second world, was ‘shut’.

FENSO
The FENSO group created a sense of fun and friendships: from LSD-wanderings in the woods to role-playing – knights, gangsters, hockey players, Zen-masters and English college-boys. Although the theme of friendship was practiced by many art groups, (including Fly Agarica, C3, The Forth Height), it was the FENSO group that brought it all together. A failure of these friendships looked like jealous revenge of the macro groups on the ecstasy and celebration of the micro-groups. Anton Smirnsky (former member of FENSO group) transformed his apartment into an installation-museum dedicated to the novelist Jane Austen and to her ‘novels of relationships’.

RUSSIA
The group Russia was named after the house on Sretensky Bulvar, where it still has some lofts. During the second half of the 1990s, the Russia house was situated next to Ilya Kabakov’s former studio, and became a centre of fellowship and collaboration for a large circle of artists from Moscow, St Petersburg and Odessa. As a result of receiving almost no institutional support its members gradually moved out to the countryside. The group has now lost its subject matter and is ‘virtual’; gloomy symbolism considering that subject matter is ‘Russia’. The paintings of the group are among the most interesting things to come out of Moscow’s contemporary art scene. These modest paintings, which consciously attempt to dissolve into a multitude of other paintings, could be described as spiritual viruses that contribute significant disruptions into the smooth functioning of commercial Russian culture.
Other artistic groups such as the left wing, politically involved Radek and PG (its members translate its name as either Complete Shit, or Political Group) have also lost their objectives and moved into the virtual category. Their political dimension almost completely disappeared once it became clear that political openness in Russia was a facade. The PG group’s attempt to merge the psychedelic approach of MH with the political involvement that stems from the Moscow Actionists of the 1990s is interesting, but we are still not sure how successful they were.
Finally, Cloud Commission and Tartu are the most perspicacious micro-groups. From the very beginning they were virtual, representing their object (poetry), as completely lost and irrevocable.
In the last six years Moscow has been overtaken by overcrowding and an absence of free space and, symbolically, of any free-thinking. Moscow is being destroyed and no one is protesting. The same thing has happened to political freedom (which was real during the 1990s): all we can hear is apoplectic breathing, the ‘strange wheeze of fat men’ (while the rest of the population starves and is silent). The micro-groups had their own euphoric languages and were able to ignore the rest of the world, which provoked envy in macro-groups. A society that encourages this kind of envy creates a dangerous and painful position, suffocating itself through an absence of alternatives and restrictions of space and time.
Translated by Anya Stonelake

Pavel Pepperstein is an artist and writer based in Moscow and a co-founder of the Inspection Medical Hermeneutic group. With Sergei Anufriev he co-wrote a novel The Mythogenic Love of Castes (Moscow 1999). A longer Russian version of this essay appears in the catalogue of the exhibition Accomplices. Collective and Interactive Works in Russian Art of the 1960s – 2000s at Moscow’s State Tretyakov Gallery. He recently had a solo show at Sutton Lane Gallery in London.