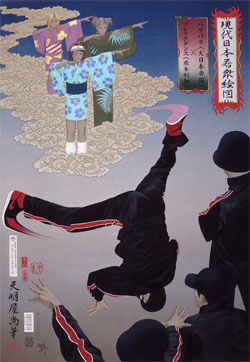 William Gibson once said that Japan is ‘the global imagination’s default setting for the future’. At a time when Japanese anime and manga are finally cracking the American market (home-grown versions lack that ‘Japanese-ness’, apparently), it seems appropriate to review issues of Japanese tradition and identity. ‘From Nihonga to Nihonga’, the subtitle of MOT Annual 2006 (an annual event for up-and-coming artists curated each year by the Museum of Contemporary Art), put this fair and square. All seven artists were engaged in critique of nihonga, traditional ‘Japanese-style’ painting: essentially mineral pigment and animal glue on paper with an emphasis on fluid media, linearity, lyricism and symbolism. The term was coined in the mid-19th century in order to find a ‘border’ that would distinguish it from Western-style painting. No demarcation was required before then; and, as this dichotomy is increasingly eroded, its foundations of opposition and difference are increasingly hard to maintain. The question raised by the exhibition was whether such a thing as contemporary nihonga could exist.

Hisashi Tenmyouya was not going to take things lying down. Works such as Contemporary Japanese Youth Culture Scroll – Para-para Dancing (Great Empire of Japan) vs. Break-dancing (America) (2001) or the graffiti-spraying ninja of Contemporary Japanese Youth Culture Scroll – Nine Kamakura Samurai (2001) spelled out clearly his buto-ha or ‘way-of-the-warrior’ school of art. Technically immaculate, the nationalistic overtones of his work were redolent of Takashi Murakami’s ‘Superflat’ manifesto, as well as traditional nihonga. Tenmyouya coined various neologisms in his catalogue statement, including neo-nihonga and (to describe himself) gakyo, ‘strong painter’, all of which smacked of corporate branding as much as genealogism. It was perhaps no surprise that Tenmyouya should be one of 14 artists to be selected to work on the 2006 FIFA World Cup official art poster. Tenmyouya epitomized the basic problem for these artists: how to enervate nihonga without falling into an alternative but equally rigid trope of tired bourgeois notions of the artist as irreverent, socially aberrant and/or sensationalist.

T.S. Eliot commented that to be absolutely contemporary, one must be absolutely steeped in history, and that great artists have traditionally rewritten rather than rhetoricized tradition, from the perspective of the present. This reanimation of the past was clearly found in the work of Matsui Fukuko, in a particularly Frankensteinian manner. The most traditional and refined artist included, in terms of technique and materials, she presented scrolls and drawings on silk informed by ghost paintings, a classic nihonga theme. However, significantly, she avoided painting ghosts per se. Instead her figures were of ambiguous vitality, such as the disembowelled daydreamer of Keeping up the Pureness (2004), a naked woman prosected (womb and foetus exposed) as if for an anatomy class, lying with glazed eyes fixed upon us among lilies and other floral motifs. Erotic and macabre, Fukuko’s figures seem sinisterly between life and death.

Fukuko was in fact the first artist encountered in the exhibition, and the opening line of her accompanying statement was arresting: ‘Japanese-style painting contains madness.’ Such a direct assertion (we would assume supported by the curator of the show when positioned so prominently) does perhaps help in reading these neo-nihonga, by pointing towards an internalized and accommodated insanity: very different from the Western extrovert Romantic or avant-garde artist.

Her aims include ‘a condition that maintains sanity while being close to madness’. This duality or ambiguity – like her living-dead – was also found in the work of Kumi Machida, who, along with Fukoko and Mise Natsunosuke, made up the three best artists. Similarly motivated by ‘doubts and a sense of distance between me and society and within myself’, Machida’s understated, disturbed imagination produced, deadpan works of twisted banality, redolent of a Haruki Murakami novel as well as of cult anime Neon Genesis Evangelion (1995).

The deliberate substitution of ‘contemporary’ for ‘traditional’ motifs, as much as negating the border around nihonga, is perhaps too simplistic and short-term a response. Instead, the subtle distinctions made in, for example, qualities of madness (for Fukuko, a result of folding nihonga upon itself, ‘a hysteric condition achieved through repetition and receptivity’) may clarify a neo-nihonga sensibility rather than a style. An internal, sublimated event – a madness of silence – rather than an external rage is both highly otaku (a term used to connote geeky obsessiveness) and, perversely, very Zen. The disturbing uncertainty of reality was enshrined in the traditional term ukiyo-e: literally ‘art of the floating world’, a deliberate pun on the Buddhist notion of the ‘sorrowful world’ of mortality. Perhaps these artists reverse this irony, reconfiguring the discord of the present reality identified by Zen Buddhism as much as critical theory, or else attempt to break through it, by accelerating the evolution of nihonga itself at the break-neck, Virilio-like speed of progress that still drives the erstwhile bubble-economy – such that the Japanese remain, as Gibson suggests, more in the future than in the present. 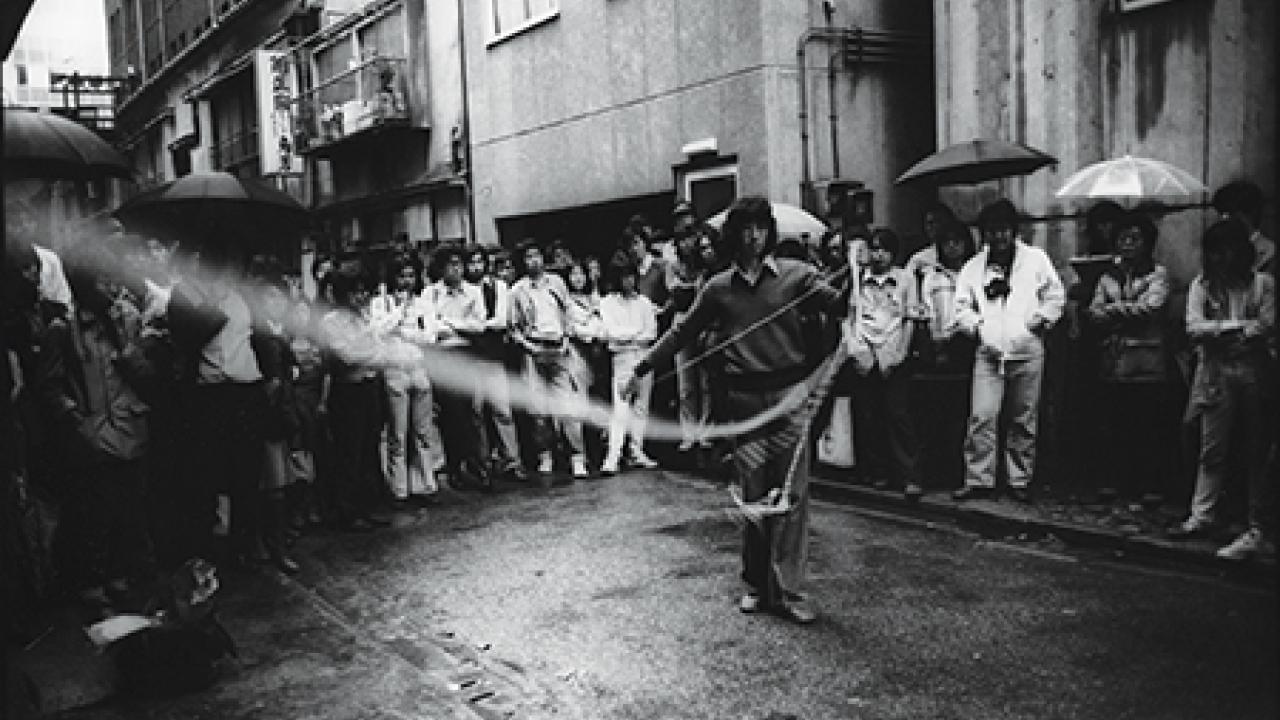 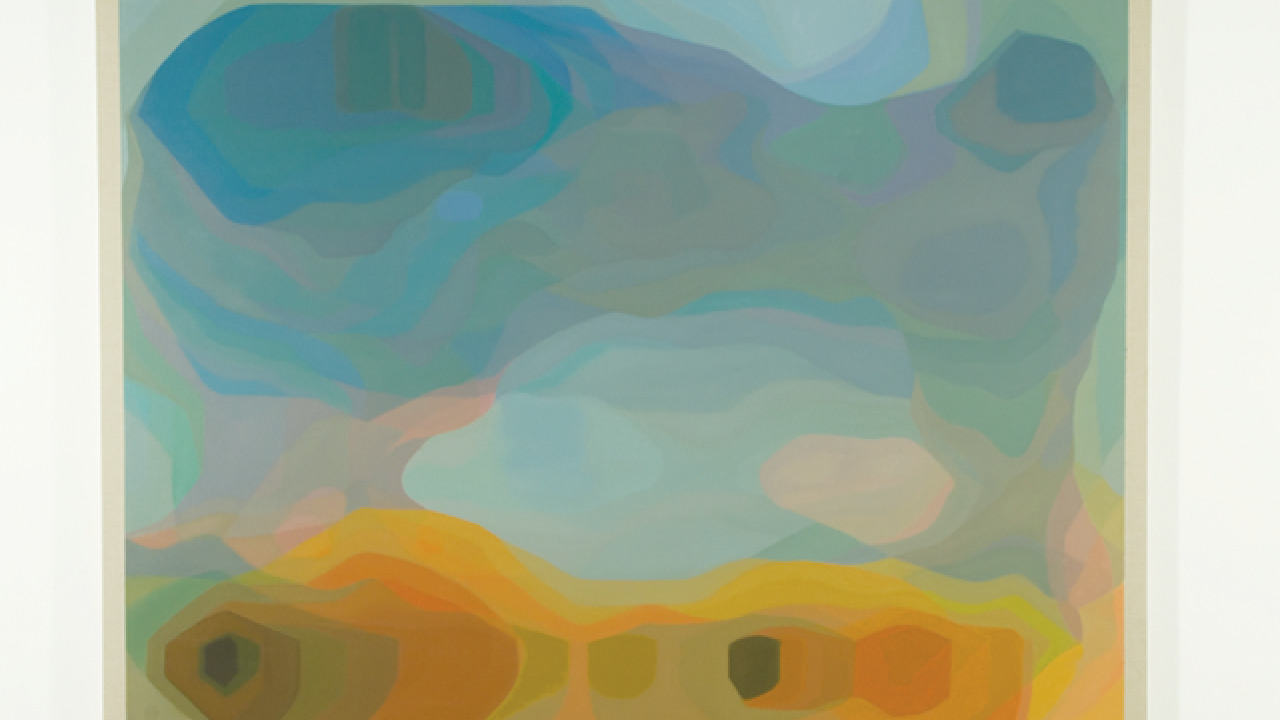