Moyra Davey’s films deploy simple strategies to tackle complex subjects. With a far larger body of work as a photographer of quiet, seemingly inconsequential images taken of her daily surroundings, they add a further layer of documentation to her practice: the New York-based artist as writer and reader. Davey’s 2006 film 50 Minutes, for example, focuses on the years she spent in psychoanalysis, while My Necropolis (2009) analyzes an oblique line from Walter Benjamin’s correspondence. Part diary, part work-in-progress, the piling of citation and prose into short, refracted chapters results in reverberating visual essays.

Switching between autobiography and historical inquiry, her third film, Les Goddesses (2011), is disquieting in its simplicity. Using little more than a video camera and voice recorder, Davey films herself walking around her apartment with one earphone in, as she listens to and simultaneously repeats pre-recorded passages. At just over 100 minutes long, it’s the most sustained of her films and perhaps the richest. The set-up is clear: Davey recounts the lives of the writer and political activist Mary Wollstonecraft, her daughters Fanny Imlay and Mary Wollstonecraft Godwin (later Mary Shelley), and their stepsister Claire Claremont (the piece is fastidiously researched: errata appear twice as subtitles to correct factual errors). These then segue into reminiscences about Davey’s own family. Images of the artist’s sisters punctuate the film, as Davey riffles through a series of black and white photographs she took of them and herself as young, defiant women in the late 1970s. 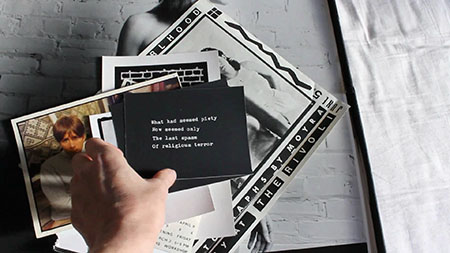 Wollstonecraft’s daughters were nicknamed ‘les goddesses’ by a family friend, and were linked in love and tragedy by Percy Bysshe Shelley. Davey tells us that Shelley initially had eyes for Fanny, before turning his attentions to Mary (and then, allegedly, to Claire). Fanny, devastated when her sisters eloped to mainland Europe with Shelley, followed her mother – who was similarly heartbroken, having been rejected by Fanny’s father Gilbert – in attempting suicide by drinking laudanum. Unlike her mother, however, Fanny succeeded and died at the age of 22. Neutralizing the frequently salacious accounts of these episodes, Davey’s delivery is dense and monotonous. Her analysis spills over into the personal, as affinities with her own life suggest themselves: she mentions her son, her father’s early death, her sister Jane’s similarity to Mary Shelley, among other things. Clearly Davey is more comfortable with research than with the confessional mode. ‘Why does everyone want to tell a story?’, she asks, ‘Why do all my students talk about “representing memory”?’. Later Davey mentions that a selection of texts she has accumulated lie buried in a folder labelled ‘Pathography’. Just as with the method used in her short essay 'The Problem of Reading' (2003), a beautifully weighted analysis of the economies surrounding the dilemma of choosing what next to read, Davey’s self-analysis comes by a process of self-deception. It emerges in the margins of her research.

At the end of Les Goddesses, Davey divulges that there was a period of roughly ten years when she stopped taking photographs of people at the very time when photography was under attack from theories ‘dismantling photography’s truth value’. She surmises that this was due to her reticence to tell her own story. A series of 25 photographs (‘Subway – writers III’, 2011) – folded, stamped and mailed to the gallery – were shown alongside the film. Comprising snapshots of commuters writing while travelling on the subway, they seem an uneasy return to photo­graphing people. Oblivious to the camera, rapt in concentration these strangers – filling in crosswords, paying bills, reading – could just as easily be Davey herself.