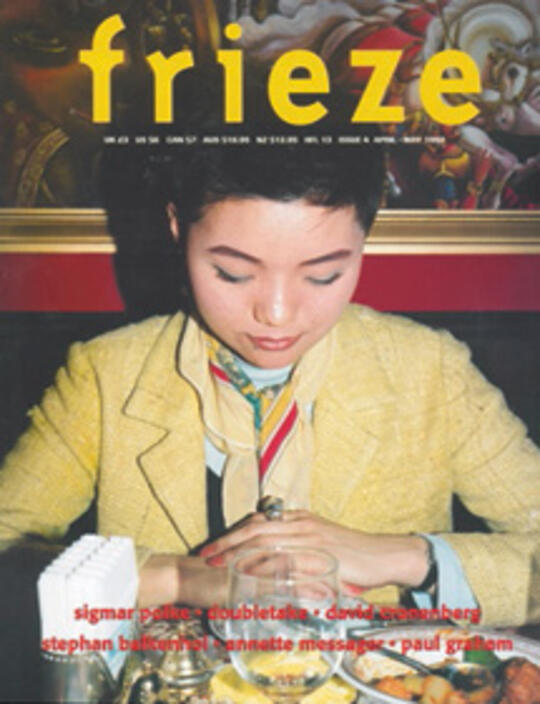 My Pink Half of the Drainpipe

One version would be that Signs of the Times was born of the marriage between a fly-on-the-wall documentary and Through the Keyhole, the celebrity peep-show. But this five part 'portrait of the nation's taste' (as it was sub-titled) was more than just fly-in-the-keyhole television. Whatever one's reactions - and they seemed to range from disgust to delight - it was clearly a very carefully planned and prepared series. Its 50-odd intrusions into a variety of people's homes were perched on that rather high fence that divides two well ploughed fields dedicated to the study of human relationships: sociology and comedy. Each individual programme tilted one way then the other, but overall the precarious balancing act was just about maintained, and this ambiguity certainly contributed to the series' overall flavour.

First, the sociological side. These days we associate 'documentary' with television; but in many ways Signs of the Times owed more to still photography. Martin Parr, the well known 'realist' photographer was commissioned to produce a series of stills which accompanied the TV programmes in the form of a book and 'advertisements' in bus shelters and the London Underground. Their form, wide shots of figures posed in their homes alongside their furniture and decorations, or close-ups of individual fittings or ornaments, followed that of the TV programmes which were also dominated by static shots, either wide or close-up, and some very slow tilts and pans. They were also presented in a letter-box format so that each shot was framed with tasteful black margins. This film style was generally successful, not least because it stood out a mile from the the kind of hyper-kinetic mania that usually infects the filming of art on television. The voice-over on film and the captions to the stills were provided out of the mouths of the various interviewees. Although they were clearly prompted from behind the camera, the series was marked by the absence of any overt authorial voice or narrator. Which is not to say, of course, that the viewer's attention wasn't directed in various ways.

These photography and interview techniques were intended, I think, self-consciously to link the programme to a genre which has its roots, in this country at least, in Picture Post and Mass Observation. Each had sought to study contemporary social trends through the meticulous observation of the minutiae of everyday behaviour. More recently this genre has settled into University and Polytechnic departments of Cultural Studies, whose characteristic methodology is derived more from structural linguistics. This may seem a far cry from Sunday evening television, but even the title of the series contains a knowing nod in the direction of its Barthesian roots.

Cultural Studies is also a far cry from comedy. At least, it doesn't generally set out to be funny. But in another way comedy has never been far from Cultural Studies: whatever else is the comic apart from a way of reflecting on our culture and of studying ourselves? And all the more valuable for being so fundamentally uncertain and contradictory. Baudelaire, in his unrivalled analysis of the comic, stressed its essentially divided character, its internal split between reflexivity and prejudice, between learning and knowing better, between reminding ourselves our own absurdity and reinforcing our sense of the absurdity of others. And it is no coincidence that it was the same writer who, as metropolitan flaneur, set down a basic pattern for the study of contemporary social behaviour and set in motion the process which gave rise to Mass Observation and Mythologies.

So what did Signs of the Times give us? This is not easy to sort out. Nancy Banks-Smith, The Guardian's majestic TV critic, found it engaging in an illuminating kind of way. Her only complaint concerned the rather leaden sound of the series title. The Sunday Mirror, on the other hand, listed the programme as the 'hilarious series in which people with appalling taste are given enough rope to hang themselves'.

But there isn't really any discrepancy here. For Baudelaire had also noted that the same event could always give rise to different types of laughter. What made the series at all compelling was just this ambiguity, and the kind of unease it planted in the viewer. Who in truth could be sure they were smiling at their newly acquired insight into the subtleties of character and relationships, and not at some self-satisfied pillock whose gloatings appeared to seep up from the S-bend of their new avocado toilet?

Often during the course of the series it was difficult to say whether we were observing something about people's tastes or something about their relationships. But perhaps these are not really different things so much as different aspects of the same thing: a person's character. Certainly what I choose to surround myself with and how I interact with others indicates something about (but doesn't define or explain) my character. But a great deal of the time, for better or worse, I am not able to choose what or whom I have around me. And it was in relation to this that the series became less than the study of 'ordinary people' that the press release claimed it to be.

The subjects for the series seem to have been chosen on a fairly ad hoc basis - no claims were made for the selection being representative in any sociologically meaningful way. At the same time the sample was fairly varied. The producers had obviously taken care to maintain some balance between gender, class and race among their interviewees. But what made the sample generally atypical (at least in relation to almost anyone I know) was the sheer time and attention these people had invested in the planning and execution of their interiors.

In my experience, furnishings and decorations are always in a state of quiet civil war. The forces on one side are a shabby undisciplined infantry of things handed-down, borrowed, bought in desperation and occasionally given. On the other side there is the dashing cavalry of my good taste. For most of my life the cavalry has been hopelessly outnumbered. Gradually, month by month, year by year, it gains a little more ground. But final victory is always a long way off. What was so striking about many of the scenes from Signs of the Times was the absence of any evidence that the war had ever been fought. Instead there was a kind of terrifying peace. Terrifying because this peace so often looked like tyranny: enforced pacification. It was like so many little kingdoms cluttered with miniature triumphal arches to victorious campaigns of home improvement. There was no room for dissent. Conquest was absolute.

That is why it was such a relief occasionally to come across some small outpost of anarchy. In this series it was represented by a Scotsman who boarded up his windows with cardboard and collected empty champagne bottles, and a woman whose flat was so full of accumulated rubbish it looked like she'd moved into a skip. Both lived alone. But they seemed no less confident and settled than any of the neighbours with their Year Zero design schemes. What made these instances so strange was not that their taste was bad but that it was indescribable. Literally. Most other subjects were all too easy to classify according to a kind of media-sociology of taste. Their interiors were as often as not an invitation to read off a set of ambitions, priorities and convictions - straight from the surface. (Yet rarely did they show much about what their inhabitants actually did.) To be sure there were a number of shades between these extremes. There was the elderly couple who were so tyrannised by the sense of their own poor taste they hadn't dare ask anyone into their house since the Kennedy assassination. And there were the partners who seemed to live in a constant state of guerrilla warfare - her tossing fluffy pink hand grenades at the steel-grey fortress of his racked sound-system, while he prepared the airfix Porsche for another round-up of her plaster elephants.

But the Scotsman and the skip-woman were off the normal scale, beyond easy laughter. They reduced things to a kind of silence - which is exactly what made them so interesting. The qualified success of Signs of the Times was that it showed examples of taste but said very little about them. (Although I was originally put off by what seemed like a knowing-better tone in the editing, this bothered me less as the series developed.) Placed against the queues of patronising snobs who are habitually wheeled out to pontificate on such subjects, the series must represent a considerable advance.

All the same, I can't help thinking the programmes missed something. Perhaps it was a smartly cropped photograph of the producer's living room positioned above the legend: 'Though I would never admit it publicly, I feel I have rather superior taste'.1

1. Nicholas Barker quoting himself in Signs of the Times. Published by Cornerhouse publications, 1992, p.l

SIgns of the Times: a portrait of the nation's taste was shown on BBC2, January/February 1992