At Sophie Tappeiner, Vienna, the artist highlights the ways in which Kurdish culture is expressed at the intersection of myth and reality

London-based artist Jala Wahid’s latest solo exhibition, ‘Newroz’, at Sophie Tappeiner takes its name from the festival held on the March equinox to celebrate Kurdish New Year. Through dancing and the lighting of bonfires, Kurds not only welcome spring but also imagine freedom from oppressive governance. In a bid to curtail Newroz festivities, the Turkish government banned the Kurdish variant spelling of Nowruz, the Iranian New Year celebration. Yet, the fiery rites of Newroz which reflect the 21 sunrays of the Kurdish flag, still signal a fierce sense of belonging to the Kurdish people – a symbolism that is integral to Wahid’s artistic practice.

Mounted on facing walls, the two large cast suns – the deep green Vernal Pyre (all works, 2019) and the orange-gold Threatening Our Shimmering Flag – likewise recall the solar symbol on the Kurdish flag. Evoking the perpetual celestial rotation, the suns bear witness to the unceasing cycle of life events – birth, celebration, death, mourning – across time. On the floorspace between the two suns stand several colourful casts of women’s legs in purple, red and brown (Billowing Thighs Of Spirits, Halo of Lashings and Ablaze and Sashaying). Uniformly contrapposto, these voluptuous lower bodies appear swathed in cloth-like folds, drawing attention not only to their sashaying movements, frozen in time, but to the thinly veiled flesh beneath, foregrounding how femininity can be constituted through dress. Elsewhere, two headdresses made from jesmonite, taffeta and miyuki beads – Cindering Wreath and Gossamer Dawn – resemble women’s traditional Newroz attire.

Wahid’s arrangement of suns, headdresses and legs suggests a figure-ground relation, yet the components do not fully cohere. What could be interpreted as a reconstructed scene of festive dancing is obstructed by the boutique spotlighting of each work which causes relation and scale between figurative elements to be confounded by the shimmering of beads, jesmonite and fibreglass. Similar to the opposed cast suns, the lighting’s sharp contrast points to the diurnal-nocturnal rotation and reinforces the coexistence of mourning and celebration, both central to the meaning and expression of Newroz. By substituting fragmented representation for mimetic depiction, the artist underscores the diasporic reality of a people whose politics is mediated by symbolic language.

The rolling sound of a drum, emanating from the gallery basement, creates an energy which suggests that dancing, if not apparent, is at least anticipated. Downstairs the looped video Fiery Father features a sequence of English intertitles in a custom typeface that mimics Arabic script. Lines of a poem, written by Wahid, pulsate to the beat of a daf – an Arabic and Persian frame drum – while a moonlit pool of oil oozes in the background of the film. The title of the work refers to the Baba Gurgur oil field in Northern Iraq – the so-called father of fire – that has been burning for millennia and whose control is disputed by Kurds. In contrast to the static and spotlit sculptures upstairs, the flashing text and beat of Fiery Father eventually unfold the performative centre of the Newroz festivities and the daf calls me to bear witness, to dance: ‘Dancing in defiance of death and gravity, born from and buried in Baba Gurgur’, as Wahid puts it in her poem, highlighting the ways in which Kurdish culture is expressed at the intersection of myth and reality through traditions that speak to nature’s cycle and to the promise of return.

Tom Hastings is a writer and lecturer based in London, UK. 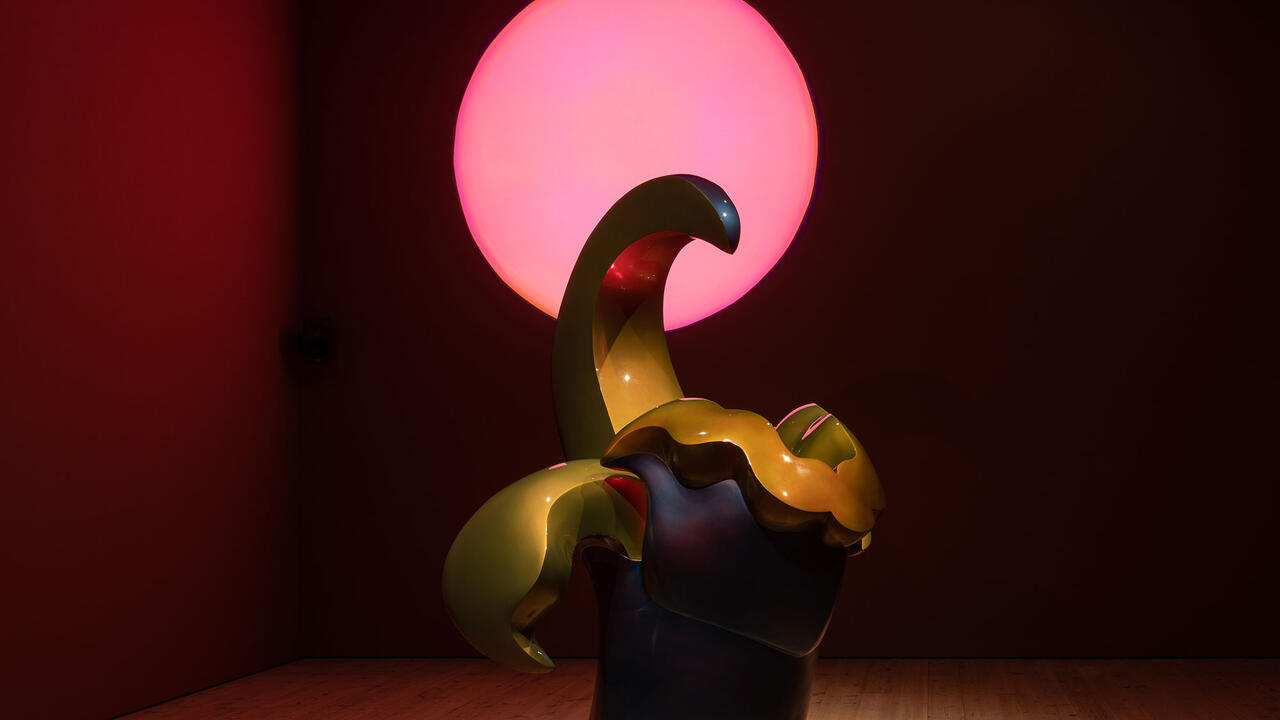