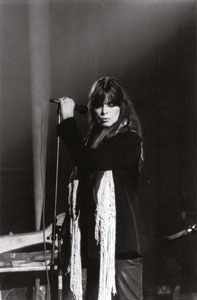 ‘I don’t think this is quite… quite what I want’, sighs Nico at the end of a demo appended to The Frozen Borderline a reissue of her two greatest albums, The Marble Index (1968) and Desertshore (1970). If we still think of Nico as pure glacial persona, not an artist with agency and ideas of her own, it is largely because her recordings with the Velvet Underground – and also Chelsea Girls (1967), her first, chamber-folk, solo album – work strenuously to offset, not match, her affectless voice. (Note how she never gets to share a song with John Cale’s viola drone on The Velvet Underground and Nico, 1967.) The genius of these albums consists in Nico’s having found a sonic palette that very nearly replicates the voice, an instrumental mirror for her stentorian vowels and long, lifeless sibilants.

On the advice of Leonard Cohen (who knew a thing or two about playing to one’s weaknesses), Nico had taken up the harmonium: it wheezes and yawns in perfect consort with her desiccated vocals. It’s that sound, allied with a certain limited array of lyrical tropes, that has given The Marble Index, in particular, a reputation as one of the bleakest records ever made. For sure, even blissful spring afternoons tend to cloud over an hour or so into this collection, as the singer urges us to ‘sink into a slumber till the end of time’. But the familiar imagery of Nico as Goth precursor, Aryan witch, opiated hag, is hardly the point here. The Marble Index, with its lyrical conjuring of fading light and frozen lands, is expressly an experiment in staying still: its songs unfold without ever going anywhere. Its producer, Frazier Mohawk, called it ‘a hole you fall into’, but it’s more accurately an endless, vacant plain.

These two albums may well be the true, sung, bridge between the New York Minimalists of the late 1960s and Brian Eno’s ambient records of the late 1970s. They are also more affecting than mere genealogy suggests. The first album is the more successful, because it’s more austere. John Cale’s arrangements surround Nico with piano, viola, guitar and glockenspiel: none of it compensates for the absent centre that is the singer. Whether the voice is phased and distant, buffeted by clangorous piano (as on ‘Facing the Wind’) or precisely elaborating its own fading away (‘Frozen Warnings’ and ‘Evening of Light’), it remains at once strident and, somehow, scarcely there. Throughout, Nico’s lyrics sketch a meteorological sublime that is only slightly redrawn, to more colourful effect, on Desertshore.

It’s instructive to recall that The Marble Index pre-dates certain key sonic and vocal wig-outs of the era: it was released before The Stooges (1969), before Yoko Ono/Plastic Ono Band (1970), (just) before Jimi Hendrix’s Electric Ladyland (1968), before Tim Buckley’s Starsailor (1970). Oddly, it’s perhaps to the swallow-tailed vocal swoops of the latter that Nico’s flightless treks ought to be compared. Both singers imagined a form of ‘rock’ – i.e., nothing like rock at all – that was uncentred, aching and elemental. Also, somewhat inhuman. Where Buckley’s imagination was oceanic, Nico’s was snowbound. On these two albums she was not really the ice queen of legend, more the territory in question itself – she had become a kind of vocal tundra.