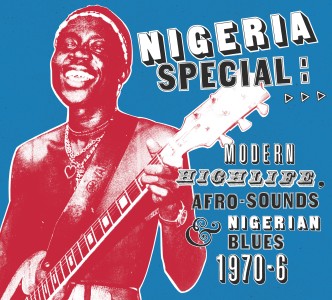 The 26 tracks collected on the second installment of the excellent Nigeria Special compilation were all recorded in Nigeria during the aftermath of civil war, the conflict that, between 1967 and 1970, claimed around 30,000 lives. The Biafran War – so-called because of the southeastern provinces’ attempted secession to form an independent Republic of Biafra – began seven years after the country gained independence from colonial rule, effectively halting a fertile period of economic growth. The fighting fractured newfound national confidence and confused cultural identity, causing many Igbo musicians – who played the Afro-rock and highlife featured on the compilation – to leave the recording studios and concert halls of Lagos for their eastern hometowns. Indeed, some groups on Nigeria Special, like The Force 7, even learnt to play in police or army bands.

While not exactly covering highlife’s last gasp, Nigeria Special traces a period that falls after the best-known recordings of original ‘King of Highlife’ E.T. Mensah and before those of Fela Kuti. Mensah’s heir to the highlife throne, Rex Jim Lawson, died in a car crash in 1971, and Celestine Ukwu was one of the most popular performers to fill the gap. Along with St Augustine & His Rovers Dance Band and Mono Mono, Ukwu’s more subdued take on the sound, with lilting guitar lines and vibraphone, is one of the many highlights on this wide-ranging, revelatory compilation.

Unusually, Nigeria Special’s emphasis is on recordings made east of Lagos – previous collections have focused on music from the Yoruba speaking capital, as there were few recording studios outside of Lagos and Onitsha. Other compilations, such as Rough Guide’s well-meaning series, have tended towards a totalizing approach to modern West African music, jumping between different countries and decades to create potted histories that always seem to end with Kuti. Nigeria Special does not intend to tell highlife’s knotty tale and is all the better for it.

What is now called highlife began in the colonial 1920s, military brass bands learning Trinidadian calypso rhythms, remaining tied to traditional Ghanaian music while adding multiple guitars. World War II introduced American swing to the mix, yet, after the war, highlife bands still playing in the older tradition were being overtaken by rock- and soul-influenced bands. Many acts, like The Sahara All Stars, diversified, while others left Nigeria to find careers abroad playing with disco or soul outfits. The compilation stops short of highlife’s later decline; the mid-1970s was the last time bars in Lagos, Enuga or Port Harcourt saw crisply-suited old-style highlife bands mixing with a younger, Cuban-heeled psychedelic crowd.

Compiler Miles Cleret’s passionate sleeve notes acknowledge that this is still early days for re-releases from this chapter of West African music, but the beautifully packaged Nigeria Special has set an impressively high standard.

Reviews , UK Reviews
Behind the Scenes of Colombia’s Street Parties