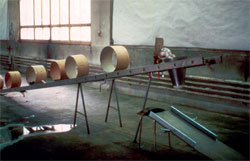 I work nights. To a greater or lesser extent, most people in the art world do. Consequently, I don’t get to the cinema much. My salvation has been DVDs, which I buy cheap and hoard jealously. True relaxation is coming home after a hectic day or night out and watching old favourites, to the point that I have them memorized as I once did poetry, and visually ‘deconstructed’ them as others now do ‘texts’, though that flatters some of the most enjoyably awful examples.

It was with surprise, then, that, on a recent visit to China, I began to notice in the cramped apartments of the young artists that I visited comparable collections of classic and not so classic films. Soulmates of the small screen! But when I calculated the costs against the far lower incomes of my hosts, I was puzzled until it was explained to me – with an indulgent smile, as if a total naïf were in their midst – that all, from the most esoteric to the mainstream, were pirated. Envy seized me, since nowhere that I know of on the streets of New York are Fritz Lang or Jean-Luc Godard being bootlegged. Then, at the end of my studio visit and with the same matter-of-factness as this explanation, I would be handed DVDs to take back with me to America to watch at my leisure. In a country where knock-offs of big-ticket media items are cheap, high-quality low-circulation images are generously offered.

Jump-cut to the elaborate vitrines Matthew Barney created to house slipcased copies of his ‘Cremaster’ (1994–2002) series discs, each more gaudily packaged than the last – and more expensive. Now zoom in on the look of proud possession that graces those who have just managed to snap up the last in a limited-edition release of the newest video sensation in London or in Basel, and then segue to the face of the person touring the collector’s showcase living-room while trying desperately to watch all of their latest acquisition, knowing it may be their only chance to see it. Now insert a short Christian Marclay-like collage of clips representing all the snippets of video the average exhibition-goer has glimpsed in the course of a year of ducking in and out of, the claustrophobic black boxes in which this art form is customary presented and to which it is restricted, owing to the economies of scale that govern its availability.

You don’t have to have worked for an ideal-driven alternative distribution network, as I did in the 1970s – Video Data Bank rented interviews with artists, along with works from the Castelli-Sonnabend archives and new tapes by most of the leading figures in the field – nor would you have to have read Walter Benjamin’s ‘The Work of Art in the Age of Mechanical Reproduction’ (1936) to guess where this is headed, though familiarity with both the history and theory of mass media helps to understand how far this most easily reproducible, potentially most democratic of pictorial formats has come (that is, strayed) from its innovative, relatively open-access origins.

Of course, its recent detour into deep market waters has stripped video, like photography and most Conceptual modes of the multifariously rebellious 1960s and 1970s, of the a priori virtue of not being coveted and commodified like painting, although stubborn denial and rhetorical self-deception have meant that the argument dies hard even in the face of escalating gallery and auction prices. Nevertheless, much video is still focused on what is best done inexpensively – Disney, Pixar and Viacom be damned! – and signal examples can be had for as little as their mass-media equivalents. Peter Fischli and David Weiss’s Der Lauf der Dinge (The Way Things Go, 1987) has been selling well for years in museum shops and in-the-know video outlets for roughly $20. Meanwhile, like Data Bank but on a wider scale, since 2004 Julieta Aranda and Anton Vidolke’s e-flux video rental project has been establishing video library outposts in New York, Amsterdam, Berlin, Frankfurt, Seoul and Vienna, travelling archives which provide free rental .

But much more could be out there if artists and dealers recognized that a culturally and, from an financial standpoint, numerically significant constituency for video art exists, which would be willing to spend regularly at the same level for the opportunity to watch and re-watch single-channel works. Indeed, many of those works would be seen for the first time in their entirety, which is worth the sacrifice of their not always being viewed under optimum conditions. Furthermore a more dedicated, or at least an increasingly well-equipped, group is prepared to screen two- or three-channel works when needed. On the other side of the coin, growing fatigue and irritation plague much of video’s captive audience in galleries, fairs and marathon exhibitions, turning possible enthusiasts into hit-and-run samplers, secret avoiders or outright enemies.

In short, the time has come for video to return to its technological
roots in order to find its wider public. If it doesn’t, then much of that public will eventually drift away or be sucked into the slipstream of cable, while the rest of us follow the Chinese precedent and bootleg on Broadway what is pitched to the carriage trade in Chelsea. But since I am both insatiable and overworked, I’d rather pony up the 20 bucks; so if there are any real entrepreneurial capitalists still out there among the deal-makers, your customer is calling.