The Mount Analogue, A Novel of Symbolically Authentic Non-Euclidean Adventures in Mountain Climbing (1944) is an unfinished novel by the French Surrealist poet and writer René Daumal. The book describes a group of intellectual-cum-mountain climbers who aim to reach the top of Mount Analogue, even though its existence is uncertain. It’s a metaphor for the quest for a type of mystic knowledge obtainable only through metaphysical experience. The book was recommended to a young Adelina Cüberyan von Fürstenberg – the curator of the first edition of STANDART Triennial of Contemporary Art in Armenia – by Méret Oppenheim; Daumal’s novel (which also inspired Alejandro Jodorowsky’s 1973 film The Holy Mountain) is the starting point for the first triennial of contemporary art in Armenia, presented in two parts and held in various cities in the small Eurasian republic: Gyumri, Yerevan, Kapan, as well as a writer’s resort at Lake Sevan.

Following Armenia’s defeat to the Turks in 1921, the imposing Mount Ararat is now found in the extreme east of Turkey and due to unresolved historical-political tensions – the border between these two countries is closed – for Armenians, especially those based in Yerevan, Ararat is a sort of Mount Analogue: visible, sacred, but inaccessible.

Daumal studied Sanskrit and adhered to the teachings of the Armenian philosopher and mystic George Ivanovič Gurdjeff, who was born in Gyumri in 1872. The city is the birthplace to several other Armenian artists and intellectuals such as sisters Mariam and Eranuhi Aslamazyan and sculptor Sergey Merkurov (who was Gurdjeff’s cousin). The museum dedicated to the Aslamazyan sisters – which contains some 620 works the sisters made during their numerous travels, across Africa, India and China – plays host to videos by Murali Nair, Idrissa Ouédraogo, Rosana Palazyan, Jafar Panahi and Jia Zhangke which dialogue with the places the Aslamazyan sisters visited and painted between 1930 and 1950. In The Crossing (2008) by Murali Nair, for example, we follow the story of a woman in her native Indian village who, in her dress, recalls the women Mariam Aslamazyan encountered and painted on her travels in India decades before.

At the Sergey Merkurov Museum and the Museum of National Architecture around a dozen artists, including Ayreen Anastas & René Gabri, Riccardo Arena, Marta Dell’Angelo and Thibault de Gialluly, use forms of language to compare geography, literature and performance. While travelling throughout Armenia, Benji Boyadgian mapped the land’s geological layers and held a workshop on the citizen’s perceptions of Gyumri in 2007, using the results to compose a group atlas of emotions. Other interventions were of a linguistic type, such as that by Giuseppe Caccavale who copied verses from the poem 'Journey to Armenia', written by the poet Ossip Mandel’stam in 1930, in large books and on walls (Armenia, Ossip Mandelstam: Dessins, 2014, ARMENIA IV, 2017), and Mikayel Ohanjanyan’s carved texts into basalt (The Doors of Mher, 2017). These works are fitting given that books have always been the privileged means for the conservation and transmission of Armenian culture: just consider the Matenadaran, the library-museum of ancient manuscripts in Yerevan.

In Yerevan, the first part of the triennial, ‘The Mount Analogue. A Contemporary Art Experience’ (which ran till 10 October), was held across the former seat of the Armenian Parliament, The Armenian General Benevolent Union (AGBU) and the Hay-Art Cultural Center: the first art space in the USSR to specialize in modern art. Designed by architects Jim Torosyan and Gevorg Aramyan in 1972, it demonstrates the perception that Armenia was an ‘eccentric’ socialist republic in the Soviet galaxy; where contemporary art was presented in an institutional venue, unlike the clandestine role it was forced to play in Moscow or other Soviet-bloc satellites. Here we find 20 Ways to get an Apple listening to the Music of Mozart and Concert for a Fly (1997), Ilya and Emilia Kabakov’s surreal and poetic installations that emphasize their passion for the Austrian composer, whose pieces were performed live by the Tchaikovsky Special Music School musicians during the opening days in July. The solo show of work by Gaspar Gasparian (1899–1966), hosted at AGBU, presents for the first time outside his native Brazil a collection of images by the photographer illustrating his Armenian origins – the artist’s family escaped Armenia before he was born but Gasparian embraced the experiments of Rodchenko and the Russian constructivists using optical distortions and abstract transformations in documenting urban objects and scenarios in São Paulo.

The second part of the triennial, ‘Déjà vu STANDARD’, curated by Ruben Arevshatyan and which runs till 31 December, was inaugurated on 12 September in Yerevan with a monumental site-specific painting by Felice Varini in the city’s railway station, transforming the vaulted space into a constructivist kaleidoscope. The Writers’ Resort on the banks of Lake Sevan – designed by architects Gevorg Kochar and Mikael Mazmanyan in 1932 and one of the most significant sites of avant-garde modernist architecture in Armenia – aptly hosts an exhibition including Gerard Byrne, Josef Dabernig and Igor Grubić.

Once located on an island, and today sitting on a reclaimed peninsula, the Sevan resort stands as a monument to the past and questions some crucial unresolved aspects of modernity. Using different languages and techniques, Byrne, Dabernig and Grubić reflect on the utopias and dystopias of the past and present. Dabernig is fascinated by Eastern European modernist architecture, and the abandoned buildings he came across on his travels through the region have often become the subject matter of his films, such as Hypercrisis (2011), shot in the recreation home for Soviet cinematographers in Dilijan, Armenia, before it was demolished. If Grubić documents what remains of Socialist monuments which testify to a near past screaming to be forgotten, Byrne recreates past events using professional actors. A part of the show is devoted to the modernist architects who designed the iconic Sevan resort, a recipient of the Getty Foundation ‘Keeping it Modern’ grant for the conservation of modern architecture.

STANDARD is the name of the avant-garde Armenian magazine published only once in 1924 due to Soviet censorship. It’s a fitting referent for ‘Déjà vu STANDARD’ which creates time-lapses where past and present intermingle. If this first triennial can be considered an homage paid to past experience with the will to project it into the future, it’s clear that after Armenia's international recognition in winning the national pavilion prize at the 2015 Venice Biennale – for an exhibition also curated by Adelina Cüberyan von Fürstenberg – the groundwork has finally been laid for a future-facing art scene to emerge. 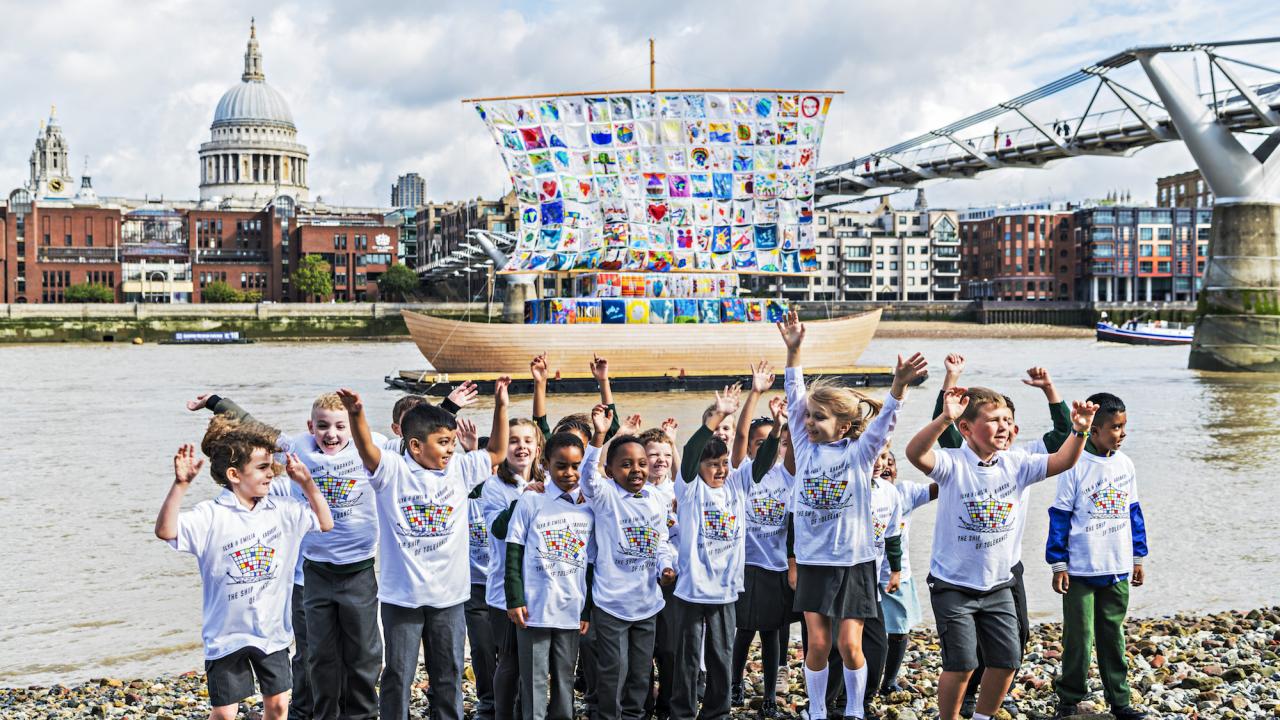 Frieze
The Ship of Tolerance