With his acts of everyday absurdism, Polish artist Cezary Bodzianowski holds up a mirror to an institutionalized world 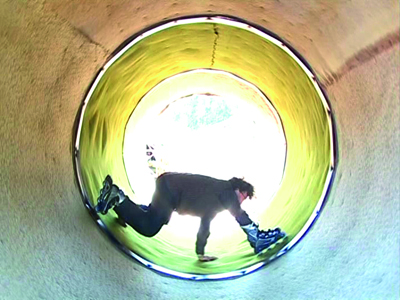 ‘The face must be square to the camera with a neutral expression, neither frowning nor smiling, with the mouth closed.’1 When applying for a visa, these are the requirements for ID photographs requested by many governments. You can try to put on the right face, but be prepared to fail. If you have ever queued up for official approval by the authorities, you will know how hard it is to do the right thing when the eyes of the law are on you. Even when a neutral demeanour is required, people tend to overstate their case. They tell long-drawn-out stories or produce letters of recommendation and try out any attitude, from submissiveness to arrogance, in their efforts to convince. Some people eventually explode, but most do it fully aware that it will get them nowhere. Their anger just gives way to a profound feeling of resignation.

Slavoj Žižek has argued that the power of ideological regimes resides in their obscene capacity to incite a deep sense of guilt in their citizens; the feeling that you should know what you are guilty of but fail to see it.2 This explains why people perform so desperately before the authorities – to assert the innocence they lose the moment they start performing. It is also why, no matter how truthful you are, filling out forms always makes you feel as though you are cheating. Žižek describes the experience of life under socialism in these terms. But similar rituals are still performed daily at the desks of banks, airline companies, social security offices or embassies in the Western world. Resignation just expresses itself differently, most commonly perhaps in the impotent rage of the screamed request to ‘see the manager’ (he won’t care, and you know it).

Cezary Bodzianowski is done with all of this. In his art he has found a way to meet the eyes of the law and face up to its demand to perform by creating a character for himself that is virtually unassailable. This character is Cezary Bodzianowski, the artist himself. In this role Bodzianowski stars in the majority of his works. They tend to be photos or short videos that show him striking a pose or performing simple acts in everyday situations. Most are taken on the spot by his partner, Monika Chojnicka. His acts and poses are more or less absurdly at odds with his surroundings, yet all of them are characterized by a certain conspicuous inconspicuousness. Bodzianowski has mastered the art of assuming a perfectly neutral expression in any situation, ‘neither frowning nor smiling, with the mouth closed’. He never seems particularly happy or sad, angry or pleased. He doesn’t ever speak either. His appearance is positively impenetrable. No court in the world could impugn this man’s motives. There is no way it could determine what moves him. The only trace of mockery that might be discerned in his features is the little moustache Bodzianowski has had ever since he started performing as himself. It is that little patch of hair beneath the nose that Charlie Chaplin and Adolf Hitler had in common. As such, it is a small visual reminder that something might not be quite right with the man. You may, for example, suspect a hint of travesty when you see him pose with this moustache for a photo shoot next to his father in a parade uniform studded with medals (Father and Son, 1995, taken at ‘Mr Twardowski’s photo studio in Chełmo’, as we are informed). But a little facial hair is hardly enough evidence to build a case against anyone. So the artist remains untouchable in his facial neutrality.

Over the years Bodzianowski has appeared in different places and different guises. The documentation photo of Verandah (2000), for instance, shows the artist wearing a dressing gown and pyjamas standing inside the metal barriers around a manhole beside a road. With his arms resting on the barrier he assumes the posture of a man contemplating life from his balcony on a sunny morning. In Serenade (2006) we see him sitting on the edge of the flat roof of a Modernist building watching the sky, feet dangling in the air – a small, solitary figure on top of the world. Despite their absurdity, neither of the two situations is made to look like a dramatic event. On the contrary, the equanimity with which Bodzianowski performs makes it look as though he has been doing this every day of his life. The isolation of the artist is presented not as a moment of crisis but as a state of normality. Of course, there is also trouble, but Bodzianowski just deals with it, impassively. In the DVD Luna (2006) he can be seen struggling to stand upright inside a rotating barrel on a playground with roller blades on his hands and feet. He never succeeds, but he continues nonetheless. Neither ambitious nor desperate, he simply carries on.

Despite isolation being his permanent condition, the artist never lays claim to the heroic status of the solitary outsider. On the contrary, he obviously loves people and tries to belong. For Nattahnam (1996) Bodzianowski visited the family who lived upstairs from the gallery that had invited him to do a show and stayed in their apartment for 16 hours with the declared intention of ‘blending in with the family’s way of life’. One photo of the performance shows the artist standing perfectly still in the living-room as though he is seeking to pass as a piece of furniture or merge with the Draylon curtains by mimicking their drabness. Surprising semblances are also achieved in the photograph The Petty Thoughts of Others (1996). Here the artist poses for the camera next to an elderly lady in the gentle surf of the Baltic Sea. She wears a black bikini top, and he wears a white bra. Their solid posture and portly stature seem quite alike. Were it not for his moustache and speedos, you might take them for sisters. In Manus Nigra (Black Hand, 1997) Bodzianowski realized this wish to be more than one person by playing a simultaneous chess tournament against a room full of contestants, constantly switching tables and games and consequently losing all of them.

These attempts to take the place of others show that what underpins Bodzianowski’s efforts to approximate a posture of neutrality is less a sardonic insouciance than a sense of existential solidarity. Through his neutrality he seeks to embody Everyman. So Bodzianowski the artist is also Bodzianowski the universal citizen. In the life of the citizen-artist a distinct biography is dissolved into a series of improvised poses that reflect the contingencies of his surroundings. He could be anyone and belong anywhere, and thus he, as Giorgio Agamben has it, ‘appropriates belonging itself’.3 As this condition, however, is marked by his constant failure to be what he poses as, the citizen-artist emerges as a total singularity by default. Always responding to what the situation seems to require, he nevertheless fails ever to do the right thing and fit in. In a sense, this is the key to the philosophy of slapstick. The genius of slapstick performers such as Charlie Chaplin and Buster Keaton lies in their ability to enact the condition of the modern citizen who (like a character of Franz Kafka’s) finds that in the eyes of the law nothing he does can ever satisfy. Keaton practised this to perfection. The characters he plays are positively incapable of doing anything right. Yet they do everything wrong with such persistence that they succeed in turning the law on its head. They create a mirror world in which all standards are met (and they find love and happiness) because everything is exactly how it was not supposed to be. Through this displacement they redeem all citizens. As it transpires that there is no way to fulfil the norm, everyone is absolved from the unreasonable demand to meet its standards.
Indeed such promesse de bonheur is also present in Bodzianowski’s work. Look at Rainbow (1995), for instance. The photo shows the artist forming an arch with his naked body, his feet in the bathtub and his arms stuck down the adjacent toilet. A magnificent rainbow is painted across his arched body. This citizen is not guilty. He is a lucky man. By unremittingly inhabiting the condition of his own failure he displaces the very notion of success and promotes an almost imperceptible Utopia. In the photo Golden Hand (2001) you can barely see the artist’s arm protruding from within the golden dome on the roof of the Secession building in Vienna to hail the sky with a victory salute. But it’s there. More often, though, bliss for Bodzianowski arrives not in triumphant moments but in everyday ones. The sculpture Holy Footstool (1996), for example, is a mundane footstool, crowned with a makeshift halo. Agamben calls the halo ‘the vibration of that which is perfect, the glow at its edges,’4 and he continues: ‘This imperceptible trembling of the finite that makes its limits indeterminate and allows it to blend, to make itself whatever, is the tiny displacement that everything must accomplish in the messianic world.’5

Hence, in the mirror world of slapstick performance, all things that are rightfully out of sync and out of place should be indicated with a little halo to celebrate their difference – or a moustache, for what is Bodzianowski’s moustache but another such marker of a tiny but insurmountable difference? So citizen-artist Bodzianowski may in fact also be a saint. You could call him the patron saint of everyone who is indivisibly different. Prym (2001) underscores this point. The work is a beautiful sculpture composed of three small flat objects lying on top of each other. One is made of wood, one of zinc and the other of iron. The largest measures 21 centimetres square. The note that comes with the piece reads: ‘A destruct [sic] of a sculpture, lent by the Centre of Polish Sculpture in Oro´nsko. Following a long search and the artist’s urgings, the work was finally found under a pine tree in the Centre’s park.’ This pile of stuff epitomizes precisely what is left over when the institution is finished with you: the ‘indivisible remainder’ (as Žižek puts it), the little pile of shit to which you are reduced under the eyes of the law. Yet, as Prym shows, this is precisely the state in which all things will be found and have their dignity restored. That he keeps up the faith in this potential for redemption should be reason enough to promote the sainthood of citizen-artist Bodzianowski. Amen.