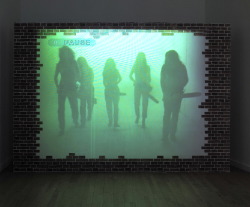 In Olaf Breuning's video installation First (2002) an irascible young neurotic recounts a series of events that occurred when he was bored senseless. Something tells you he watches a lot of films: first he gathers his trailer trash buddies in the car park for gang ceremonials (like Eminem in 8 Mile, 2002); then they hop in the car to go beat up an Amish man (like Witness, 1985); and when they find him, they strip him and cover his face with an ET mask. If it is a frequent complaint that today's youth can't tell the difference between fiction and reality, it is surely all the more alarming when they can't tell one film genre from another.

Swiss-born Breuning originally trained as a photographer but moved to New York three years ago. It suits him: as this spellbinding survey of recent work displays, Breuning likes his culture vulgar and various. Throughout the video installations, theatrical tableaux and photographs he moves easily between sci-fi, Western and horror, and the point appears to be less that styles are blank sheets available for pastiche than that a vulgar imagination maintains few boundaries.

Ugly Yelp (2000), the black and white video projection with which the show opened, seems to follow from a similar scenario to that in First. Excitable youths are filmed acting out sequences from various horror movies on a jittery hand-held camera in the style of The Blair Witch Project (1999); a Death Metal soundtrack urges them on. One would-be psychotic paces back and forth on a dockside holding a knife; another man jerks a pram around until the contents fly out; 'zombies' lumber through the fog holding chainsaws; and something like necrophilia is simulated in a dark wood. It's an atmospheric send-up, but its speed and fragmentation lend it the impression of a mere trailer for the fuller Breuningworld to follow.

Unfortunately the three video installations in the show never quite deliver the full-length feature: Breuning's narratives can be very opaque in their structure, and are not helped by opacity in their detail. In King (2000) there is more engaging confusion: a tattooed, dreadlocked man races through the desert, dons a knight's armour - over which he wears shorts - flings a sword around and runs off. Later the film becomes a kind of pop video, with a parade of figures in blackface and others in ghost costume.

Breuning is interested not so much in narrative, however, as in the uninterrupted sweep of a vision. This no doubt explains his penchant for submerging his videos in novel installations: First is projected on the white sheet that falls from the back of an ET figure; the projector in King is buried under a life-size knight. It may also explain the quality of his many photographs, which, while they have little interest in print quality and whatnot, are far more momentous than the usual stills that video artists produce to fund their projects. Breuning is a visionary of Gothic excellence, and should he ever want a year's residency in hell, Lucifer would surely oblige him.

When I visited Magasin, an amusing debate was going on among gallery staff as to what most scared the daylights out of parties of schoolchildren. Lynchings and necrophilia were no problem, but what really had them running for the door was Apes (2001). I could sympathize: arranged around two edges of a gallery was an ersatz habitat for several groups of primates, each gathered around a fire. An ominous hum filled the air, smoke puffed from the fire and the apes' eyes began to flash as if they were in telepathic contact. Cries and whooping rose from the darkness, the undergrowth turned red, and then ... then there was a trumpet symphony of belching. We laughed, but not in comfort.

Laughter, like everything else in Breuning's art, heads fast to the grave. In his final installation, Hello Darkness (2002), a full-breasted sex doll reclines, clutching a large axe half in, half out of a funeral casket. As more smoke billows from beneath her and a spiral of blue light turns on the wall, she talks in synthesized speech to a skeleton which sits on the floor beside her. She wants to come over to the other side. 'Tell me, Death', she squeaks. ' Do you see flowers? ... Is it only dark? ... Are you sad? ... I was always wondering how many bones we have.' Again, it's funny, but it was really no laughing matter.