The film opens with a calm still life: a red ping-pong paddle lying beside an outdoor pool framed with an antique key-pattern mosaic – recreational sports with a hint of decadence. Birds chirp. The camera hovers over the leaves of a laurel tree as a male voice declares: ‘The first man to compare the cheeks of a young woman to a rose was obviously a poet; the first to repeat it was possibly an idiot.’ The voice belongs to an angular fellow with gelled-back hair wearing an elegant white t-shirt and beige trousers, like a young Jeff Goldblum hanging out at a 1940s’ Hollywood hacienda garden party.

He continues speaking to the camera while lazily returning some of the table-tennis balls volleyed at him. ‘This neo-dada, which they call new realism, pop art, assemblage etc., is an easy way out, and lives on what dada did,’ he declares. We catch glimpses of the two guys in sunglasses that he seems to be spending this lazy, sunny afternoon with. One of them, wearing an inconspicuous shirt and bermudas, brings a tray with glasses and a bottle of some noble distillate, while the other – a bare-chested, bearded, shock-haired beatnik type – is at the other end of the ping-pong table.

The first says: ‘The newest generation believes, in good faith, that their neo-dadaism is more sublime than the art of Praxiteles.’ Suddenly, his counterpart swats the ball so hard it sails beyond the table; it’s as if he can barely suppress his anger at the mention of the Greek sculptor who created the Aphrodite of Cnidus, arguably the first life-size female nude statue in antiquity. The young Jeff Goldblum-type stalks towards the ball like a stork, picking it up from the manicured lawn beneath the huge leaves of a subtropical plant, all the while continuing his stream of assertions: ‘I’m sure that when people like Seurat started to do something they really just wiped the past right out […] It seems that today, more than any other time in this century, there are strong ties with the past. It lacks audacity, originality.’

By now, I’m pretty sure that the script so far is largely comprised of Marcel Duchamp quotes. But I can’t verify it, as I stand in Francesca Pia gallery in Zurich, about one and a half minutes into the six and a half minutes of Jay Chung & Q Takeki Maeda’s Untitled (2015). The piece loops, so I can listen to it as many times as I like, but there are no credits, let alone footnotes. It isn’t until later, when I access a Vimeo link and the script of the piece (which still doesn’t give away the sources), that I can google who first said or wrote these words: the poet/idiot and Praxiteles quotes are from Salvador Dalí (befitting his characteristic mix of sentimentality and brazen hyperbole) and, while the neo-dada denigration comes from Hans Richter, the musings on Georges Seurat and originality are indeed by Duchamp – all spoken by the proverbial ‘Avant-Garde Artist’ (played by Jonathan Basile).

But now it’s the bearded guy’s turn to talk; he balances the ball on the paddle before continuing this lazy game. He, too, channels an artist, albeit this time from a later period (hence the subtly different styles of clothing). He’s the Conceptual Artist (played by Benjamin Coopersmith), expressing himself with surfer-dude panache. ‘Perhaps almost for 20 years now, we’ve been in a neo-conservative state. We’re back to all kinds of prototypical modernisms, now quoted, now so-called post-modernist snide, tickle-tickley cutesy stuff, with all of it feeding a consumerist market, of course.’ Who is he quoting and when is it from? It could have been said now, or ten or 20 years ago, but it was, in fact, uttered in 1988, in an interview with the bearded, 1950s pioneer of ‘happenings’, Allan Kaprow. 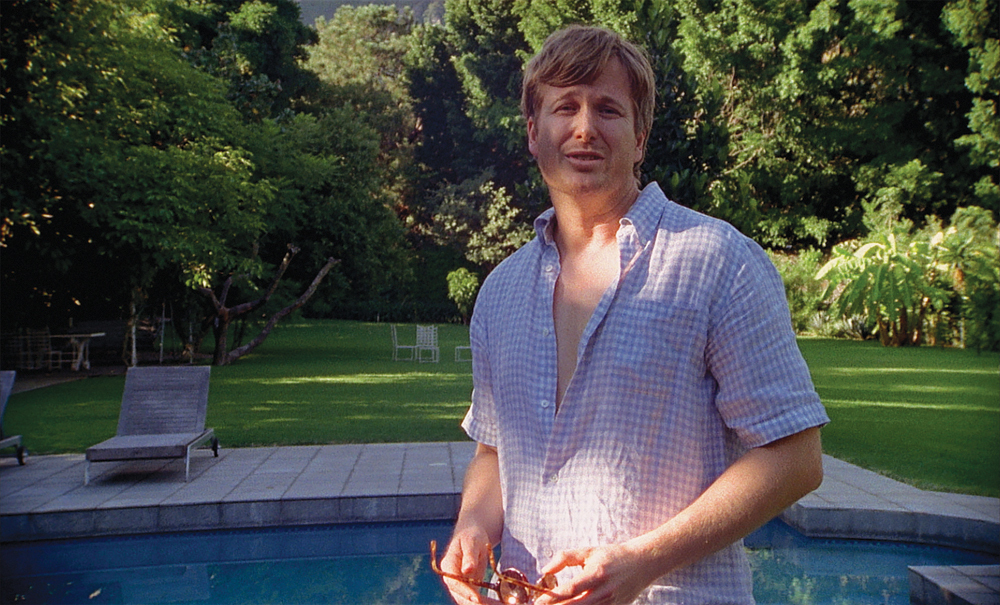 It’s pretty clear by now that Untitled’s script has been created from passages of writing by, or interviews with, seminal Western artists. The Conceptual Artist also speaks the words of Michael Asher (‘I see what they believe to be conceptualism constantly co-opted and co-opted for their own use and it becomes sort of actually fascinating – the ideology of conceptualism but not the real workings of conceptualism.’); Martha Rosler (‘It’s actually very amusing to me. It’s the devolution of conceptual art to anti-conceptual art.’); Orlan (‘Some years ago, if somebody said about your work “this has already been made before”, it was an insult […] Today, students and young artists don’t give a damn.’); and Suzanne Lacy (‘Each succeeding generation has bought the media’s version of the previous one.’)

After replacing the Avant-Garde Artist at the ping-pong table (who retires to eat a multi-coloured ice cream), the Contemporary Artist (played by Bob O’Rigammy – apparently a pseudonym) summons the thoughts of, amongst others, Mike Kelley (‘I’ve distanced myself from the neo-pop art currently in vogue. [...] It’s a non-critical reiteration of that desire-producing industry. It completely bores the shit out of me.’), Christopher Williams (‘When I started working, using existing cultural material meant you were taking a critical position – and I find a lot of younger artists that I talk to claim it’s just material, and for them there is no reason to take a position.’), and Willem de Rooij (‘In the process of referencing, artists often forget to make the art piece.’). (The quotes by Williams and De Rooij are actually taken from a conversation between the two that was first published in October 2010 in the pages of this magazine; many of the ‘Conceptual Artist’ quotes are from Conceptual Paradise, a 2006 film documentary by Stefan Römer.)

Across the sharp divide between, say, the sarcasm of Dalí and the feminist activism of Lacy, all of these artists share the idea that there is a real need for constant innovation and experimentation in art. The irony is that Untitled is a send-up of these very calls for artistic intellectual alertness, as it purposefully employs the kind of indulgent repetition and digestible convention of much lazy art: after all, these quotes are put on a loop, in a context that is anything but innovative – a retro-style filming of three barefooted guys in a luxurious garden.

But what also comes to the fore is that the quoted artists all ascribe aesthetic rigour and experiment to their own generation, while denouncing the youngsters as, essentially, a bunch of unoriginal copycats. And while the earlier avant-garde artists like Duchamp could indeed claim to have been radical innovators, the implied claim to superior criticality and originality by later artists, in comparison to generations after them, becomes increasingly questionable. 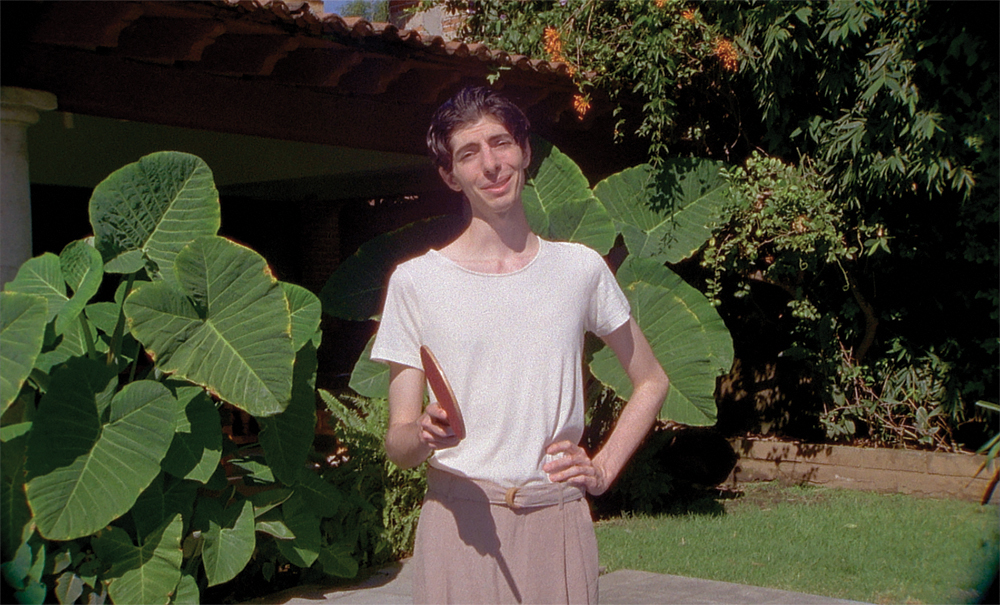 Eventually, from the very act of compiling and quoting these statements out of context, to the actors’ hipsterish delivery and unenthusiastic game of ping-pong (itself possibly a nod to table-tennis works by Július Koller, in turn adopted by Rirkrit Tiravanija), what seems to be at stake is … well, at first, not much. These historic as well as contemporary calls for artists to be alert and innovative are rendered farcical. But how does reading these lines in print, or hearing them spoken by their originators, differ from them being delivered by three part-time actors in a pleasant environment? Is this the moral of the story? Does having languid men impersonate historical figures and their statements in a wealthy setting tip these assertions from polemic and witty to whiny and preposterous? It is, of course, more complicated.

Chung & Maeda have previously explored the workings of art history. Their 2014 exhibition at Isabella Bortolozzi Galerie in Berlin focused on the Getty Institute archives of the pioneering German dealer Alfred Schmela, who, in his Dusseldorf gallery, showed everyone from Joseph Beuys to Bruce Nauman. Or, to be more precise, they focussed on the role of Schmela’s wife, daughter and granddaughter who kept the gallery going after Schmela’s death in 1980, dedicating three post-minimalist pieces to each of them, as if offering a sobering antidote to the indiscretion of exposing some of the heated or desperate gallery correspondence that Chung & Maeda had edited into a hefty A4 folder.

The dialectics of Untitled, similarly poised between slight and profound, become apparent only through seeing the piece numerous times, perhaps as this is what it’s all about: repetition and reiteration. As statements from different periods are collaged into three monologues delivered by different characters, they nevertheless follow a similar pattern. Chung & Maeda’s treatment inevitably deflates these quotes about the need for originality. Then again, it is because they are exposed as part of a bigger continuum and, at the same time, as partly self-serving and self-indulgent (it’s always the next generation that’s looked down upon as less smart and radical) that the underlying desire is confirmed as being shared by all these artists throughout history. Out of the seemingly farcical nature of the film arises a substantial observation: that modern and contemporary artists have often expressed their yearning for new and surprising ideas through their frustration with the supposed failures of the next generation. And is it through being confronted by such frustration that members of the next generation are propelled to do something surprising?

In the spirit of their own generation (they were born in 1976 and 1977, respectively), Chung & Maeda may well feel reservations towards artists born in the 1980s and ’90s, who are even more accustomed than they are to the increasingly accelerated copy-paste cycles of the digital sphere. But by putting that resentment into farcical embodiment and historical perspective, Chung & Maeda battle it as much as they expose its kernel of truth.

Jay Chung & Q Takeki Maeda live and work in Berlin, Germany. In 2014, they had a solo exhibition at Isabella Bortolozzi Galerie, Berlin, and in 2015 at Galerie Francesca Pia, Zurich, Switzerland. From 26 March to 10 July, their work will be included in ‘Roppongi Crossing’ at Mori Art Museum, Tokyo, Japan.