One Take: The Warriors

At nearly two metres high and three metres wide, The Warriors (2015) is a drawing of striking proportions by the Irish-Australian artist Donna Huddleston. Striking, not least, because the meticulously detailed scene has been rendered in Caran d’Ache coloured pencils. The title refers to a netball team from Huddleston’s schooldays in Sydney, the ‘Woolloomooloo Warriors’. Seven white girls with conventionally perfect bodies parade through a landscape inspired by the artist’s memories and impressions. It’s a place populated by bats, brutalism and a fatherly pharaoh, although he is not the only pointer to Huddleston’s fascination with Egyptian mythology. An Egyptian frieze is evoked in the arrangement of the girls’ heads, torsos and legs but, with a head turned out of profile or a hand tucked into a back pocket, these young women are obviously indifferent to ancient rules.

The drawing takes me back to a school trip I went on to Florence. The connection is less about the pastel colours and grand-scale illustrative scenes of the frescoes I witnessed, however, than about belonging to a tribe of 16-year-old schoolgirls from a south London comprehensive. Most of us had never been to Italy and the way in which we experienced the trip with a mixture of aloofness and histrionics is echoed in Huddleston’s picture. We traipsed around churches, looking at paintings that were supposed to enrich our understanding of E.M. Forster’s A Room with a View (1908), delivering typically reductive teenage observations that revealed both awe and intimidation. Though we weren’t rewarded for what I now see as an elaborate feat of creativity, one evening we performed a practical joke – possibly inspired by our daily feasts of religious art – on our teachers. In our dingy, bedbug-ridden hostel, we gathered candles and incense, faked tears and moans, stifled giggles and, with a mask made from a magazine photo of a skinned monkey, staged the Devil’s possession of a girl who was notorious for always going that bit too far. I’m sure the teacher who was finally lured into the gloomy bedroom was probably relieved that our crocodile tears had nothing to do with the nightclub up the street and its easygoing door policy. Looking at The Warriors, I think about our semi-ironic foray into the supernatural and our testing of the authorities whose powers over us were soon to end. Huddleston’s girls seem to project the potential for creating similar dramas. With heads either bowed or confrontationally meeting our gaze, their control – or lack of it – over the roles they are playing is ambiguous.

As with a clique of teenage girls, or an archaeologist’s torch flickering over an Egyptian tomb for the first time, an atmosphere of furtiveness pervades The Warriors, as tantalizingly opaque, yet luminescent, as its vast waxy surface. The relationship between the elements in the picture is mysterious, as is the one between the girls. The regimentation of their parade begins to fracture: the three on the right-hand side of the scene appear to be tempted into deviant behaviour, their hooded, steely expressions recalling the sly characters that populate the paintings of Lucas Cranach the Elder. As they pick at each other’s bikini straps or pull at one another’s hair, they seem to be entering a cave that, in this stagey context, could as easily be made of fibreglass as of stone.

It is no surprise to learn that Huddleston has worked in theatre and film design. The Warriors is as richly decorative and playfully derivative as her previous works, such as her 30-minute performance Witch Dance (2013), which included a troupe of female dancers and an elaborate hand-painted set, and was inspired by Hexentanz (1914), the extraordinary performance by the expressionist choreographer Mary Wigman. Another theme – clearly anticipated in Witch Dance – is a preoccupation with all-female spaces and the apparently psychic interactions that can exist between women or girls. This recalls a tradition in Antipodean cinema: think Picnic at Hanging Rock (1975), Celia (1989), or Heavenly Creatures (1994), in which girls – and by implication their sexuality – are depicted as both otherworldly and intimidating. Looming large, the drawing might reflect Huddleston’s own sense of threat from a group she wasn’t quite part of, but there is also surely reverence for the girls’ power, and an admission of how seductive they are. Echoing the homage to Wigman’s witchery, Huddleston seems to be falling under a spell of her own making in the laborious process that creating this drawing must have required: a time to contemplate, connect and indulge.

With Wigman in mind, it is hard not to think about the cultural appropriation of ‘exotic’ cultures by modernist movements such as art deco, a style that was revived with plasticky relish in the 1970s and ’80s (Huddleston’s formative decades). As I look at Pharaoh Akhenaten, located in the top-left corner of the drawing, it is the punchy pop and girl-group harmonies of Walk Like an Egyptian (1986) by The Bangles that resonates. Akhenaten – despite being a king and the father of Tutankhamun – finds the reach of his governance called into question here: one blood-red eye stands in clotted relief against his semi-permanent form. His other eye is transparent, an aperture to the circle set behind him – perhaps the sun, so solarized by its own heat that it appears as icy blue. The circle is mirrored on the other side of the drawing, a cartoonish moon with bats flying across it. A cliché of Halloween spookiness, it’s apparently a common sight in Sydney, which is known for its colonies of bats. Like a theatre set, nothing here feels stable or real. Circles could be suns, moons, deco motifs or lamplights around the swimming pool, shimmering but static. 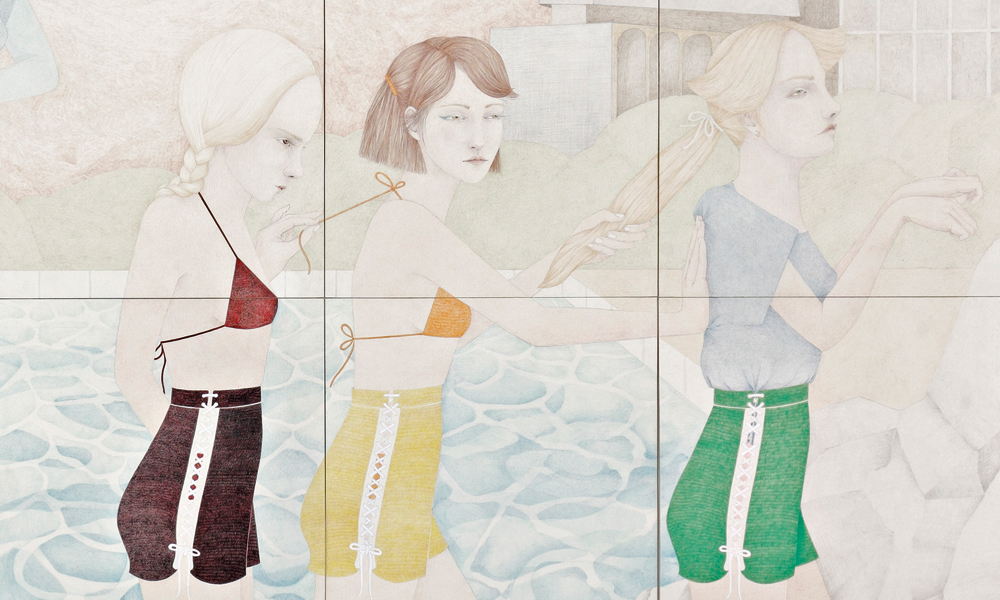 The drawing is installed in 21 panels, echoing the grid-like pattern of a rattan screen flanking one side of a swimming pool; in some ways, it evokes the murals occasionally seen in the lobbies of grand hotels. Indeed, The Boulevard, Woolloomooloo’s own Savoy Hotel of the 1970s, can be seen in the distance, its forms brutal against the waterfront. The grid has the effect of slightly distancing us, of slowing down our reading. This helps us to absorb the prisms of appropriation and revivalism spearing Huddleston’s memories: how the 1980s revived art deco, which took from Ancient Egypt; how architectural brutalism was the epitome of 1970s classiness and – most uncomfortably – how whiteness was the presiding colour of Huddleston’s girlhood in a colonized land. Indeed, the pale quality of the drawing could reflect the bleaching effect of the harsh Australian sun but, on another level, perhaps it also suggests more sinister, sources of irradiation and eradication.

The Warriors is an amalgam of so many fantasies about athleticism, femininity and the illusions of purity and teen-girlhood, it’s hard to know where to start. In the drawing, each girl wears a pair of shorts, identical in all but colour, with laces up the sides that hold the garment together like a corset, revealing their underwear. Huddleston’s attention to detail shows us the tiny bits of lace commonly used to edge girls’ knickers: every woman would recognize such a mild yet ubiquitous ‘feminizing touch’. Like the occasional bruised or bandaged knee, such details make the girls relatable, but I’m left wondering: who on this team of warriors plays defence or attack, and who are their opponents?

With something of a Shakespearean ‘aside’ about her, in search of answers, my eyes are continually drawn to the ghostly central figure of The Warriors. Like a chlorinated Lady of the Lake, she hovers above the pool, as blue as the water  she appears to have emerged from. Yet, she is clearly one of the girls, dressed in their uniform, her body, too, on the cusp of womanhood. She is arranged in a kind of yogic position, her fingers gently misaligned, more meditative than devout. Most importantly, she stares straight out at us, a hint of amusement in the set of her lips, one eye winking. Perhaps she is a warrior who met her end in a battle, or who simply slipped on the side of the pool. Perhaps she is the girl who went that bit too far, though breaking whose authority we’ll never know.

In his book Camp: The Lie That Tells The Truth (1984), Philip Core describes ‘camp’ ‘as a form of historicism viewed histrionically’. In The Warriors – as typified in the figure of the water sprite – Huddleston has reflected something of this position in her intermingling of personal and political histories. Core’s book ends with a list of things, provocatively drawn up ‘without comment’, that he believes may be admired, collected or discussed within a camp sensibility. Coincidentally, Antipodeans, girls and women appear on the list. It’s as if Huddleston has decided to add comment, albeit in the spirit of playfulness. She seems to understand that to be gendered as female can be a highly ironic experience (as perhaps it is to be gendered at all). With The Warriors, she echoes that strange reality with a voice both faint and fierce.

Phoebe Blatton is a writer based in Berlin, Germany, and London, UK. She is the editor of The Coelacanth Press, which reissued Brigid Brophy's 1956 novel, The King of a Rainy Country, in 2012. She also publishes The Coelacanth Journal.