So much has changed since our planned opening of this year’s Frieze Sculpture on the 50th Anniversary of Earth Day, April 22nd, but what has not waivered is Frieze and Rockefeller Center’s commitment to putting the art of our time in the public realm. I am particularly excited to have the opportunity to see Ghada Amer’s Women’s Qualities take over the Channel Gardens, and self-taught 94-year old artist, Thaddeus Mosely, showcase his first bronze sculptures at the apex of those gardens on 5th Avenue. -Loring Randolph, Director of Frieze New York

Usually held in the spring as part of the wider programming of Frieze New York, Frieze Sculpture at Rockefeller Center was postponed and readapted this year due to the COVID-19 pandemic. Presented in partnership with Tishman Speyer, the major public art initiative places significant sculptural works by leading artists in open, public locations throughout Rockefeller Plaza, allowing for ample social distancing space in compliance with all City and State guidelines. Offering free admission to all, Frieze Sculpture at Rockefeller Center will be on display from September 1 – October 2, 2020.

Curated by Brett Littman (Director of the Isamu Noguchi Foundation and Garden Museum in Long Island City, New York), the second edition is inspired by the site’s and the city’s natural materials of earth, rock, and plants, and by the 50th anniversary of Earth Day, the original date when Frieze Sculpture at Rockefeller Center was scheduled to debut.

Curator Brett Littman said: The projects for this year’s Frieze Sculpture deal with a range of issues including women’s suffrage, migration, urban planning, and ecology. They are also grounded in the celebration of the natural and botanical worlds, and in some cases the artists use plants and flowers as part of their sculptures. Given our world’s current urgent concerns with ecological sustainability, climate change and racial inequality – and the impact these issues have had in spreading COVID-19 – the idea of creating an outdoor sculpture installation within this discourse, could not be more relevant.

Ghada Amer (Goodman Gallery, Marianne Boesky): Egypt-born New York-based artist Ghada Amer presents an ambitious garden installation, titled Women’s Qualities. The piece was first conceptualised and installed in Busan, South Korea, in 2000 after the artist undertook a simple study, asking members of the public what qualities they found most important in women. 20 years on, the artist revisits the piece in New York, combining gender stereotypes that she encountered in Busan in 2000 with perspectives from Americans in 2020. The responses are written with flowers to create a living portrait of the impossible “woman ideal”.

Beatriz Cortez (Commonwealth and Council): Awarded the inaugural Frieze LIFEWTR Sculpture Prize, Cortez will present a new commission selected for inclusion by a jury chaired by Brooke Kamin Rapaport (Deputy Director and Martin Friedman Chief Curator, Madison Square Park Conservancy), and guest judges Taylor Aldridge, Brett Littman, Loring Randolph, and Michaella Solar-March. Made of steel frame and sheet metal, Glacial Erratic evokes an ancient boulder, like the numerous glacial erratics that populate the landscape in New York City. Placed in the context of Rockefeller Center, the sculpture will age as it is exposed to the elements and human traffic while marking different temporalities and making visible the planetary nature of ancient migration.

Andy Goldsworthy (Galerie Lelong & Co.): Red Flags (2020) is a major new installation looking at the contexts of flags – their inherent and potential meanings – in one of New York’s most iconic flag flying sites. Goldsworthy replaces Rockefeller Center’s flags with flags colored with earth gathered from each of the 50 states.

Lena Henke (Bortolami): Two new sculptures, R.M.M. (Power Broker Purple) (2020) and R.M.M. (Organ, Organ, Organ Red) (2020) combine Henke’s personal experience and the history of New York City’s urban planning, in particular the controversial designs of architect Robert Moses (1888-1961). The sheer size of these new works was based on Henke's own height, and determined with the help of Le Corbusier's, Modular, and anthropometric scale of proportions, placing her own body in direct relation to Rockefeller Center's canonical architectural space. In their new context, set in front of the main entrance at Rockefeller Center's formal Art Deco-Influenced complex, the large, colorful hooves become objects of irrational, organic flux. They are an ode to the many equestrian symbols in and outside of Rockefeller Center's buildings, the horse motifs In Carl Milles' three-part work Man and Nature (1937-41); Attilio Piccirilli's glass block panel Youth Leading Industry (1936), installed over the Fifth Avenue entrance at the International Building North; and Robert Garrison's fantastical stone bas-relief, Morning, Present, Evening (1932) including the head of the mythological horse at the 1270 entrance.

Camille Henrot (Metro Pictures): Inside Job is a bronze sculpture to be installed in Rockefeller Center’s Channel Gardens. Evoking both the shape of a shark and also the beak of a bird, the work explores concurrent themes of threat and tenderness. Henrot will also present a series of small-scale works from Is it possible to be a revolutionary and like flowers? taking inspiration from previous collaborations with artists undertaken at the Sōgetsu School. The title of each piece is taken from a book, creating a library of literature translated into flowers.

Thaddeus Mosley (Karma): Three monumental freestanding sculptural editions, all specifically fabricated for Frieze Sculpture, entitled Illusory Progression, True to Myth, and Rhizogenic Rhythms have been sited on 5th Avenue in front of the Channel Gardens. These bronze works are the first multiple cast works in Mosley’s 60-year career and are based on his unique sculptures with salvaged Pittsburgh timber and discarded wood fragments and demonstrates what he describes as ‘weight in space.’

Listen to Brett Littman's audio guide and explore the map for the 2020 edition of Frieze Sculpture at Rockefeller Center, open now through October 2 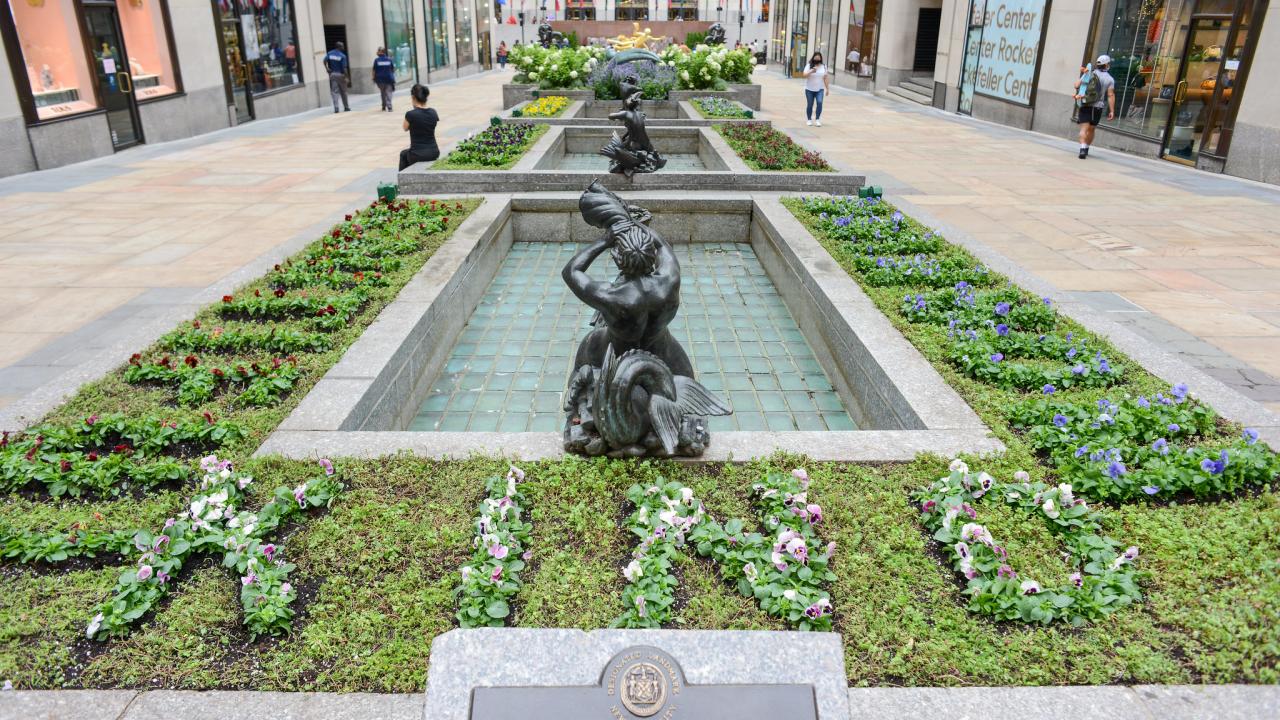 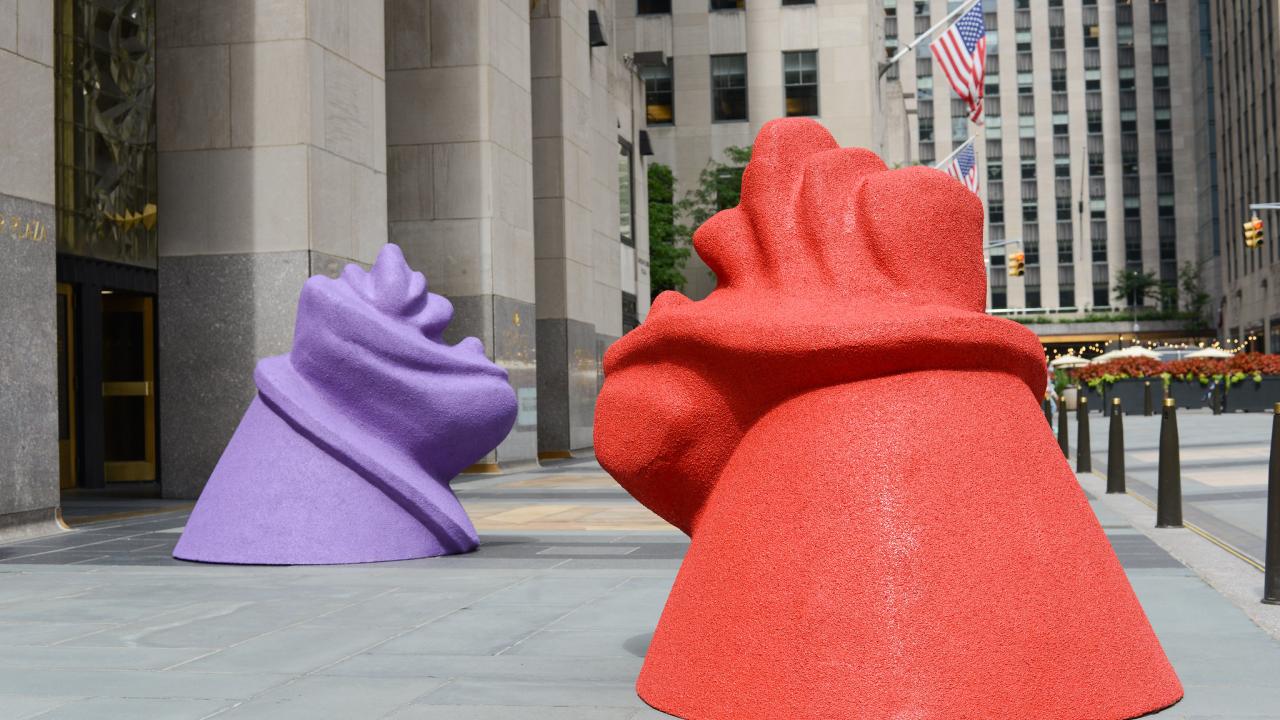 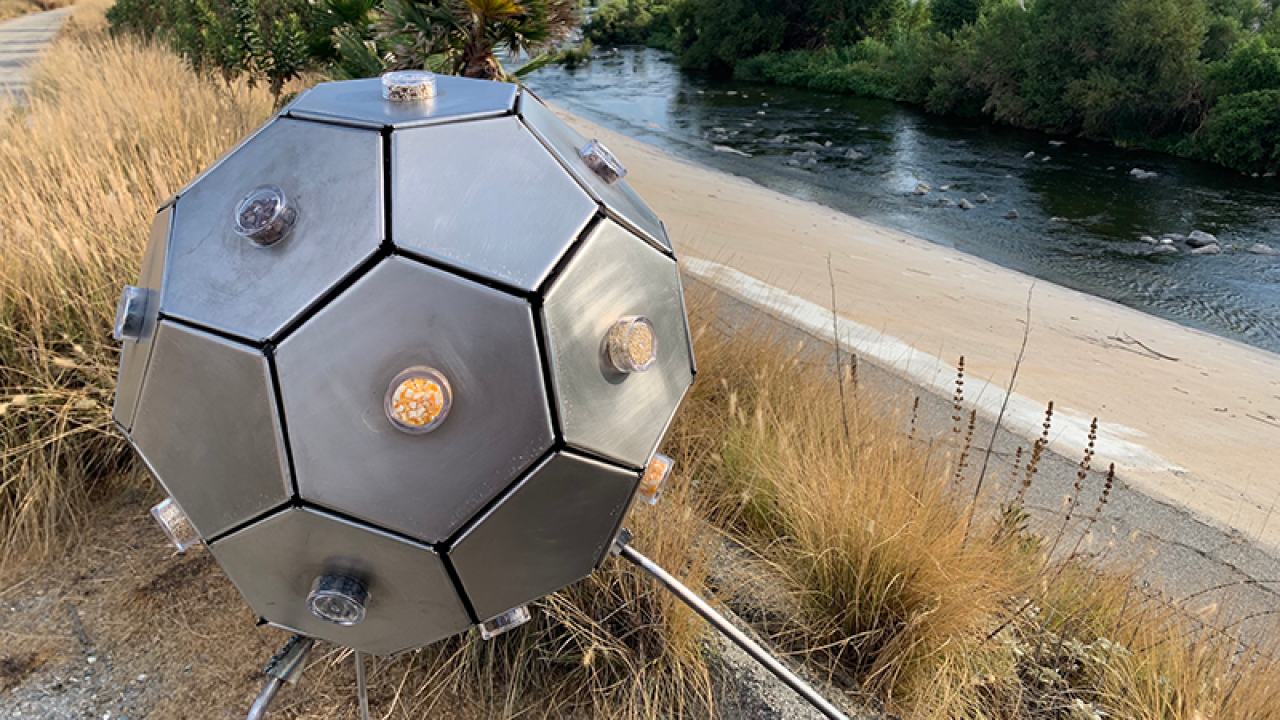 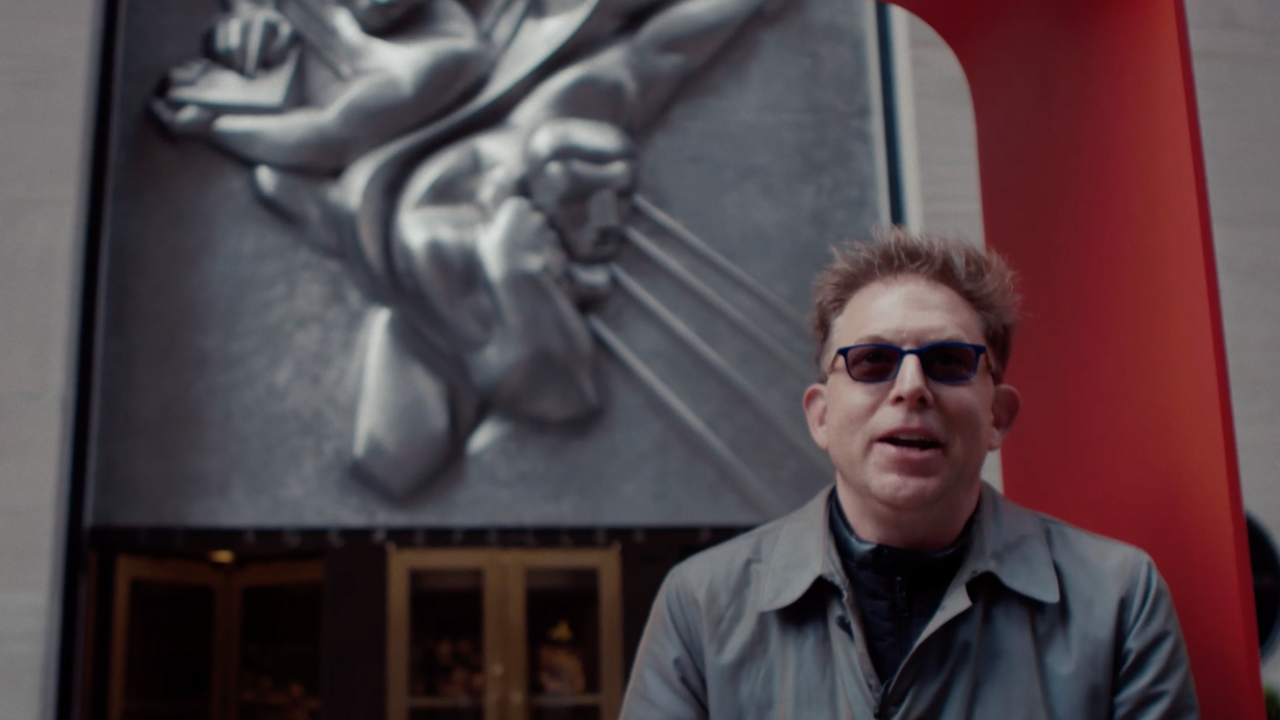 Article
‘How Do We Make People Stop and Look?’: Frieze Sculpture in New York City

Listen to Brett Littman's audio guide and explore the map for the 2020 edition of Frieze Sculpture at Rockefeller Center, open now through October 2