A fantasy-league team of architects, columns, cupolas and a coffee bar 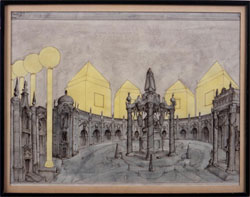 Pablo Bronstein has said that ‘I think you have to be a sick bastard to make architecture’. For him architecture is the strand of cultural production in which the normally veiled mechanics of economic and political power, vanity, indulgence, aspiration, pretence, conservatism and folly are left flagrantly bristling on the surface. However, the care with which he renders his homages to the work of his favourite architects reveals a sincere admiration and affection for his subject and suggests that perhaps for him criticality is not synonymous with contemptuous distance.

His drawings, models and installations frequently borrow the techniques of the architect’s trade, whether in sketched elevations or sections of buildings, or in interventionist installations that push and pull at the function of an existing space, manipulating the way in which pedestrian traffic moves through it. Bronstein’s Concept for a Public Square (2005) at London’s ICA comprised a low wall demarcating an area of dead space that visitors to the gallery were awkwardly forced to skirt around; a parody of the bully-boy tactics of authoritarian architecture, stretched to an absurd and dysfunctional degree. The wall, being knee-high, could of course be easily stepped over, but gallery manners and deference to the sovereignty of the art object prevented the public from breaching the redundant space that it so jealously guarded. I was reminded of the ‘because I said so’ tone of university rules forcing students to take circuitous routes around lawns in college quadrangles, and the reverence that those buildings are designed to inspire in their subjects.

Through his drawings Bronstein does not describe the use of space so much as loyally rehearse the stylistic tropes of his own fantasy-league team of architects. Drawn largely from the 18th century and the 1980s, this selection includes such prominent figures of the enlightenment as Filippo Juvarra and the Bibiena family, esoteric visionaries such as Jean-Jacques Lequeu and now outmoded Postmodernists such as Michael Graves and Léon Krier. A certain logic prevails in the conjunction of these two eras; after all, it was during the 18th century that aesthetic revivalism was first developed, a form that shares much with the pluralism that evolved in the 1980s. He also admits that the seeds of his own fascination with that century were sown when, as a boy growing up during the 1980s in Neasden, north London, he would spend weekends captivated by the Laura Ashley curtain tassels in ‘monster-hut’ DIY superstores.

Bronstein sees aesthetic history simply as a flattened plane on which a series of ideological and stylistic options offer themselves to be taken and put to use in the present at the whim of the creator. In recent works such as Idealized Perspective in the Style of Juvarra and Michael Graves (2006) he piles one layer of cultural history on another: pastiched Gravesian Postmodern edifices loom over the dripping finery of a Baroque plaza, a startling imposition that recalls I.M Pei’s Louvre pyramid in Paris. This stylistic even-handedness is also evident when Bronstein provides two or more ‘alternatives’ within a single drawing; each adopted vocabulary of columns, cupolas, pediments and pilasters is apparently endlessly interchangeable and reproducible within the conventions of its own language.

Many of Bronstein’s drawings mischievously describe themselves as ‘stage designs’, but this is accurate only inasmuch as any building creates a theatre for the performance of those who inhabit it. This categorization does, however, lead us towards an understanding of the inherent levels of vanity in the buildings that he describes, drawing attention not only to themselves but also to the absent figures whose thoughtful pauses in front of a monument are perfectly framed by an ornamented archway, or whose descent down a staircase is sycophantically heralded by sweeping balustrades. This critique is all the more acerbic when applied to the art gallery, traditionally a place to be seen as much as to see. In his 2006 installation at Tate Britain, Triennial Plaza in collaboration with architect Celine Condorelli Bronstein illustrated how, in his opinion, the cavernous hall of Sidney Smith’s Duveen Gallery (1897) has become unworkable for the contemporary public. His response was to reactivate it with a coffee bar and information displays on three screens, painted to approximate the colour of the gallery’s stone walls but mimicking the geometric forms of James Stirling’s 1987 Clore Gallery extension. A large green cross within a rectangle marked the area on the floor designated (in architectural shorthand) a ‘void’ – a dead zone outside which the other elements of the installation are arranged. This work also provides an arena for a performance, in which a group of Baroque dancers will dance in minuet step along the green outline of the void – in a further parodic illustration of the mannered use of institutional space.

In his attention to appearance and façade Bronstein is, in fact, concerned with an examination of their supporting structures. In his self-published series of reprinted Gothic novels by authors such as Horace Walpole the elaborate jackets that he has designed neatly articulate the conservative process of reconstructing texts taken from the Internet in a faux antique aesthetic. Walpole, himself a man concerned with applying historical veneers to contemporary feelings, would surely have approved of Bronstein’s efforts to reanimate history.