The cries of birds circling high above the city of Harar are the first sounds you hear as you enter ‘Evidence’ at Centre Pompidou. By the time you have toured the gallery space, this birdsong is punctuated by the metal screech of a closing gate in Charleville-Mézières train station, intoning the poet Arthur Rimbaud’s return to France in 1891 after a decade in Ethiopia.

‘In this exhibition, we are trying to understand what it means to record the traces of a dead poet,’ Stephan Crasneanscki, the multidisciplinary artist who founded Soundwalk Collective in 2000, tells me. In collaboration with poet and songwriter Patti Smith, Soundwalk Collective released Perfect Vision (2019–21), an album trio that incorporates Smith’s interpretations of texts by the French poets Antonin Artaud, René Daumal and Rimbaud.

The album, elements of which feature throughout ‘Evidence’, consists of field recordings that stretch from the poets’ times to ours: Sufi devotional chants from the Abyssinian Valley harken back to Rimbaud’s journey to Ethiopia in 1880; there are drum rolls from the Sierra Tarahumara in Mexico where Artaud communed with shamans in 1936; and Daumal’s lifelong fascination with Hindu philosophy and Sanskrit is invoked by the wailing winds of Nanda Devi in India.

‘For everything around you to become present when you are recording, you have to make yourself invisible,’ Crasneanscki says. When no one is there, life unfolds in the most sacred way. Often, sound is in service of the image.’

But not here. A soundtrack playing on headphones dictates bodily position and perception of scale, suggesting forms that you cannot see. Smith’s aural and rhythmic excavations of text permeate the vividly textured exhibition, which includes a visual palimpsest of Soundwalk Collective’s travels – the ‘evidence' display wall – a patchwork of paintings, photography, poetry and gathered ephemera: a video still from Nanda Devi (2015), drawings of India’s vertiginous landscape by Crasneanscki. On another wall is a series of Mexican ‘Red Earth’ (2022) paintings by Smith. Shards of glass from Rimbaud’s house in Harar, leaves from the cave in which Artaud partook in peyote ceremonies and slabs of slate from the Himalayas – an ode to the climb Daumal couldn’t make because of tuberculosis – bear a talismanic quality, a fragmented sense of place.

In the headphones, sound expands and contracts like ice. When you sit, it freezes into the crystalline tracks that form Perfect Vision and, as you move around, triggering the 150 sensors installed in the space, it dissolves into 6,000 separate recordings, bathing you in an ocean of resonance. By enabling each visitor to explore a fragment of the soundscape, Soundwalk Collective interrogates the extent to which we can embody another’s journey. What is present in the places these poets inhabited? What is inaudible or lost?

‘All three poets had such expansive minds,’ Smith tells me. ‘They were mental as well as physical travellers. And I’m a mental traveller, too.’ Alternating between spoken word and song, she evokes the altered states of Artaud, who, addicted to opiates, died in a psychiatric ward in Ivry-sur-Seine. His diatribe against the mental asylum, which Smith articulates in the track ‘Alienation and Black Magic’ (2019), remains cogent today: ‘What guarantee do the obvious madmen of the world have of being nursed by the authentically living?’

Thinking about what drives an artist to attest to the life of another, I return to the title of the exhibition, ‘Evidence’, which was conceived in the French sense of the word. ‘It means revelation or apparition,’ Crasneanscki explains. ‘Evidence is when you layer two things, an image and a sound, for example, and there’s a moment of epiphany, a moment of truth.’

Soundwalk Collective’s trance-like refrains of living landscapes transported me to a time before language. What comes through in this exhibition is the exchange and transmutation of creative forms between artists. The tangible and sonic souvenirs Crasneanscki brought back from his travels become a conduit for Smith’s vocal responses to the mental vistas of three writers, unleashing the memory of places she has never ventured to.

Near the exhibition’s ‘evidence’ wall, you’ll hear Smith riffing in free form: ‘The evidence bag is empty […] and it spreads across the great wall with force and quietude. Wind and sand, we are drawn into the ghost of the desert, it draws before us, active and still. Breath of breath, thought of thought, hearing of hearing. Those who know it have discerned the world, ancient and original.’

Patti Smith and Soundwalk Collective's ‘Evidence’ is on view at Centre Pompidou, Paris, until 6 March 2023 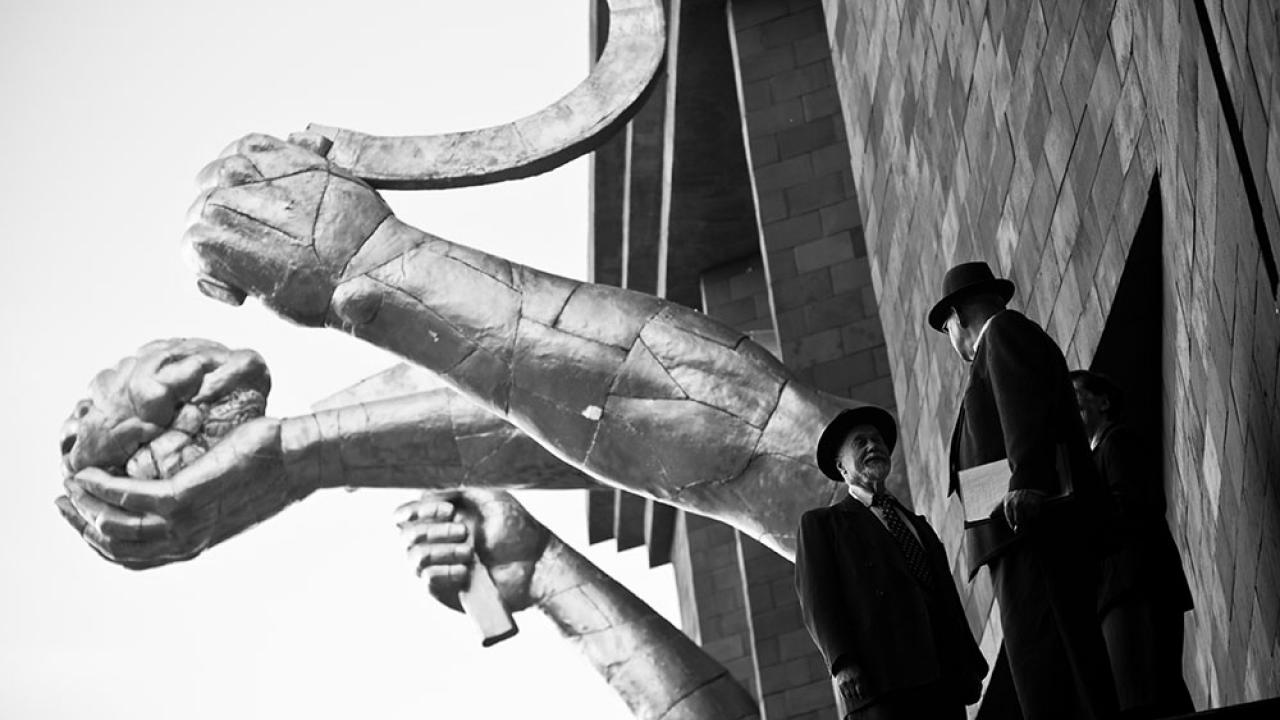