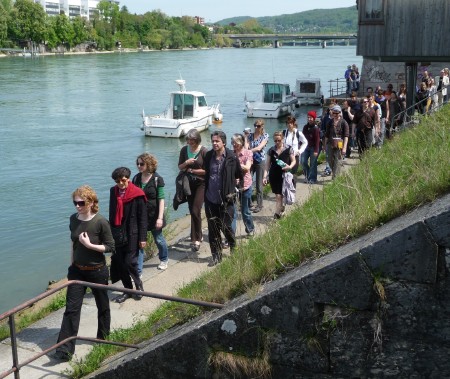 The impact of aging on visual artists is usually assessed through their body of work. But what if the aging body is the work? And what if that aging body is female, an inevitable reality that much of society continues to see as a horrific anachronism? (Enter Botox, boob jobs and bodies like Madonna’s, strung tight as drums.) Born from such questions, the week-long ‘Performance Saga’ festival in Basel mixed up-to-the-minute video interviews with’60s and ’70s performance greats like VALIE EXPORT, Joan Jonas, Alison Knowles and Carolee Schneemann in bars, museums and shop windows across the city. The week’s events culminated in a day of public performances by the olde (Esther Ferrer) and the neue (Lena Eriksson). As might be expected, however, the festival did not deliver answers so much as occasion a moment for asking more questions. But we can’t have it all, right?

Founded seven years ago by Basel-based artist Andrea Saemann and German art historian Katin Grögel, ‘Performance Saga’ comprises a video archive though also commissions new works. As a performance artist getting older herself, Saemann became interested in the idea of aging within a performative practice. Which itself begged the question: why are so many female performance pioneers seen as encased in the past? Commenting on pioneers such as EXPORT and Schneemann, Saemann commented, ‘You’re often stuck in the ’70s when you see or consider their work.’ Who can deny that it is their 30-year-old selves that we repeatedly conjure? Indeed, part of the power of those images of EXPORT stretched out along some Cold War plaza or Schneemann naked and mud-splattered, extracting a scroll from her vagina, is the attractive female youthfulness of the artists themselves: they look like rock stars, goddesses, models — like a weird marriage of October and Vogue, as terrible as that sounds. The videos interviews shown as part of ‘Performance Saga’ are meant to challenge this mentality. ‘It’s an infiltration of these images of older women throughout the city. Usually you think of these historical figures as young women but what does it mean to see them as they are now?’ asked Saemann. In anticipation of the Basel leg of the project (which was preceded by two in Bern and Lausanne), Saemann noted, smiling, ‘Sometimes the older artists become these Beckett-like figures, inserting their aging bodies into these young performances.’

Samuel Beckett certainly seemed alive in the first performance of the day, orchestrated by Esther Ferrer, the pioneering Basque-born, Paris-based artist celebrated for her work with prime numbers and her early performances with Spanish conceptual group Zaj. Ferrer’s three-hour ambulatory performance, TA TE TI TO TU ou l’agriculture médiévale (2009), constituted a walk – through the city’s botanical gardens, market place, cathedral, the perfumed environs of a department store and in boats down the Rhine – with a group of women and a few men who were instructed to chant ‘TA TE TI TO TU’ as they moved. (Radio X, a local station, came along to broadcast it live.) Traipsing around town, this mantra-like chant on everyone’s lips, was as one might expect: variously lulling, funny, embarrassing, boring and meditative. Sometimes the voices were inaudible, as on the chic Spalenbergstrasse, but as Ferrer led the group into narrower confines the gathered voices would swell and boom before growing hush again.

In the botanical gardens, moments of hilarity occurred: a woman from the radio station stuck her microphone in the face of a cerulean-hued tropical bird, which declined to speak. Then our group fell in with a group of teenagers, all sucking popsicles. Our voices were lost in the busy Marktplatz, but as we passed under a huge billboard of a half-naked model declaiming ‘We Make Basel Totally Sexy’, our voices inexplicably rose again. Close to the end, a final feeling of exhilaration – nurtured by exhaustion as much as commonality of purpose – seemed to come over the group. Ferrer has said, ‘To the kind of people who need to be nourished or entertained, what I do may seem boring.’ And the piece did feel somewhat static. The public who we might have shocked (before performance art become genially mainstream), were only amused or bored – as far as I could see. But the absurd has always been at the root of Ferrer’s practice, and it was this element – more than any other – that TA TE TI TO TU successfully explored.

After a lunch of soup (‘Always soup with these women!’, a young male artist commented to me over a beer a few days later), the next performance took place. This was also a walk in public, but one made ostensibly alone (and for only 15 minutes), with a trailing audience that quietly mixed with the Basel crowds. For Contrail (2006), Hina Strüver, a young Zurich artist, dressed up in a strange silver-ish bodysuit with a long ribbon train, and walked through a busy shopping area and along the river promenade, before finishing in a small apartment courtyard. If EXPORT walking a man like a dog through Vienna in the ’70s was a quickly understood political statement, Strüver’s aim was more inscrutable. She got stares aplenty, but these were likely occasioned by her costume, which evoked an aquatic sci-fi wedding dress. A guy suggested that the work might be vaguely political – ‘Her boyfriend’s involved with Greenpeace’ – but it mostly just seemed vague.

Lena Eriksson and Varsha Nair, LOOC: Line Out of Control

After a few hours’ break, the next performance commenced across town in the central train station. In a high-ceilinged waiting room on the French side of the station, two artists, Lena Eriksson from Basel and Varsha Nair from Bangkok, were quietly drawing. Sitting at opposite ends of a long bench, a scroll of yellow paper rolled out between them, the artists sketched the room with pencils that were also connected by a long length of string. The connection to performative work by artists such as Ann Hamilton – who similarly engages writing, repetitive work and a kind of architectonic sensitivity to unbroken horizontal lines – was immediately evident, but the piece didn’t feel derivative. It was helped along by a lovely instrumental soundtrack, which echoed through the space and oddly recalled the theme, and now an inescapable ring tone, from the TV show Six Feet Under. The music was sweetly uplifting, granting the new piece – LOOC: Line Out of Control – some levity.

If the festival had ended on LOOC, I might have gone away with a feeling that feminist performance art – while still indebted to the performative triumphs of the ’60s and ’70s – was currently being practiced in original and successful ways. Nevertheless, there was one more work – the only piece performed by a man, Lausanne-based Gaspard Buma, and the only performed within the walls of a gallery. Called body/mind (2009), it featured the artist naked in a box in a sealed-off room. A live feed of the performance was projected onto the wall of the gallery where we stood and sat. At two-minute intervals, audience members could enter the room and touch his body. Unlike the male-on-female violence inflicted on Yoko Ono in her seminal Cut Piece (1965), the touching here veered closer to backrubs and tickling, all to much laughter from the affectionate audience. The triteness of the performance retrieved a long buried memory of mine from college. As an undergraduate studying sculpture, I decided I wanted to do a performance unclothed. When I told my professor, she smiled at me generously and suggested I re-think the work, saying something to the effect of: ‘It’s been done before.’ Before I fled the giggling in the gallery, I wanted to gingerly offer the same words. Instead, I recited a calming rendition of ‘TA TE TI TO TU’, and got on with my night.