The Physiognomy of a Nation

Italy at the 54th Venice Biennale 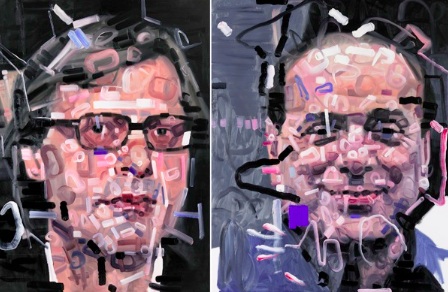 ‘Viva l’Italia, viva l’arte, a morte i critici’ (Long live Italy, long live art and death to all critics), was the refrain with which arts writer, curator, Mayor of Salemi and former parliamentary minister Vittorio Sgarbi sought to evince enthusiasm and silence dissenters during the press conference for the exhibition he has curated for the Italian Pavilion at the 54th Venice Biennale, ‘L’Arte non è Cosa Nostra’ (Art is not the Mafia). Regardless of what his critics say, art is the measure to which Sgarbi’s cynical, politically calculated and aesthetically poor display must answer and history will judge it harshly for the intrusion of Berlusconian politics into the otherwise politically autonomous contemporary cultural field.

Pino Bertelli, Nostra bambina della guerre! Avete fatto uno deserto di morte e l’avete chiamato pace! (Our baby of war! You have made a desert of death and you have called it peace!, 2003)

In Emile Zola’s novel L’oeuvre (The Masterpiece, 1886) there is a scene in which the hapless painter Claude Lantier – a thinly veiled depiction of Zola’s friend, Paul Cézanne – seeks out his work amongst the hundreds displayed in the ‘Salon des Refusès’ of 1863. ‘Before certain pictures the public stood joking. This made him feel uneasy, for despite all his revolutionary brutality he was as sensitive and as credulous as a woman, and always looked forward to martyrdom, though he was ever grieved and stupefied at being repulsed and railed at.’ This could well be a description of the Italian Pavilion: paintings are piled high and arranged in often inexplicable juxtapositions, suggesting either a lack of consideration or tasteless provocation on the part of the curator. For example, Pino Bertelli’s image of a war-wounded baby, Nostra bambina della guerre! Avete fatto uno deserto di morte e l’avete chiamato pace! (Our baby of war! You have made a desert of death and you have called it peace!, 2003) is displayed next to Marco Grassi’s Thirteen; Brother and Sister (2011), a brightly painted diptych featuring two healthy teenagers posing in dark shades.

Marco Grassi, Thirteen; Brother and Sister (2011), one part of a diptych

Yet the apex of curatorial lunacy on show is manifested in the constellation of Wainer Vaccari’s painted portraits of Sgarbi and Silvio Berlusconi grinning wryly Untitled 56 and 57 (2010) with Giovanni Dice’s Humanita (2010–11) – a painting depicting refugees from North Africa gathered at an unnamed Mediterranean location (perhaps Lampedusa) – and Donato Pizzi’s photograph Il Fine Del Mondo (The end of the world, 2011), an appropriation of Gustave Courbet’s L’Origine du Monde (The Origin of the World, 1866). Depictions of smirking public figures and the despair of people trapped in abject poverty fleeing Africa for a better life, capped off with a reminder of the political stakes in Italy in the weeks surrounding the Biennale opening, Il Fine del Mondo signals perhaps the end of Berlusconi as Italian premier. It’s a joke which, according to one eyewitness of the preparations for the show, was not lost on Sgarbi, former minister in the Italian premier’s administration.

That there is some occasional good work on display amongst the dross is more the pity for the artists involved; only those who boycotted the event, such as Maurizio Cattelan and Rosella Biscotti, could possibly take wholehearted satisfaction in the critical reception of the show. I imagine though that both artists are appalled that the pavilion has been used as a political pawn.

The history surrounding Sgarbi’s appointment as curator of the Italian Pavilion is instructive; it provides a backdrop for a show that, whilst being aesthetically questionable, conveys a message greater than the sum of its parts. Sgarbi was selected by the Italian Cultural Minister Sandro Bondi an unprecedented one and a half years before the opening of the Biennale – indeed, before the dates for the Biennale had even been decided – as a means of opening it up to the cultural leanings of the administration which are, predictably, conservative: figuration over abstraction, literalism over enigmaticism and classicism over contemporaneity. In short, Sgarbi – routinely mocked or even ignored by the contemporary art community – was air-dropped into the Biennale to spearhead a populist revolt, just as Berlusconi had done for politics in the 1990s.

The result is a salon-style show spanning three large rooms, coinciding with the 150th anniversary of Italian unification; it includes over 200 artists, each picked by a different Italian scholar, with more than 1,000 other artists showing across the regions of Italy and in the 89 Italian Cultural Institutes across the world. Such a de-centreing of Italy’s Biennale contribution, both geographically and as a circumvention of the Italian contemporary art network, aims to challenge the status quo of the contemporary art scene. However, this would have been a distinctly more laudable effort if a ruling administration insider hadn’t undertaken it. For in reality, far from being a simple challenge to the cultural elite, Sgarbi’s effort stands historically alongside various other cringe-worthy episodes in which the powerful have sought to port their ideological campaign to the cultural sphere, both in order to gain credibility and to tame the recalcitrant vein that runs throughout the arts. From Tony Blair’s befriending of Britpop and yBa celebrities in the 1990s, to the more sinister simultaneous exhibition of ‘degenerate’ and ‘folk’ art by Adolf Hitler in the 1930s, it is the opacity of works of art – which in their ambiguity and subtlety evade censure – that confounds the common-or-garden oligarch or dictator. Sgarbi’s portrayal of the contemporary art network as closed, elitist and detached sees Berlusconi’s administration – which thrives on media control – desperately attempting to co-opt a last bastion of freedom.

On the other hand, Sgarbi’s professed desire to put an end to cultural elitism might appear reasonable if it were possible to put aside the incriminating circumstances of his appointment as curator and assume for a moment an objective critical stance. For after all, the art scene in Italy – as with all fields of business – is relatively closed, whilst the Biennale network often plays host to the same revolving tableau of artists, year in, year out: these were the principle complaints that Sgarbi levelled at the art world both in the press release and press conference of the show. This year’s Biennale, ‘ILLUMInations’, arguably offers little that could lead one to dismiss these criticisms, even if Sgarbi is the wrong person to make them.

Indeed, if it is possible to talk of ‘illumination’ in the political sense intended – the illumination of nations – it is for the inclusion of newcomers such as Bangladesh, Iraq, Saudi Arabia and Zimbabwe, and the Pan-Arab pavilion. And if the social plea for recognition which characterizes a first time national exhibition serves to upset the allegedly hermetically-sealed contemporary art circuit, ‘L’Arte Non è Cosa Nostra’ presents a clumsy intrusion of genuinely pressing social concerns into that same ‘closed’ world, only not in the way the curator intended. For the show appears to have resulted unwittingly from the congruence of a cultural elite who lack political power and a political elite who lack culture, highlighting the negative aspects of both – although ultimately it is the clumsy Berlusconian presence which comes off worse here.

In Italy, a country with a deep cultural heritage, the fine arts are the final refuge from a philistine tendency that affects everyday life with an alarming pervasiveness. Yet it appears that the systemic contradictions which plague the Italian political and cultural sphere – and which serve to keep the powerful grinning their stricken grins – have now invaded the fine arts. The title of the show, ‘L’Arte non è Cosa Nostra’, is a reference to a collaborative installation by Cesar Inzerillo, Elisabetta Rizzuto, Nicolas Ballario, a group of young people and Il Museo della Mafia di Salemi (The Mafia Museum of Salemi) founded by Sgarbi in Sicily. Yet in Italian, ‘cosa nostra’, as well as signifying the three powerful organized crime syndicates in Italy, literally translates as ‘our thing’, leading to two further possible interpretations: ‘art is not our thing’, in the sense that Sgarbi seeks to highlight – i.e. in that the Italian contemporary art scene is a closed world – or, on the contrary, art is no longer ‘our thing’ in that it has been co-opted by the political class.

Visitors will no doubt draw their own interpretations and should do so with urgency, for the main thing to take away from the Italian entry at the 54th Biennale is an awareness of the stakes. This year a self-serving philistine politics arrived very visibly at the centre of the most prominent cultural event in the art world’s calendar. The art world awaits an appropriate response.