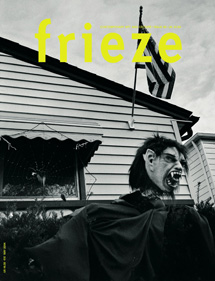 Picture Piece: Jacob and the Angel

It was the last weekend of Olafur Eliasson’s installation The Weather Project (2003) in the Turbine Hall of Tate Modern. A faint atmosphere of side-show frenzy filled the sugar-misted air. Hordes of people milled about, basking in the orange glow of this astonishingly popular artificial sun. In the relative calm of the Constantin Brancusi exhibition upstairs we wondered whether Jacob Epstein’s sculpture Jacob and the Angel (1940–1) was influenced by Brancusi’s Kiss (1916). In the bookshop a biography of Epstein fell open to a photograph of Louis Tussaud’s Waxworks, Blackpool, 1942. Beneath a hoarding advertising Tony’s Jugs of Tea, a billboard proclaims ‘Epstein’s latest sensation! Jacob and the Angel. Adults only. No Cameras. Admission 3d.’ Segue to an earlier, equally popular side-show.

Throughout his career Epstein’s often overtly sexual sculptures were subjected to vitriolic, frequently anti-Semitic attacks. Rock Drill (1913–14), the first British sculpture to include a mass-produced object, was vilified. Epstein’s 18 statues for the British Medical Association headquarters in the Strand were disfigured; in Paris his tomb of Oscar Wilde was censored, and Rima (1924), ‘a sanctuary for birds in Hyde Park’, was tarred and feathered.

By the 1930s canny showmen bought some Epstein sculptures and toured them for decades as a kind of freak show. Epstein was too broke to protest. Eventually four of them, including Jacob and the Angel, were displayed in the ‘anatomical department’ of Blackpool’s Tussaud’s. A loudspeaker booming across the sands invited revellers to visit ‘the strangest thing you have ever seen’. Up to 17,000 people a day came to stare.

Fifty-six years after its creation Jacob and the Angel was bought by the Tate. Last year Mark Leckey confronted the sculpture with a similarly scaled sound system for his performance Big Box Statue Action (2003). Songs played included ‘Persuasion’ by Throbbing Gristle and ‘Our Prayer’ by the Beach Boys. A Google search for Epstein returns the website for the band British Sea Power, who declare ‘we are passing through times when the mediocre and malfeasantare widely celebrated. This situation cannot last. Remember the superb sculptor Jacob Epstein was once attacked and harangued by the National Vigilance Society.’

In the Book of Genesis in the Old Testament Jacob wrestles with an unknown aggressor throughout the night. In the morning the brute is revealed as an angel and blesses Jacob because he has not ceased to struggle. In Epstein’s mottled alabaster carving, nocturnal discord dissolves into an intense, even carnal embrace. The angel’s wings support the figures like a wall; his limbs are as sturdy as pylons. Jacob’s eyes are closed; his exhausted head is thrown back, his arms are limp. Jacob Epstein, the most worldly of sculptors, is transformed into the idea of Jacob – a battered creature sprung from the rough-hewn material of the physical world yet supported by an apparition.

I visited Jacob and the Angel last weekend at Tate Britain; the couple are currently entwined in their eternal embrace at the top of a quiet staircase. For the moment, all is calm.