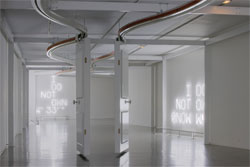 Pierre Huyghe’s ‘Celebration Park’ inaugurated the reopening of ARC/Musée d’Art Moderne de la Ville de Paris, which had been closed for over two years for renovation. If Huyghe’s solo show is any indication, access to the spruced-up East Wing of the Palais de Tokyo (originally built for the 1937 ‘International Exposition of Art and Technology in Modern Life’) and to ARC’s distinctive curved space on the top floor is indeed cause for celebration.
Huyghe has been experimenting with exhibition formats and temporal frameworks since 1995, when his contribution to ‘Moral Maze’ at Le Consortium in Dijon grouped the participating artists into the Association of Freed Time. The notion of freed time has enabled him to envisage projects as the ‘production of scenarios’ and exhibitions as starting-points rather than goals. In this exhibition Huyghe teased the spectator with a ‘prologue’ to his own show, tantalizingly hinting at the larger exhibition to come. For several weeks prior to the ‘official’ opening one could see a number of elements that would shortly be rearranged, recast or further fleshed out. In a glass-walled room at the top of the stairs a stacked block of 1,000 golden diaries (Untitled, 2006) occupied the centre of the floor. One copy, sequencing the expanded time of the exhibition (which will travel to Tate Modern) in hours, minutes and seconds rather than days, was available for perusal. Were the remaining blank books testaments to empty time?

Further along, a pair of massive white doors with polished silver knobs (Gates, 2006) stood like book-ends at either end of the curved gallery. They instantly conjured up Lewis Carroll’s Alice’s Adventures in Wonderland (1865), as they automatically opened onto a radiant white space punctuated by a series of white neon signs (Disclaimers, 2006). The first of these was placed before the doors and read ‘Je ne possède pas le Musée d’Art Moderne ni l’étoile noire’ (‘I do not own the Musée d’Art Moderne or the Death Star’). Others spelled out such phrases as ‘I do not own Snow White’ or ‘I do not own 4’ 33”’. By promptly repudiating his claim to the space and denying his ownership of artistic or Pop-cultural elements that have influenced previous works (Blanche Neige Lucie (Snow White Lucie), Death Star Interior or Silence Score, all 1997), Huyghe paradoxically evoked his, and their, presence: a clever way of simultaneously asserting and challenging the principles of a retrospective. The far side of the gallery was a dead-end: the exit doors fluttered ajar, allowing a glimpse of a marionette of the artist slumped on the floor.

When I returned a month later, I expected a festive and folkloric treat along the lines of Huyghe’s film Streamside Day (2003), which records an annual festival he instigated in a suburban New York housing development. But the exhibition had bloomed into something altogether more accessible and less austere, perhaps because things had started to move in time and in space, and narrative plots and threads began to emerge. One Year Celebration (2003–6), a set of posters announcing proposals for new celebrations or holidays contributed by Huyghe’s friends, now surrounded the squat block of gilded books. The once static Gates were now hung on curvilinear tracks and slow-danced their way back and forth through the gallery. Two films had also been added: This is Not a Time for Dreaming (2004) and A Journey that Wasn’t (2005). In the former the marionette turns up in a puppet show that compares Le Corbusier’s trials and travails while working on the Carpenter Center for the Visual Arts at Harvard University (1964) with Huyghe’s own experience making a commission for that space. The tension between the black praying-mantis/Darth Vader figure personifying Harvard and the seemingly hapless architect, artist and curators was rendered palpable by a dramatic score. The fact that the film was made, however, seemed to demonstrate that creativity wins out in the end.

Not long afterwards Huyghe escaped to Antarctica on a quest for an albino penguin living on an uncharted island (or did he?). A Journey that Wasn’t combines images from the polar voyage and a concert held at Wollman ice rink in New York’s Central Park, where an orchestra played a musical translation of the topography of the island (his team gathered data from a sound and light station designed to translate the topography into sound and then delivered those data to the composer Joshua Cody, who wrote the score) and an animatronic bird appeared out of the mists. The pale penguin turned up in Paris, where R&Sie(n) architects reconfigured the island out of delicately cut aluminium (Terra Incognita/Isla Ociosidad, 2006). A plaque indicates that Huyghe has officially proposed to name this discovered place ‘The Island of Idleness’. Walter Benjamin extolled the virtues of idleness because it leaves one open to immediate experience, and to chance. Huyghe has taken this to heart to make art out of not doing anything in particular – of not filling time.