What’s with the art world’s fascination with ‘bad boys’? 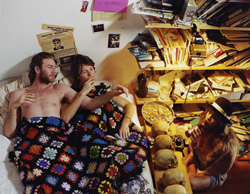 I recently watched The Devil Wears Prada (2006) on a flight from London to New York, a not-so-new film that got a lot of press attention because of Meryl Streep’s Oscar nomination for best actress. I had been curious about this movie since it tells the story of a mega-successful woman (it’s a thinly veiled portrait of US Vogue editor Anna Wintour) and her young female protégée in the cut-throat, high-glamour world of fashion. In our allegedly post-feminist culture I wanted to see how Hollywood would treat the proverbial phallic woman, whether it would allow her to revel in her hard-earned authority or crush her under her own emotional shortcomings – which, of course, is the typical outcome. (Full disclosure here: I once worked for Wintour while a fact-checker at New York magazine, hence my more than passing interest in the subject.) I wasn’t too surprised that the film reiterated every misogynist Hollywood trope. Not only did Streep’s character lose her husband, but the editorial assistant whom she nurtured from drab bookworm to savvy fashion associate jettisoned her new, high-profile position (and all her new clothes) to satisfy her earnest, pseudo-intellectual boyfriend. In the collective imagination of our popular culture why is it still impossible to envision a successful (well-dressed) woman being emotionally and sexually fulfilled?

It will be interesting to observe how this skewed equation plays itself out during the coming year in the real-life theatre of American politics, with the first female Speaker of the House, Nancy Pelosi, ensconced in Washington. Pelosi has already been derided by the right-wing press as an Armani-wearing, over-emotional shrew, and now that Hillary Clinton has officially announced her bid for the presidency the gender stereotyping will know no bounds. It is entirely coincidental but not irrelevant that this is also the year that the art world is re-examining the history and legacy of feminism’s impact on visual culture in two revivalist exhibitions: ‘Wack! Art and the Feminist Revolution’ at the Museum of Contemporary Art in Los Angeles and ‘Global Feminisms’ at the Brooklyn Museum, which is timed to coincide with the inauguration of its Elizabeth A. Sackler Center for Feminist Art (home to Judy Chicago’s iconic Dinner Party of 1974–9). The former sets out to unpack the multiple perspectives – ranging from essentialist to Deconstructivist – that informed an explicitly self-conscious, and often protest-oriented, women’s art spanning the years from 1965 to 1980. And the latter, more contemporary, survey features an array of women artists who have been working with feminist issues since the 1990s. The all-female casts of these two worthy projects will certainly be a refreshing antidote to the largely male-dominated exhibitions we’re used to seeing at most major museums (mine included). But they also run the risk of alienating a younger generation of artists who have assimilated the concept that gender difference is largely performative and thus find suspect any kind of socially coercive role-playing. I call this the ‘Tamy Ben-Tor syndrome’, in honour of the artist’s irreverent performance at a New York Times-sponsored panel on the state of feminism last year, in the company of such warriors for the cause as Barbara Kruger and Joan Snyder. Refusing to admit its relevance to her work or life, Ben-Tor claimed that feminism was an ideology of victimization and that she preferred instead to consider the broader spectrum of the human condition from a very personal position. ‘The Holocaust is not just a struggle for Jews’, stated the Israeli artist, no doubt pushing all sorts of socio-religious buttons.

The younger women artists who distance themselves from feminism today – whether because they believe all the essential battles have been won and they are operating from a place of privilege or because they discount the defining impact of gender – should take a long hard look at the art world’s current fascination with stereotypically bad-boy behaviour. New York magazine (which admittedly loves hype) recently published a breathless paean to the antics of artist boy-wonders Dash Snow, Ryan McGinley and Dan Colen, who don’t seem to know or care that others before them have ejaculated as an art form. From the sycophantic vantage point of author Ariel Levy, these artists are obsessed with their penises and with each other in a narcissistic circle of partying, petty crime and occasional art-making. The fact that Snow is a descendant of the De Menil clan only adds to the sensationalism of the coverage. This is not to dismiss their individual practices, but rather to ask why their circle-jerk brand of art-making would strike such a chord with critics and collectors alike in our so-called enlightened, post-gender culture. Is it symptomatic of yet another conservative backlash against women who seek a more balanced status quo? Or just cultural amnesia? This might be a good question for Levy herself. She is the author of Female Chauvinist Pigs: Women and the Rise of Raunch Culture (2005), in which she slams this generation of young women for equating ribald displays of sexuality – from wet T-shirt contests and lap-dancing classes to stripteases for the webcam – with liberation and empowerment. Although her argument here is compelling, and even urgent, she forgot to question the age-old existence of a double standard.