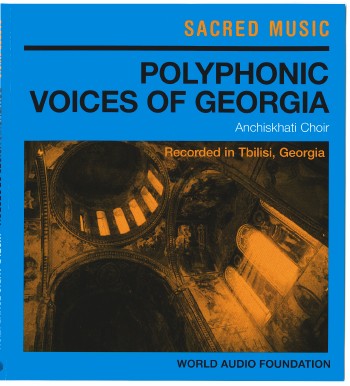 Founded by Soul Jazz Records, the World Audio Foundation imprint has the noteworthy ethnographic remit of recording overlooked and disappearing musical traditions. The first release was from Conga De Los Hoyas, an east Cuban carnival group that has been active in one way or another since the early 20th century, and its excellent second outing makes an unexpected left-turn from Afro-Cuban rhythms to the sacred choral music of Georgia. Although incorporated into liturgical services in the early Middle Ages, this pre-Christian tradition actually dates from the 7th century ad – some 300 years before polyphonic singing began to be developed anywhere else in Europe. Indeed, the late American musicologist Alan Lomax, himself a tireless compiler of field recordings, has referred to Georgia – wedged between two continents and the Black Sea – as the world capital of folk music.

The polyphonic tradition was far from secure, however, after church singing was suppressed by the Soviet Union for three generations. Somewhat ironically, before banning religious music, the Georgian-born Stalin joined a seminary at which he sung in a choir. This release is extraordinary, in part, because it is a document of a 1,300-year-old tradition that would have been impossible to record for much of the 20th century. Following the dissolution of the Soviet Union at the end of the 1980s, the Anchiskhati Choir was formed with the aim of reviving what had almost been forgotten. Aside from recording, the nine members of the choir – which specializes in both religious and folk music from the region – are also musicologists, travelling to remote mountain monasteries in order to research and learn songs, many of which now only exist in manuscript form.

Recorded in the Georgian capital of Tblisi’s 6th-century ad Anchiskhati Church (where the choir regularly performs), the 16 short songs collected on Polyphonic Voices of Georgia comprise calls to worship and devotionals. The richness of these dense pieces – the history and literal meaning of which I can only guess at – is overwhelming and their complex structure (very different from the verses and choruses of Christian hymns) is difficult to describe. Simply put, the songs comprise three discrete melodies (chanted, sung and hummed) that cohere into a single modal harmonic structure, dense clusters of harmonies and occasional dissonance sometimes causing a kind of quivering effect. The choir’s staggeringly long phrases sound intensely technically difficult (the only flaw of this beautifully presented release, which comes with postcards and a poster, is a lack of detailed information; all that is said of the vocal demands is that performers use a ‘special technique’).

In 2001 UNESCO named Georgian polyphonic singing as one of 19 ‘Masterpieces of the Oral and Intangible Heritage of Humanity’. High praise indeed, but titles like this do little to actually preserve disappearing musical traditions. Congratulations, then, to World Audio Foundation for getting on with the presumably costly business of actual documentation – perhaps UNESCO should give them a call.