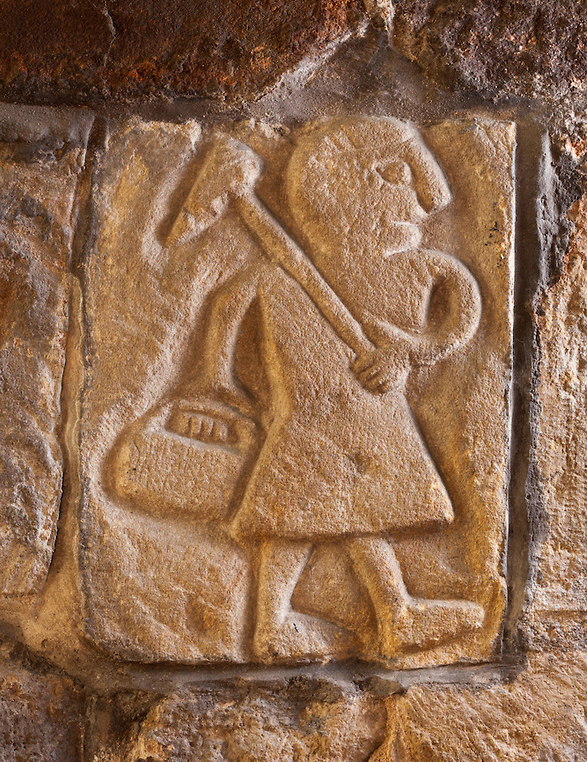 I came across this Saxon stone carving when asked to be part of the 2014 Wirksworth Festival in Derbyshire which was curated by Rose Lejeune. It is a stone relief of a lead miner, with his pick and kibble (metal bucket) at St Mary the Virgin church in the town. I was excited by folk art aesthetics in relation to ideas and approaches I wanted to make in performances. The work I did in Wirksworth was the initial stages of using clay in live performance and has led to my current research into a sculptural interpretation of Stravinsky’s 1913 ballet The Rite of Spring. I wanted to explore mediums that held or expressed primal qualities that had a kind of crude and direct play as clay does. This has developed into the film and ceramic works made through performances, which are currently exhibited in ‘RITE’ at Studio_Leigh in London. The figure is engaged in labour of some kind and is laden with representation. I was taken by the mark and rawness of its outline which led me into a narrative about the person who chiselled the figure and why it was set into a church; how religion and work must have been intertwined. I think of how unfathomable it is to think about that person and the realities of their lives more than 20 centuries ago. I start to think of basic things like were they cold when they made this? What would their relationship to temperature be? How the stone got set, passages of time, if I went back in time, how we could speak to each other? Maybe through pushing clay together or casting a mark into the wall. I presume it is a man, I imagine them as a woman. I find the figure endearing but that feels patronizing to that person, to that past culture. I am confused by my relationship to folk art aesthetics. 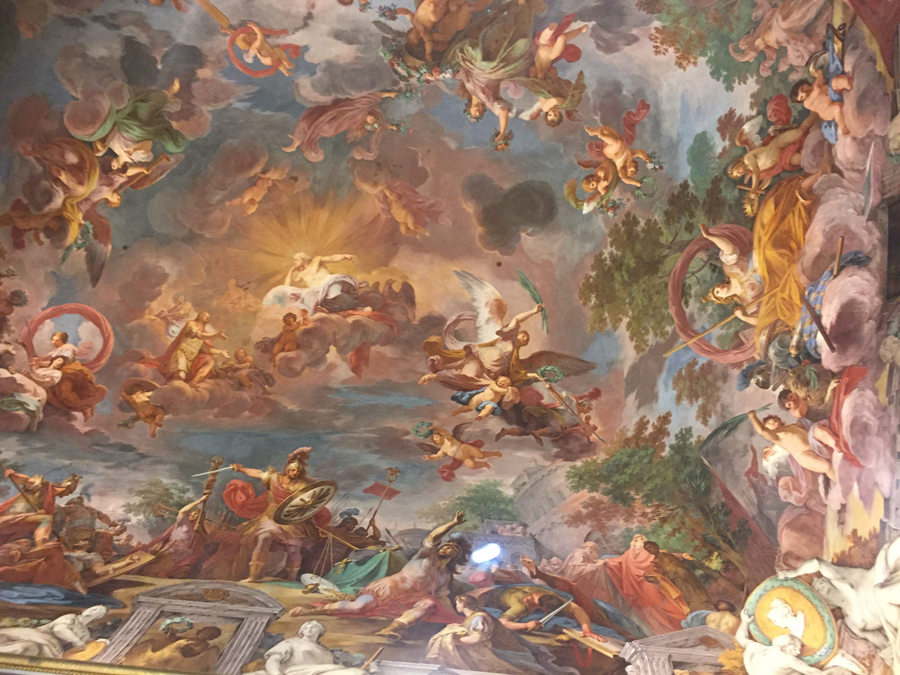 Ceiling Painting at Villa B

This image was a key reference for ‘Andromedan Sad Girl’, a two-person show in collaboration with Tai Shani currently on at Wysing Arts Centre in Cambridge. ‘Andromedan Sad Girl’ took the idea of an imagined archaeological site as a premise for the collaboration. For the wall painting I wanted to do for the show I was thinking about Renaissance painting – the formal composition in it and the elevation of a single subject. I saw this ceiling fresco at Villa Borghese in Rome. I liked the movement and choreographic elements in the painting. The sense of falling through space, sweeping clusters of scenes lifting and gesturing to things; there’s an absurdity to it and a theatricality archly illustrating its narrative. I was interested in how, in the central climactic moment, the god is framed by bodies with bulbous clouds and curvaceous fabric to lift, to fulfil a story. In ‘Andromedan Sad Girl’ I wanted to reverse this formal composition by bringing the climactic moment as a culminating mass of coalescing, conjoined bodies rather than something separated and singular.

This is an image from a book, Body Space Image (1990) by Miranda Tufnell and Chris Crickmay. It is a fantastic resource for somatic dance practitioners interested in improvisation. I used it to meditate upon ways to move with ideas – how to engage both with conceptual notions of our bodies and physical palpable experiences of moving. Looking at images of bones I always find it quite shocking that we have such hard material inside our bodies and that actually bones are soft and porous and filled with blood – only when we die do our bones harden. I find this very mysterious and intriguing. This image creates a kind of abstraction – seeing an internal system externalized and inventoried in this way. It reminds me of archaeological digs where skeletons are visible and abstracted from a recognizable fleshy form: the inside being invisible, then externalized.

I saw Dark Hours & Finer Moments (1994) after working for the first time with Gaby as a dancer in her work The Family in the early ’90s. This film, as with all her work in general, has for me a kind of hazy imagery and atmosphere that softens me around the edges. I feel encouraged by her work, the images give me access to connecting to a sensual, pleasurable touch; a fleshy perspective, a place where I feel the sheer enjoyment of my body. This moment in the film gives me a really visceral sense of the night air on the dancers skin. There is something childlike in this appropriation and styling of the clothing but done by four uncompromising womanly bodies. Or is it something I did when I was a teenager? The images she works with are familiar to me so hold a nostalgic quality, a fearless kind of romantic imagination. Something that says this is all and enough, here on this street, here with our jackets tied around our waists, arms in the air, skin exposed.

Jonathan has been a huge influence on my practice. I first collaborated with him in 2014, at the artist-run space Primary in Nottingham, on a piece where I activated his sculptures with my movement. The individual works are bold and bodily and I think of his installations as an environment, a sculptural landscape that also animates me. I found working with his sculptures deeply erotic and psychological in a kind of Jungian fuck-me-here-and-now sort of way. A kind of subconscious, get inside your dreams and lull me awake with visitations from dildoesque objects, whispering sirens love songs. I grapple with the interiority and an audacious slap of exteriority in colour, symbolic language and eerie pagan sexuality when touching and moving with Jonathan’s sculptures. I forget there are people watching. Seeing this photograph after performing this work I felt the internal experience, the kinaesthetic memory of touching and being with the centaur sculpture. When meeting this sculpture it was like falling perversely in love. In love with an object, in love with a mythological sex doll, a kinky centaur, it was a kind of fertility rite.

This image is part of a collection of digital collages by Eve Stainton that she has been putting together as part of a collaborative project we are researching. We are thinking about what is possible within the concept of performing intimacy. The nebulous blurring in our relationship between the private and the professional; what exposing more tender and erotic parts of our intimate relationship could be? We have called upon a ‘Slug entity’ to guide us in this. We conjure a slug entity in our imagination. We then give the slug entity an emotionally charged memory or situation from our relationship. The slug then performs a dance. We then perform a literal representation of whatever manifested through the slug. An intimate display removing the responsibility of agency over the intimacy, in attempt to be close to one another through performance. Like in this image, the ‘slug’ moves through our bodies.

Florence Peake’s solo show ‘RITE’ 2017, runs till 16 December at Studio_Leigh, London. She will be talking about the show with Martin Hargreaves at the gallery on 29 November from 7pm.

Florence Peake is a London-based artist. Recent performances, commissions and shows include at Somerset House, London (2015), the ICA, London (2015), Whitechapel Gallery, London (2016) and the Serpentine Gallery, London (2016). Her two-person show with Tai Shani runs at Wysing Arts Centre, Cambridge until 3 December and her current shows at Studio_Leigh, London, runs until 16 December, 2017. Peake is a recipient of the Jerwood Choreographic research fund 2016 and the CASS Projects Residency 2017 in partnership with West Dean College. The Rite of Spring project performance will be touring next year with its premier at the De La Warr Pavilion in Spring 2018.