Mona Hatoum’s 1998 show at the New Museum was full of domestic objects made unheimlich with spikes and barbs, and featured Measures of Distance (1988), one of the most efficiently complex and beautifully layered pieces of video art that I have ever seen. The exhibition captured so precisely the experience of exile: the way that ordinary things and spaces become entangled with painful memories, acquiring sharp edges and dangerous currents.

Eight years later, I saw her show at the ICA in London and was struck by Map (1999), a map of the world constructed entirely from clear glass marbles that were spread across the floor. The fragility of this construction, the way the marbles would shudder as people passed through the room, was a perfect illustration of the title chosen for Hatoum’s accompanying monograph: The Entire World as a Foreign Land.

I picked up this postcard of Red Stripe Kitchen at the International Center for Photography in New York during Martha Rosler's 2000 show ‘Positions in the Life World’. Some time later, I dug it out of the file where I keep cards from shows and tacked it up on my studio wall. In the intervening years, the idea of ‘bringing the war home’ had become quite important to me. My childhood memories of second-hand wars, lived through the crackling wires of long-distance phone calls and shortwave radio reports, had been revived by the war-at-a-distance of the post-9/11 world, mediated by the gun-camera and night-vision footage on the news, which I taped and appropriated for a series of works that later became my four-in-one-channel video, The Glass House Home Movies (2003).

As an artist who writes, an artist who works with both the poetics and politics of found text (in the collaborative, experimental archive Index of the Disappeared), and an artist who sometimes places text in public space on a large scale, I think of Jenny Holzer's scrolling Truisms as the standard: the work that made all subsequent works in this mode possible. Since the idea expressed by this particular truism seems to be forgotten more often than it is remembered, I keep an image of it on my phone.

Hollis Frampton's films combine rigorous cinematic structures with a sort of deadpan humour about the intricacy of their own construction that I find quite charming. Though I love Nostalgia (1971), the central section of Zorns Lemma (1970) is perhaps my favourite piece of Frampton's work: repetition with variation – the alphabetical organization of filmed text – that gradually transforms into a new lexicon through the substitution of actions for words. I screen the film for my students almost every year, and each time I find some fresh delight in it, from the glimpses of the city's past in the signage shots to the way duration is used in the substitutions.

A Brief History of Collapses (2011-12), my two-channel installation about history as viewed from the perspective of two buildings (the Dar ul-Aman Palace in Kabul and the Museum Fridericianum in Kassel), was a project that arrived fully formed, but took two years to wrestle into the shape. I wanted every shot in both channels to be moving through the architecture, and I planned to use a continuous voiceover that looped between different places and times.

I chose the buildings because they had almost the same architectural layout, but one was a ruin and the other had been restored. The degree of difficulty was increased by (a) the need to coordinate the shoots across the two sites; (b) the need to coordinate the edit across the two channels; and (c) an art-world budget. I joked at the time that it was like trying to make Russian Ark with a garden hose, two paperclips and a wad of gum. At a point when I was really struggling with the edit, Film Forum started a run of the restored print of Last Year at Marienbad, which I hadn't seen it in a theatre since 1997. What I realized during that screening is that, while you associate the film with long tracking shots of endless corridors, there are actually no long tracking shots in the film. Instead, Resnais uses short, discontinuous tracking shots, with match cuts based on the speed and direction of motion, as well as the balance of light and dark in the frame. The sequence of shorter shots combines with the Alain Robbe-Grillet narration, which describes the space across different times, to leave you with the impression that you have seen longer shots that don't actually exist. This realization led me out of my Collapses post-production dilemma.

Anyone who knows me (or follows me on Instagram) will know that I am a bit obsessed with windows. One of my early films, Permanent Transit (2001-2), is entirely shot through the frames of windows (of cars, planes, trains, boats, hotels and borrowed houses) in 11 different countries and points in between. In that film, they stand in for political borders and checkpoints, but in general, they symbolize thresholds, transitions, and points of encounter between different spaces, things and people. They're endlessly fascinating as visual subjects – so prone to distortion, reflection, and other optical illusions created by the interactions of light and glass. Magritte's window paintings play on our knowledge of the illusions windows can create, as well as their status as frames within frames, but are tweaked into more fantastical forms.

Speaking of reflections: the ‘Mirror Casket’, produced by a group of artist-activists in St. Louis (De Andrea Nichols, Marcis Curtis, Sophie Lipman, Damon Davis, Elizabeth Vega, Derek Laney, and Mallory Nezam), was deployed during the series of daily actions, protests and performances that came to be known as Ferguson October. It was intended to implicate everyone reflected in its shattered surface, calling out our complicity in the systems that perpetuate injustice, as well as our responsibility to resist them.

At the beginning of that October, the Mirror Casket was carried from the site of Michael Brown's death to the headquarters of the Ferguson police department. I was filming The City & The City (2015) in St. Louis at the time, and the performances staged by this group (also responsible for interrupting the St. Louis Symphony Orchestra to sing a requiem for Brown) inspired me on several fronts. Laney became the narrator of my film, giving voice to a dead man whose shade is following the investigator of his murder. The dead man is only visualized as a series of shattered mirrors, an insistent absence, both a break at the heart of things and a blankness into which others project their own desires and fears.

Just to bring this full circle (if you've seen the way Mona Hatoum uses light bulbs, you will know what I mean): Stephen Shore is brilliant at finding the grace notes in the everyday. Here, it's both how the light strikes the scatter of bulbs so that they seem illuminated, and the way the arrangement of bulbs strikes the eye as a sort of readymade installation. This image is full of things I love: a window, a boundary, reflections, duality, illusion, and a deceptively layered composition, which seems casual at first glance but reveals more and more structure the longer you look at it.

Mariam Ghani is an artist, writer, and filmmaker based in New York. Her feature film What We Left Unfinished is currently streaming on the Criterion Channel, and in 2022 she will have solo exhibitions at the Schneider Museum of Art in Ashland, Oregon, and Ryan Lee Gallery in New York City. 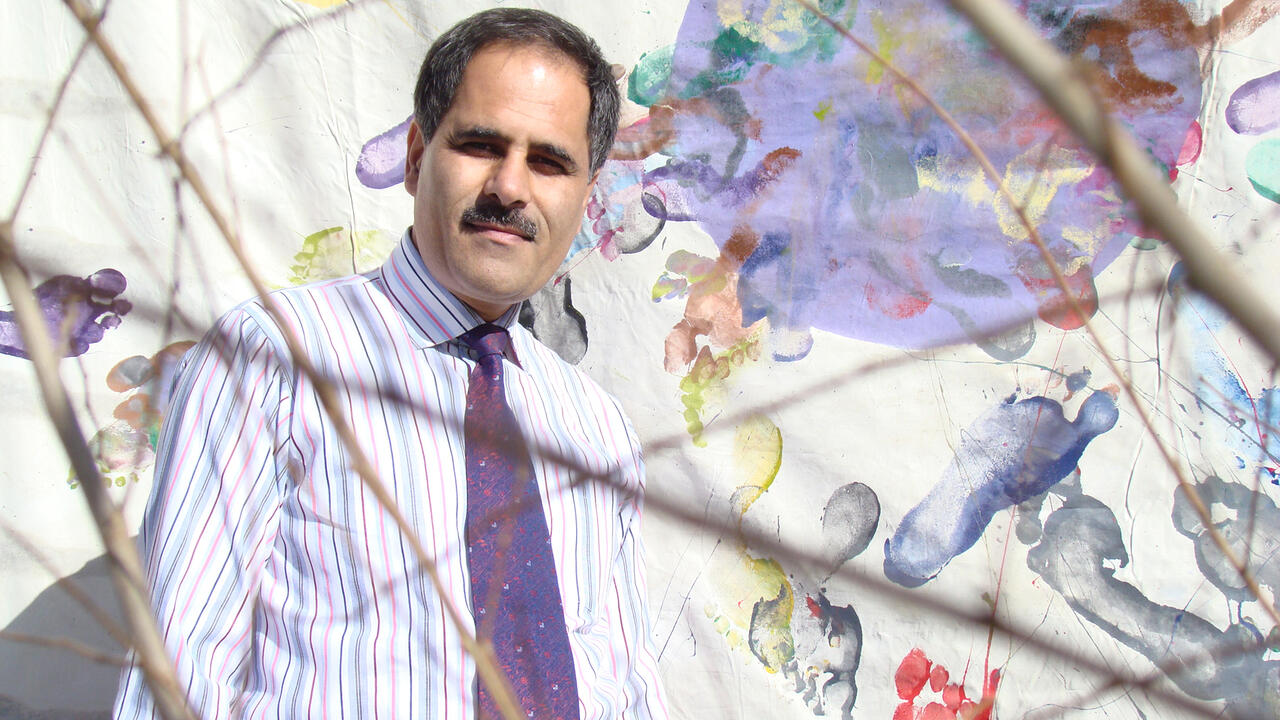 Interviews , Opinion
Rahraw Omarzad on the Future of Afghan Arts

Set under the context of a new Taliban regime, Mariam Ghani speaks to the artist about how the once sustained arts in Afghanistan will ensue