Portrait of a lady

Madame Yevonde, pioneer of colour photography and chronicler of the original Queen Mary 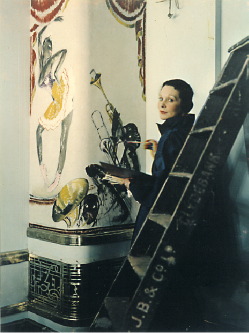 Madame Yevonde was born Yevonde Cumbers in 1893, to a wealthy family in Streatham. At 16 she was shipped off to stifling convent schools in Belgium and France, which left her with a desire to be as independent as possible and a passion for the suffragette movement. But on her return to Britain, Yevonde studied with the London society photographer Lallie Charles, turning down an apprenticeship with Lena Connell, the suffragette photographer. At Charles' Curzon Street studio Yevonde spent an apprenticeship cajoling Edwardian ladies into insipid poses on Empire chairs and bearskin rugs while they clutched bouquets of silk roses. After a year she transferred to 'The Works', the production side of Charles' studio, and learned printing and retouching.

By 1914 Charles' standardized poses and settings were proving too frustrating for Yevonde, so she convinced her father to give her the capital she needed to establish her own portrait studio. After a break to join the Land Army in 1916, Yevonde realized that she hated being an employee - she sympathized with the Land Army cause, but found the work harsh and preferred her independence. She returned to her studio with a new fervour and, as well as building a clientele of aristocratic and fashionable sitters, took commissions for advertising campaigns. Around 1932 she began to experiment with the Vivex colour process and became one of the first colour portraitists.

In 1936 Fortune magazine commissioned Yevonde to shoot a series of publicity photographs for the launch of the transatlantic ocean liner the Queen Mary. The Queen Mary was an amazing Art Deco palace, a floating magazine spread surrounded by miles of water on all sides to remove itself from the taint of bad design. But more than that, the Queen Mary was a place to live out a gilded fantasy, to inhabit the publicity stills of Hollywood films. Yevonde's photographs made the glossy dream seem liveable. She photographed the designers and workers responsible for creating the interiors of the Queen Mary without destroying the illusion of glamour. In one photograph a man in a trench coat and beret stands on an observation deck in front of the ship's magnificent 30-foot-wide funnel, his hand clenched in a salute. The way Yevonde has framed the shot makes it look as though the man's fist is pulling on the cables that stretch from the funnel to his deck - a clever trick of scale that can be read as a triumphal union of man and machine, working together for you, the honoured passenger, even as it suggests a colour still from an imaginary remake of Battleship Potemkin (1925). An image of carpenters bent to the floor in the ship's Catholic chapel, crouching in front of Kenneth Shoesmith's spotlit painting of the Madonna of the Atlantic (c. 1936) as they hammer nails into the floor, suggests that, although the ship's workmen have created the luxurious world of the Queen Mary and its patron saint, it is no less magical or sacred.

The success of the Queen Mary pictures led to more society commissions, and Yevonde's famous 'Goddesses' series. The rise of glossy magazines such as Vogue, The Tatler and The Bystander chronicled a new kind of café society - film stars, heiresses and artists all posed in couture for photographers such as Horst P. Horst and Cecil Beaton. But as Paul Poiret's orientalist tailoring fell out of fashion, in favour of Mainbocher's rigid suits or Lucien Lelong's cinematic satin gowns, being photographed or written about in one of these magazines was to become an object of worship for a moment, only to be discarded as that moment passed.

After the Olympian Ball held at Claridge's in 1935, Yevonde made the connection obvious: why not portray her social clients, these goddesses of the magazines, as figures from Greek myth, not for a moment, but for eternity? The portraits in the 'Goddesses' series could be beautiful, kitsch or scary, but they made their subjects appear enigmatic and more than fashionable in an ephemeral sense - modern, out of time. Part of this was due to Yevonde's insistence that photography be taken as seriously as painting. The identity of the sitters and the goddesses portrayed - Gertrude Lawrence, Noel Coward's leading lady, appears as The Muse of Comedy - were painterly in-jokes, and Yevonde printed her portraits on 12 x 15" paper, one at a time, to increase their value.

While a portrait of Lady Campbell as Niobe recalls Man Ray's famous close-up of eyes dotted with glass tears, Yevonde's work was too oriented toward Classical values of composition and commercial interests to be truly Surrealist. The colours and pose of Yevonde's portrait have more in common with the 1970s work of Guy Bourdin and Helmut Newton, both of whom straddled the worlds of advertising, portraiture and editorial work for fashion magazines, while creating sinister, sexually charged images. Niobe's skin glows with a yellow pallor, and her eyes are bloodshot. Yevonde's original glycerine tears didn't photograph well; nor did a glycerine and Vaseline substitute, which got into the sitter's eyes and irritated them so much that she started to cry. Her grimace of pain and natural tears seemed perfect to Yevonde, who rushed the flash. However, the Vivex technique Yevonde used required three exposures, one for each of three coloured plates. Each exposure took several seconds, and any motion on the part of the sitter would throw the registration of the three plates out of sync. Newton specialized in catching his subjects with a ring flash so that their skin looked bleached and their eyes glowed a vampiric red, but his was an instant transformation. Yevonde's subjects had to keep still, and suffer. Niobe still makes for uncomfortable viewing: the milky consistency of her tears and her pained expression make the portrait look like a still from a high-end bukkake film, an unending violation.

It's hard to believe that Yevonde's work with the Vivex process lasted only eight years, from 1932 to 1940. Her influence is everywhere today: from Cindy Sherman's plays on painting and disguise to David LaChapelle's tendency to cast his sitters in roles that play on their media personae. Yevonde's choice to portray Mrs Anthony Eden, wife of the Tory Prime Minister, toga-clad and bathed in blue light as The Muse of History is as over the top as LaChapelle's portrait of Britney Spears as a hot dog vendor spearing a hot dog to stick in a bun.

Yevonde hoped for such a legacy. One of her final colour self-portraits, taken in 1940, sums up her work during the 1930s and her opinion of it. Yevonde stands before a mirror on a fur-draped dressing-table. Her shutter cord and a butterfly necklace loop over the frame. Are the bottles on the dressing-table cosmetics, magical supplies or photographic chemicals, or is Yevonde implying that all these are more or less the same thing? Clipped to the frame of the mirror is a black and white photograph, tattered around the edges, perhaps dating to the time when Yevonde worked for Lallie Charles. But inside the mirror Yevonde holds a small, framed photograph of Hecate, goddess of witchcraft - she who creates. Hecate, from the 'Goddesses' series, was the future of photography as art. True, the Vivex processing labs had just shut down because of the war - this was the end of an era. But there she was, there she is, the photographer as sorceress, with the magical ability to transform and preserve for ever.

Emily Bick is deputy editor for The Wire Magazine and a writer on music, art and technology, based in London.