Once upon a time, there was a kingdom called Lanna. The kingdom resembled present-day Northern Thailand and included some of present-day Myanmar, which bordered it to the west, some of present-day China, which bordered it to the north, and parts of Laos. The first King of Lanna, King Mengrai, created a new capital, Chiang Mai (‘new city’), in 1296. It remains the capital of Northern Thailand and its urban and rural landscapes, walled city, moat and many temples are infused with a sense of the fantastical. Chiang Mai is a mix of local traditions (the city’s Lanna heritage is evident in its architecture, silverware, woodcraft, textiles, weaving and dance), millions of tourists (9.6 million in 2016 according to the Tourism Authority of Thailand), innovative permaculture farms and rich gated communities with imposing villas and tennis courts. In recent years, the city has seen the beginnings of gentrification as well as advancements in the terrain of contemporary art.

‘I feel like the present is more valuable in Chiang Mai,’ the Korean artist Jei Park told me.  Park is a student at Chiang Mai University of Fine Arts (CMU) and, along with fellow students Myo Myint, a painter from Myanmar, and Anchalee Chaiworaporn, a film critic from Bangkok exploring a second career in fine arts, is part of a new wave of artists in search of an alternative to the Bangkok art-world establishment.

Things are developing. The second edition of Galleries Night Chiang Mai took place on the evenings of Friday 27th and Saturday 28th of January 2017. I began with a visit to the non-profit organization and community art centre Baan Tuek Art Center, run in association with CMU. It was showing a group exhibition of works on paper realized among artists friends and university professors from the Australian National University and CMU: satisfying, but only just. Within the walls of the old city, a visit to Matoom Art space proved to be more invigorating. The artist who runs this small gallery-cum-shop, Chumpol Taksapornchai, makes feel-good watercolours and pastels on paper, fairytales-like hills and little figures. A little out of step with contemporary art codes but, considering this former Buddhist monk created his space to share happiness through art, the energy of it was infectious. ‘Matoom has two meanings: the Bael fruit or herb, which serves to heal the body – thus I see it as a healing space for arts – and that of “coming together,”’ Taksapornchai explained with a smile. In addition to his works, the cramped walls showed comic– (or cosmic–?) inspired paintings by young artists Sanchai Chaiyanan, featuring zany green-skinned characters and collage-like drawings of vivacious personages and anthropomorphic animals by painter and guitarist Isarakorn Tuntrakool.

Mini-Wall at D Bistro Gallery was busy, too. Literally a wall in a bistro dedicated to exhibitions, the owner-collector Narun Wiwattanakrai gave carte blanche to Chiang Mai artist Pichakorn Chukiew (known as Tua Pen Not) to curate it in support of young artists.

According to Chiang Mai Art Conversation (CAC), a non-profit created in 2013 that is behind the Chiang Mai Art Map (a must to grab on any visit), the number of active art spaces in the city varies every year. (At the time of this article, there were about 60.)

On Saturday 28, Gallery Seescape threw a lively party. Created by artist Torlarp Larpjaroensook in the trendy Nimmanhaemin neighbourhood, the gallery is a favourite hang-out for many artists. The current exhibition by Tada Hengsapkul had people dancing as part of a performance, and curator Kittima Chareeprasit (Joyce) encouraged everyone cheerfully. In April, the gallery will show works by Piyarat Piyapongwiwat (Khim) who is also a serial visitor to Chiang Mai. ‘I like the atmosphere here,’ she explains, ‘and living costs are cheaper than Bangkok.’ A winning formula for artists.

A few blocks away, local designers took over several streets creating a designer/crafts market with live jazz music. ‘Art is slowly making its way into Chiang Mai’s daily life,’ said Kitikong Tilokwattanotai (Kong), who founded C.A.P studio (Chiang Mai Art on Paper) in 2003. Kong, an artist himself who just opened a solo exhibition of abstract paintings at Sombat Permpoon Gallery in Bangkok, wanted to create space for printmaking in the city, with visible success.

As if to upscale this multiple network of private initiatives, last year Chiang Mai saw the opening of its first contemporary art museum. MAIIAM was founded by Jean Michel Beurdeley and his late wife Patsri Bunnag, together with their son Eric Bunnag Booth, and opened in July 2016. (The name is a play on words that combines the ‘Mai’ of Chiang Mai’s ‘new city’ with the name of Bunnag Booth’s great-grandaunt, Jao Jom Iam, a royal consort to King Rama V.)  The gallery showcases the family’s collection, which includes works by Montien Boonma, Kamin Lertchaiprasert, Chatchai Puipia, Araya Rasdjarmrearnsook, Navin Rawanchaikul, Natee Utarit, Vasan Sitthiket, Pinaree Sanpitak and Rirkrit Tiravanija, several of whom live in Chiang Mai. It also aims to present international contemporary artists as well as pay homage to the skilled artisans and craft culture of northern Thailand (its heritage from the days of the Lanna kingdom). Bunnag Booth explained: ‘Chiang Mai arts and culture have flourished for over 700 years. Over the past 25 years, the contemporary art scene has grown organically without government assistance. Artists and gallery owners from all over Thailand have joined their northern colleagues and together have created a vibrant art scene.’

By January 2017, the museum had counted 24,000 visitors to its 3000 square-metre space, designed by architect Rachaporn Choochey of architectural firm allzone. ‘More than 70 percent of the paying visitors are under the age of 35. This is very exciting!’ emphasized Bunnag Booth. On show during the galleries night was ‘Timeless Present Moment’, a retrospective of the work by Kamin Lertchaiprasert. Encompassing photography, paintings and sculptures that oscillate between realistic representation and symbolic aesthetics, the exhibition points to the artist’s aspiration to reconcile two seemingly contradictory lifestyles: the yearning for spiritual development and personal success in the contemporary art world. This ‘spiritual aesthetics’, dear to Lertchaiprasert, is not quite convincing, in spite of the several strong works that make the exhibition worth seeing. 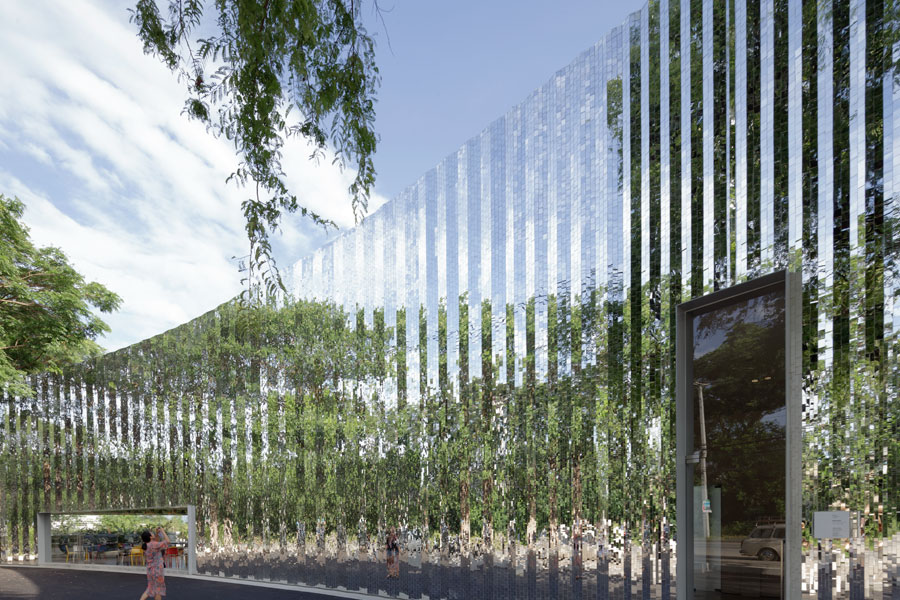 Curator Vipash Purichanont notes than since the 1990s Chiang Mai has been a place for fruitful discussion and alternative art education outside of the academies: ‘I have seen artists, critics, curators, gallerists as well as audiences travel between Bangkok and Chiang Mai more often now. Artists have moved to Chiang Mai while they might prefer to exhibit in Bangkok. It means that they are participants in both circles in different ways.’

When I asked artist Chai Siris (Teem), what he liked most about Chiang Mai, he responded that ‘the art scene is small, yet energetic. Artists, scholars, writers, and students always exchange [information] about their events. The communities are not as divided as in Bangkok.’ Ultimately, it is a question of lifestyle: ‘My studio is on a hill 30 minutes from town. I collaborated many times with my neighbourhood for art projects. Here time goes slower and the air is sweeter. It is a good source for creative thinking.’