The instructions are very precise. Guests at A House for Essex must alert an agent 30 minutes before their arrival. On meeting said agent at the property, you are required to hand over photo ID, produce booking documents and listen to a run through of the security arrangements. The house is wired: CCTV cameras are trained on all the artworks but those in the bedroom and an alarm will be triggered if they’re touched. We’re told that is almost inevitable, given their number and the house’s compact dimensions, but security will only arrive if the embedded GPSdevices sense that these pieces are being transported up the lane. Likewise, we will only enter the view of the concealed cameras if we get too close to the art. In spite of these reassurances, it becomes apparent that much of our movement over the weekend will be recorded. A House for Essex is a collaboration between Grayson Perry and the architect Charles Holland, when he was still at FAT Architecture. Both of them make work that comments on contemporary Britain, so perhaps this feeling of being constantly monitored is appropriate. 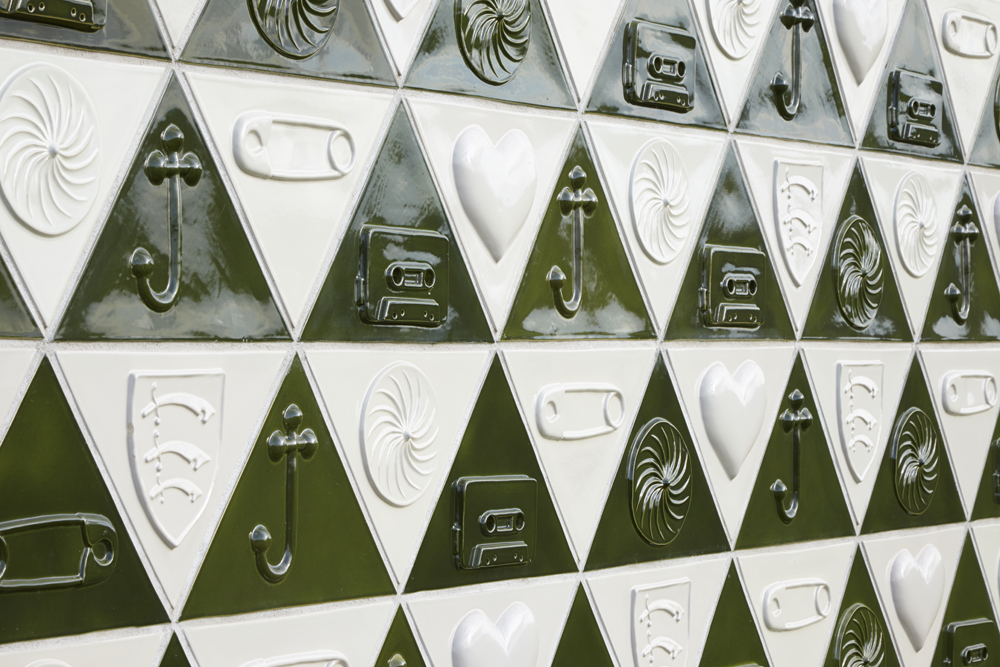 The house sits at the edge of the village of Wrabness in north Essex, roughly two-and-a-half hours drive north-east of London. We arrive in the dark after a panicked negotiation at the M11-A12 interchange, our deadline being an Ocado delivery of groceries we had scheduled to arrive at our destination. Perry describes the house as a temple to the ordinary, and so far we have done it proud with our mundanity. The building is divided into sections. The first area you enter is a transitional space, with pleasingly practical coat and boot storage; the next a kitchen-dining room of modest proportions, with the bedrooms above; the third a double height ‘chapel’ – the interior which provides the focus for Perry’s storytelling and Holland’s decorative flourishes. The first night we don’t get much further than the kitchen and the reading matter left for us on the table. The guide to the house includes Perry’s ‘Ballad of Julie Cope’, a 3000-word epic poem that was the genesis of the building. Perry imagines the house as a ‘secular chapel’ and Julie May Cope is its imagined object of worship. Born on Canvey Island, (at the mouth of the Thames estuary about an hour’s drive south of the house) during the floods of 1953, she lived through a tense childhood to become a ‘shopping-mall Madonna’. She stumbled as her first marriage failed, but was eventually reborn into the middle classes through a degree at Essex University and a second marriage to a ‘sweet IT tech called Rob.’ Her life becomes one of ‘good talk and wine, longer walks, slower art’ with ‘complex friends with broadsheet lives.’

Perry’s stories are deeply satisfying in their precision of detail and affection for their female subjects, but in the context of a kitchen stocked with carefully selected David Mellor cooking implements, the paean to middle-classness verges on cloying. The reverberations between the story and the situation become overwhelming. Glasses of red wine quiver as an implosion of chattering smugness threatens.

We sleep in a bed loomed over by a tapestry depicting Julie’s ‘polyester wedding’ in 1974 (all the artworks in the house are by Perry). The other bedroom is devoted to her second marriage, grey-bobbed with wayside flowers. 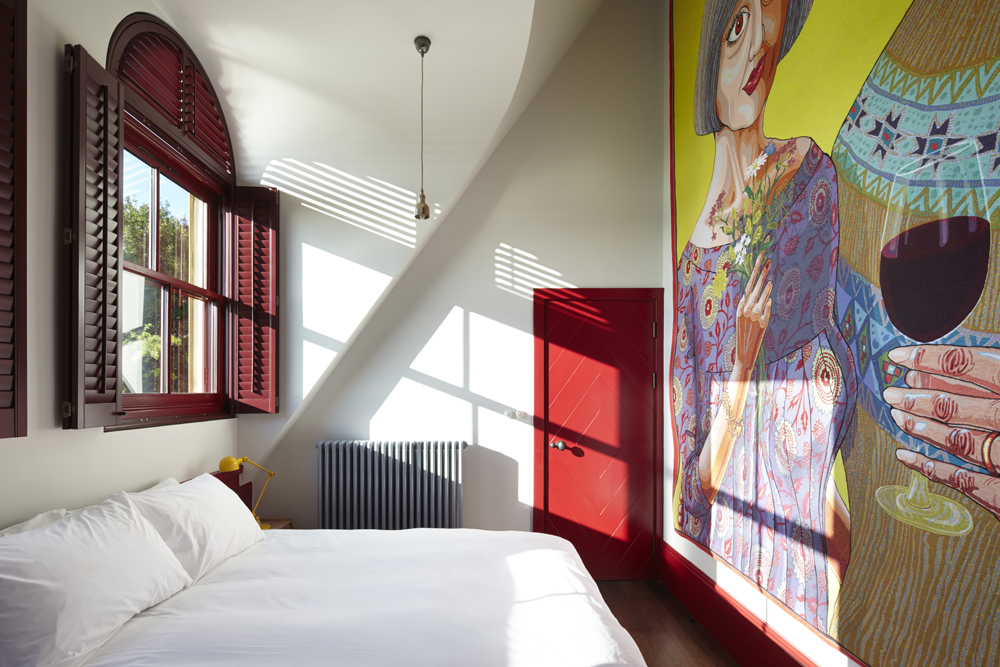 The rain on the Stour river is relentless. We broach the house’s main space, its ‘secular chapel’. It’s like spending time in Perry’s head, no bad place to be on a wet day in Essex. The are two very large tapestries on each side of the room, one showing Julie’s birth and her evolution from a rock chick to a young mum and the other her path from divorcee through her happy second marriage to her death, at the wheels of a scooter delivering a take-out curry, aged 61. Now, this death bothers me. Ovarian cancer, rendered fatal through late diagnosis, would have been much more ordinary and a much more accurate reflection of contemporary Britain. It’s not my habit to quibble with the course of fiction, but Perry’s method invites it. He has achieved national treasurehood for his particular combination of observation and empathy.

As with Perry, Holland’s architecture is driven by detail. In an essay in the guide to the house he mentions folk art, Adolf Loos, Edwin Lutyens, Sir John Soane, John Vanbrugh and pop. In the more practical part of the building this leads to fabulous touches such as yellow grouting between the white tiles in the shower, while in the theatrical chapel there is a vast pop-baroque screen. This supports a full-size ceramic sculpture of Julie with two cuckoo-clock balconies that lead from the bedrooms on either side. Among my favourite House of Essex moments is the narrow mirrored section between the kitchen and chapel. Passing from a cup-of-tea state to a contemplative mode, very briefly you become infinite. 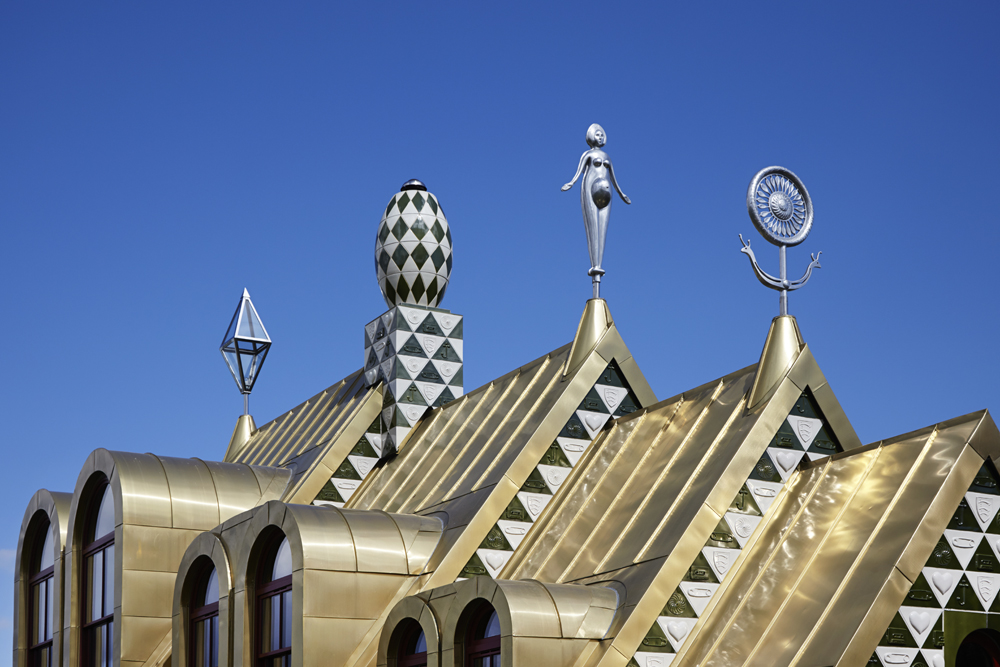 That evening we pick up the ‘Conversation Menu’ provided by Living Architecture, the organisation that built and runs the house – and which manages seven other locations spread across the UK, all rentable and all designed by acclaimed architects. The presumption that your conversation might fall below par or falter without their help is extraordinarily irritating in itself and the questions are even more irksome. ‘What do you think influences your mood most on a daily basis? Rank these in order of importance: the weather, architecture, food, sleep, work, money, relationships’: The starting point of a fulfilling discussion among adults? Really? It seems unfair to criticize Living Architecture. The project is ambitious and their understanding that contemporary architecture is best appreciated in the context of comfy beds and good water pressure is commendable. Yet the banality of the ‘Menu’ detracts from Perry and Holland’s ingenious fusion of practicality and theatre. 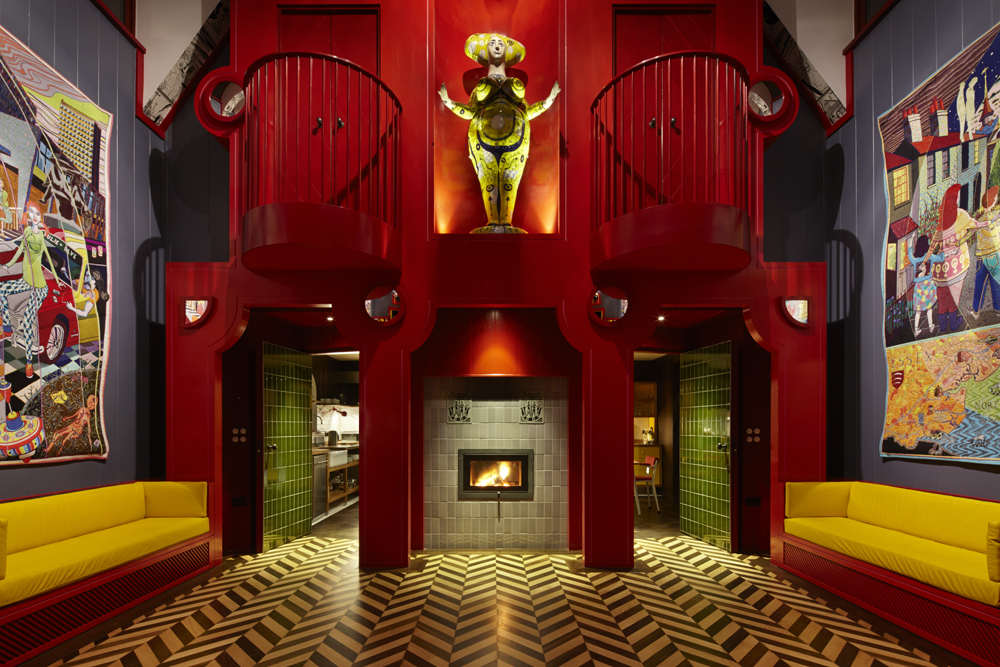 The rain eases a little, enough to contemplate Julie’s house from the outside. It has a Russian doll effect in that its four sections look as if they could be tucked into each other. The exterior is entirely clad in ceramic green and white tiles, each one with a three-dimensional decoration of either a naked figure of Julie or a symbol of her life. Four sets of two arched windows increase in scale across the length of the house and the gold roof holds four emblems: a glass lantern, a ceramic egg that is the chimney pot, Julie in silver and a wheel. Reached from the south, from the village of Wrabness with its train station and community shop, the entrance is homely, but from the north, the side that faces the Stour, it is more imposingly ecclesiastical, with a flight of steps and a porch with a mosaic floor.

We brave a very damp walk to the nearby town of Mistley. It was decidedly one of Perry’s ‘longer walks’ (down what I later discover is not a footpath as we leg it through a back garden). Mistley is a small industrial town with moments of magnificence. Chief among them are the Mistley Towers, which were designed by Robert Adam in 1776. They formerly held a church nave between them, but now stand alone, surrounded by graves. Wikipedia tells me that they were part of a grandiose plan to transform Mistley into a spa town – the brainchild of a wealthy politician named Richard Rigby. It sounds a very Perryesque story to me (or perhaps Perry with a touch of Anthony Trollope). A House for Essex creates a confusion in being both small scale and outsize at the same time and the same is true of the Mistley Towers. What’s more, they share certain details such as the combination of arches and circles. Predictably enough, some members of the local community have protested that A House of Essex is not in keeping with its surroundings, yet Holland’s building has an outlandish quality that is deeply rooted in its environs.

The clouds part sufficient for a sunset. Pink light plays over the fields and the gold roof of the house. 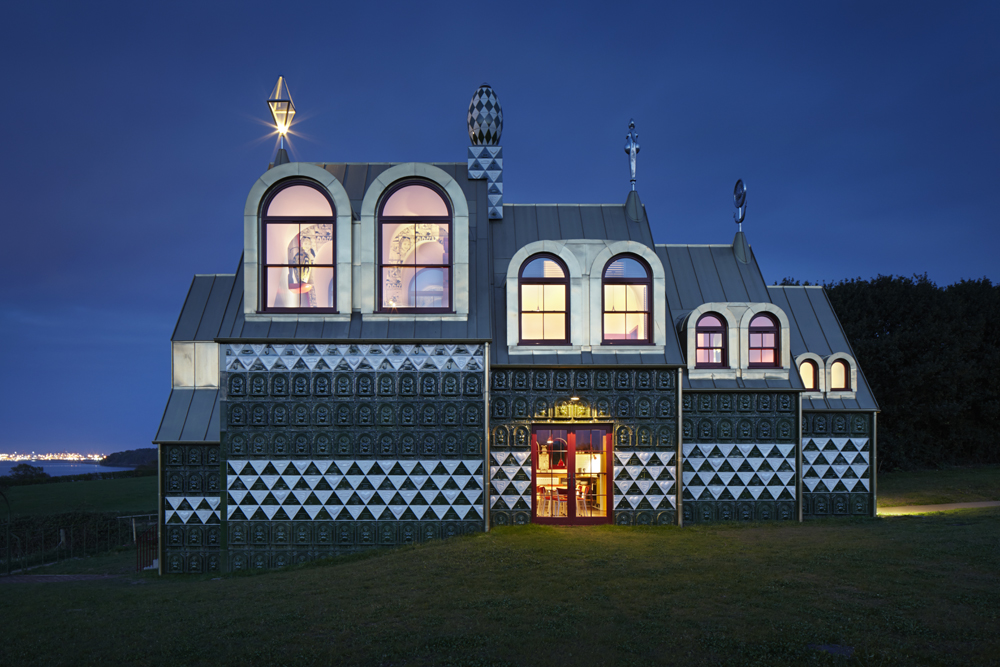 Check-out time at A House for Essex is 10am sharp, but the first rays of proper sunshine seen in days beckon and we pack our car and take another of Perry’s ‘long walks’ up the Stour estuary towards the port town of Harwich. The situation of the house is fabulous. Poised above the river, it looks out on a glorious combination of fields, water, wildlife and industry.

Seeing the house from a distance for the first time as we return from our walk is a revelation: its playful form, the way the roof reflects the sunshine, the touching ambition of its perched emblems. It belongs, not in spite of being extraordinary, but because. It is an Essex fairy tale, and I am sold enough on Perry’s story to believe that Essex is perfectly capable of giving birth to such a confection.