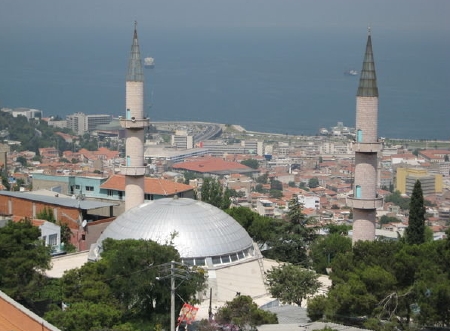 Aside from the harrowing depiction of the city burning and the plight of refugees during the 1920s Greco-Turkish war in Jeffrey Eugenides’ novel Middlesex (2002), I didn’t know much about Izmir before going there. But given the stated aim of the second installment of ‘Portizmir 2’, their contemporary art triennial, to produce not only an exhibition but also ‘a dialogue between contemporary art and the people in the city’, I knew that would have to change. Luckily for me Turkey’s second biggest port after Istanbul, and third largest urban centre, is welcoming to strangers and trade. Intertwined historical, cultural, social, political and religious conflicts, and myriad contradictions that they give rise to, are rife in contemporary Turkey. That country’s current high-energy state – propelled by a young aspiring population realigning in a rapidly restructuring and growing economy – has only served to make them all the more palpable. Izmir is no exception and on every corner its historically patchwork, multi-layered urban fabric bears testimony to struggle and change both past and present.

For example, one aspect are the problems and political realignments associated with the massive intra-national migration of Eastern Anatolians to the West Coast. Rising above downtown, for instance, is a mountain – evocatively nicknamed, for reasons time has obscured, Kadifekale (literally the ‘Velvet Castle’), crowned by the ruins of a fortress built by Alexander the Great with panoramic views of the sprawling city and ship-filled bay. On one flank beneath the earth is a huge ancient amphitheatre waiting to be dug up – ‘if only’ thousands of bitterly poor migrants who have built ‘over-night’ houses on top of it could be coerced or persuaded to abandon their makeshift homes for social housing tower blocks. When I visited the place with my Triennale hosts there was a group of women sitting under a pine tree weaving a traditional blanket with non-tradition wool on an improvised loom held up by stakes and a few rocks. They told us that they didn’t mind being photographed – just as long as we didn’t put their faces on Facebook. The only English word a few curious kids who gathered around to joke knew was ‘money’. On the opposite flank of the same mountain, thousands more bright painted honeycomb ‘illegal’ homes look down onto a serpentine freeway solemnly shadowed by a Republican cliff-hugging monument to the Republic’s omnipresent founding father Atatürk. His giant face merges from the rock like a kind of concrete parody of Mount Rushmore.

Coincidentally, my departure flight a few days later out found me at the local airport on 10 November, at 9:05am – the moment when the nation annually stops to the sound of screeching sirens to commemorate the anniversary of his death. I will never forget their sound and the sight of the stern, instantaneously frozen bodies and faces of thousands of travellers, which at first seemed to me inexplicable and therefore chilling. All this and much more made me think of both how much and how little the words and ideas like local and international ‘context’ can mean when used in contemporary art. Contexts are the real walls that all art hangs on.

It was against this backdrop that curator and art historian Necmi Sönmez subtitled the Triennale ‘Silence_Storm’, noting: ‘I was wondering if I could reach beyond silence, beyond calmness, I came to believe that this could also be a “dream storm”. Storm was a means, a suggestion, for a way to overcome an ease caused by a prolonged silence.’ The main exhibition venue was a derelict tobacco warehouse, formerly the Austro-Turkish Tobacco Building, was temporarily donated for the purpose by a supportive local businessman as the building is earmarked for demolition. So unlike most perennial exhibitions, this Triennale – comparatively modest in scale and budget – is largely the result of the initiative and funding by local arts community figures and a network of wealthy patrons rather than government. The building was designed by Austrian architects in the 1950s, and was once part of the then massive state-owned tobacco industry Tekel’s infrastructure. A couple of years ago the industry was privatized, partly in accordance with the IMF’s conditions on loans to the Turkish State. The rationalization and accompanying disappearance of jobs and factories caused protest, not just because of vanishing livelihoods but also because the state-owned monopoly established in 1932 was also a focus of Republican national pride. In addition, the Triennale also hosted parallel project sand events at Izmir’s French Culture Institute and an artist’s residency premises run by the K2 Contemporary Art Center focused on the idea of giving voice to Izmir’s ‘cultural memory’. At one of their soirées, an extremely diverse bunch of artists and historians took to the elegant old stage in the French Institute – one of the oldest modern theatres in Turkey – and gave presentations ranging from an over-the-top post-feminist performance rant parodying authoritarian education-style to a slide lecture by a local historian and heritage activist which made the audience collectively gasp about the sorry state and treatment of many of Izmir’s innumerable cultural relics.

A sponsor gave everyone pine tree seedlings afterwards. The exhibition part of the Triennale extended over the five floors of the warehouse which, though empty, still had a vaguely lingering sweet smell of the leaf. Here was the work of 40-odd artists– two-thirds of them young Turkish and emerging. The exhibition relied on in situ, made on location or easily shipped contributions and was none the worse for it. Deniz Kurtel’s interactive light installation, Equilibrium (2010), introduced the show. Her work responded to the conversation of any viewers in the darkened room but lighting up what looked like a cascading hall of mirrors. Here the primarily local viewers are literally the source of both light and discourse of their own making. Markus Keibel meanwhile turned the viewers into agents of dispersal and mark makers with his pigment floor piece, Written on Water (2010), through which he invited people to trample. Many works responded directly to the building in some way. Fabien Verschaere and Mehmet Dere both made wall paintings as if conscious of art here being in a squatter-like scenario. The former was Never Ending Story (2010), which looked like riotous comic-style graffiti, and the latter, Self Service (2010) declared in capital letters: ‘DEMOCRACY HALF PORTION BEANS HALF PORTION RICE HALF SOUP JUSTICE A BIT OF THE SAUCE TOO’.

Some artists made works using objects found in the building, such as Anna Fasshauser who turned a collection of tin stencils for tobacco sacks into editions as well as producing the stand-out installation Very Silent Luggage (2010). This work consisting of a suite of black and white photocopies of photographs of luggage wrapped around support pillars. Half a dozen or so video works all added to the overall extremely sombre tone including Maja Bajevic’s disturbing face slapping performance video, How do you want to be governed (2009), in which the title’s question is asked repeatedly like an interrogation to the abused and passive sitter, and Mounir Fatmi’s video Beautiful Language (2010), primarily consisting of remix of ‘educational’ scenes appropriated form from Francois Truffaut’s film L’Enfant Sauvage (The Wild Child, 1970). This exhibition didn’t shy from summoning the ghosts of the past – not in a fit of nostalgia but rather as a form of preparatory catharsis. Contemporary art too already has its ghosts; how appropriate then that the last work on the final floor of the exhibition was a sound piece by Joseph Beuys, JA JA JA JA JA, NEE NEE NEE NEE (Yes Yes Yes Yes Yes, No No No No No, 1968), an endless monologue pronounced self-ironically in a German dialect and implicitly an insistence that there is a space beyond thumbs up or thumbs down, beyond a yes and no dialectic. A space of productive contradictions and ambivalence – this is the space for both art and art criticism.