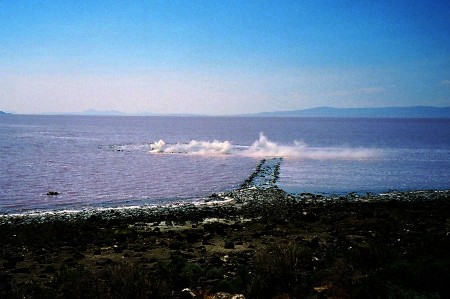 Before this screening of Cyprien Gaillard’s films and videos, and performance by the musician/composer Koudlam, whose MySpace page describes his music as ‘electronica, tropical, psychobilly’, I had already seen most of the artist’s critically acclaimed works in various venues all across France. Gaillard, who was born in Paris but raised partially in the US, is a self-styled heir to the aesthetic of Hubert Robert Smithson, his artistic amalgam of Robert Smithson and Hubert Robert, the 18th-century French painter of landscapes and ruins. In his 35mm film series ‘Real Remnants of Fictive Wars’ (2002–8), white clouds of chemical spew from fire extinguishers and infest natural landscapes.

But Gaillard’s preferred subjects are modernist housing blocks, those ‘new monuments [that] seem to cause us to forget the future’, as Smithson described them in his essay ‘Entropy and the New Monuments’ (1966). The programme included Real Remnants of Fictive Wars VI (2008) and The Smithsons (2005), both of which explicitly reference the influential land artist. The former film shows smoke billowing from the curve of Smithson’s Spiral Jetty (1970) and the latter video scans, to the tune of The Smiths’ 1987 lullaby ‘Asleep’, nondescript apartment blocks lining the New Jersey river banks off Manhattan in a less-than-convincing nod to Smithson’s 1967 photo-essay The Monuments of Passaic. In these works, there is perhaps too much literal and figurative distance between Gaillard and his subjects, for neither one arouses more than curiosity. His compelling The Lake Arches (2007), on the other hand, manages to incite empathy.

Shot at an astonishing Postmodern building complex in a Paris suburb designed by Ricardo Bofill between 1979 and 1986, two men misunderstand instructions and dive, rather than jump, into the shallows of the lake around which the project was built. As one of them emerges from the water, the camera concentrates on his smashed and bloodied nose. His companion laughs, while the structure behind floats mutely on the water like a sinister concrete version of a Loire Valley chateau. There is something about the intimacy of this scene that recalls and renews the spirit of Jonas Mekas’ Walden (Diaries, Notes and Sketches) (1969). Members of the audience cheered when Koudlam, resembling that ultimate Romantic rebel James Dean, with his slicked-back hair, dark glasses and bomber jacket, stood beneath the screen to accompany Gaillard’s Desniansky Raion (2007), a tripartite film combining found and self-shot footage of hooligans brawling in a parking lot, a sound and light show celebrating the demolition of a tower block, and an aerial sweep of a sprawling housing complex outside Kiev, which brings to mind Smithson’s filmed helicopter journey over Spiral Jetty. The music, which increased in tempo as the film progressed, had an infectious tribal beat, but the lyrics were difficult to make out.

While many critics find Gaillard’s approach to the question of place topical, I had hoped this screening would alleviate some of my ambivalence towards his work; an ambivalence admittedly spurred by the cultish fervour he seems to inspire, but also by doubts as to the critical potential of the nostalgia he claims to harbour for this ‘endangered’ architecture. Gaillard has certainly touched a nerve, but I haven’t yet decided if my interest is piqued or has peaked.

The artist’s exhibition at Galerie Sultana, Paris, explores compassion as a means of resisting capitalism