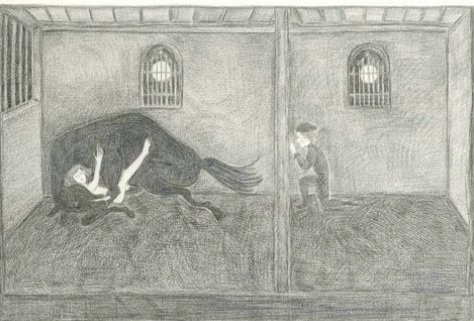 The figures inhabiting Zuckerman's drawings originate with a European archetypal cosmos made of old folk and fairytales as well as their later psychoanalytical interpretations, blending enchanting sweetness with creepiness. Several motifs reappear in her works in varying, contradictory roles that serve as coded signs in a dreamlike syntax. A clock appears as a house, a harmless bear appears to be intimidating and vigorous, a girl is raped by a black horse: in one image she is seen lying underneath the dark beast, and in another she is on top of a bed, her legs spread, watching a monkey dance.

Adopting the point of view of a child, for whom imagination compensates for the indecipherable, a surplus of desire, or unbearable fear, Zuckerman’s drawings repeatedly render an impulse to see what lays behind closed doors, walls or shuttered windows. They depict acts of peeping at what is forbidden or inappropriate, just as they appear to be products of such a gaze. In her works, doors, windows and ornamented frames serve as additional framing devices, implying the condition of the drawing as a representation that is clearly separated from the outside and held together by a frame.

In Smoke (all works 2012), three women that look like Russian matryoshka dolls are wrapped in cloaks and gathered around a bonfire in the middle of a forest. Over their heads a white moon glows. The women's faces and hands, as well as the smoke that rises from the fire and curls up to the edge of the drawing, share an unfilled whiteness with the moon. Those surfaces are left untouched by the artist, unravelling her diligent drawing work. Zuckerman systematically repeats this technique in all of the works; darker surfaces are made of densely drawn lines while the brighter surfaces are in fact ruptures that expose the paper as a surface. In Bears looking through a hole and Keyhole, an opening of a keyhole is left undrawn, depicting a blank space to which the viewer’s eye is naturally drawn. It pulls our gaze ‘inside’ but merely leads it to the empty surface of the paper.

Indeed, positive and negative ‘holes’ appear repeatedly in Zuckerman’s drawings, serving both as punctures in the image and as orifices. Two large drawings hung in the gallery’s corner facing each other clarified Zuckerman’s inversions. Hole depicted a black, rectangular opening in the earth and a pale moon, while Two mountains with a cave shows a mountain pierced by a round black cave that looks like a naked woman spreading her legs.

All relations between things – the sun and moon, man and woman, human and animal – are measured here through inversions and are driven by a wish to violate established hierarchies. Despite the fact that her drawings look like engravings, made in an incising process through reduction or subtraction of the material, Zuckerman’s drawings are in fact made in an act of incremental layering. What seems to be emerging is in fact recessing; whoever seems to possess power is also threatened by castration. The moon’s status as a reflective object always corresponding to a sun is mirrored in the figure of the pale girl that inhabits the works in ‘What the Moon Saw’ as a leading protagonist. She cannot be imagined without her complementary inverted double – the unseen power-holder, whose potency she apparently seeks to challenge.

In a drawing made by Sigmund Freud’s most renowned patient, Sergei C. Pankejeff, also known as ‘The Wolfman’, that has become canonical in the history of both psychoanalysis and art, a nightmare of a four-year-old child is depicted in sketched lines. It shows six white wolves sitting on seven bare branches of a tree, staring silently at the boy whose window had just been opened by the wind. Freud, a linguistic archaeologist, went back and forth in time to reconstruct relationships between vision, memory and language (signs). The image, like the dream, is gapless, every detail leads to a word, the work of dreaming is configured as a functional, meaningful activity. The Wolfman’s nightmare, according to Freud, reveals to the child what he saw several years earlier but could not grasp, a scene that was a catalyst for the phobias that were to haunt him as an adult. The white wolves on the tree were a precisely inverted code for the ‘primal scene’ to which the child had been a witness (their stillness for example, stands, according to Freud, for excessive movement) – his memory of waking up to see his parents making love.

Zuckerman's works in ‘What the Moon Saw’ share a cultural Russian heritage with the famous sketch. Both breathe the same air of folk tales in which wolves prey on young lambs, tailors cut wolves tails, and hunters, farmers, bears and birds dwell in the midst of dark forests (as seen in Zuckerman’s drawings Dogs barking at squirrel, Prince of the egg, Storm and Smoke).

Moreover, they too evolve around a secret of horror and attraction, something that is seen yet is also inscrutable. Her images, however, do not lend themselves to semantic reestablishment of meaning. Their syntax is a system that has no decipherable or concrete functional result. The primal scenes here remain opaque and unresolved.

Tal Sterngast works as a writer and artist in Berlin.