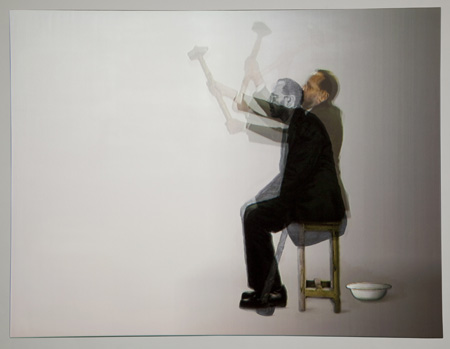 Morphing and reproducing exponentially, the image, as we now know it, is perennially beleaguered. To outwit this condition is a challenge, but Ranbir Kaleka is happy to pick up the gauntlet. Having studied art at the Punjab University in Chandigarh, Kaleka moved to London in 1985, where he completed his MFA in painting at the Royal College of Art and remained in England until finally returning to Delhi in 1998. ‘Sweet Unease’ was the 57-year-old artist’s first solo show in India since his return. The exhibition encompassed Kaleka’s decade-long multidisciplinary practice; barring the video Man with Cockerel II (2004) – the earliest work in the show – all other works were video projections on painted images.

Before merging painting and video to create a spectral cinematic interface, for two decades Kaleka honed a painterly practice of considerable theatricality. His penchant for surreal juxtapositions is evident in early works such as Hula-Hoop (1978), in which the celebratory title contrasts with near-apocalyptic imagery of mutation. In these tableaux, Kaleka mined motifs of his childhood in Patiala, Punjab, such as cockerels, horses and wrestlers, as well as his fascination for outré inventions and his absorption with light, which he deftly controls through his use of pigment. Everything Kaleka privileged in his paintings continues to exert gravity in his multimedia work. Be that as it may, his shift away from painting is germane.

Kaleka’s mid-career departure was a compelling move away from what was a successful and established painting practice. Instead of settling into complacency, the artist experimented with the interface of painting and video. ‘Sweet Unease’ allowed us to relish the possibility of the cohabitation of two media that are often shrilly set against each other. For the most part, the video projections propel Kaleka’s whimsical and nonlinear narratives forward as they reveal, fade out and collude with his painted images. In the titular work, Sweet Unease (2010), two painted canvases – each featuring a figure at a dinner table – flank a central panel that hosts a video of tangled wrestlers. In this triptych of sorts, the central section is a deeply pitted and mucked up patch of wall, its texture beautifully evoking the grit and grime of the wrestling arenas that dot Indian towns and villages. The paintings on either side are also visited by projections, including videos of the aforementioned figures, as they get overlaid on their painted counterparts, which mingle with the existing painted domestic scenes. The two distinct narratives feed into each other when the projected male figures decide to slip away from their decorous dining tables and enter into a tackle on the wall.

In works like these, the projected and the painted dovetail intermittently but also expose a lag. An image might split up, or fan out upon the painted surface, as if the result of a concussion that makes you see double. In these moments, Kaleka appears to make a strong aesthetic case for that repeatedly Photoshopped, downloaded and vexed image that is symptomatic of our digital culture. Despite their technical sharpness, his impeccably installed works were not overrun with any of the gratuitous slickness that multimedia video installations usually imply. Instead, it seems as though Kaleka is attempting new methods to trap, absorb, amplify and rejuvenate light; in the process he has created something unexpectedly ethereal.

Gitanjali Dang is an independent curator and critic based in Mumbai, India.