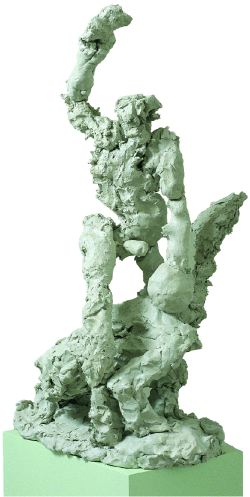 In Carol Reed's film The Agony and the Ecstasy (1965), Chuck Heston daubs the Sistine Chapel while Rex Harrison (the Pope) tries hard to dissimulate his jitters as the completion date slips out of sight. Rex would have had a hell of a time guessing whether anything was complete or not in Rebecca Warren's exhibition 'The Agony and the Ecstasy'. But if the Sistine Chapel epic is all about patronage and genius somehow rubbing along lubricated by implausible love interests, Warren's ten work gag-fest is more about pushing the envelope of sculptural hybridisation, of what happens when the Laocoön, Picasso, and a niftily branded, monumental packet of cigarettes get together and whelp - and, dammit, a lot of the work is sexy, too.

Warren spent some time in Greece studying classical sculpture and her impressive project is described as having been completed over the course of the past two years, despite the fact that all of the works in the show are dated 2000. Most of them are unfired, unpainted clay, thumb-printed and inchoate, and all have wise-cracking titles. Recalling Lucio Fontana's clay sculptures they feel obsessively exact, but like Carey Young's pocket-sized objects created by computer hackers, they've also got a rabid, contaminating, fast-breeding angle. The only bronze in the show, Bohemian Rhapsody III, raises the game into a slightly different league, taking on and subverting the 1970s' lounge conventions of wildlife sculpture, with some Rodin sprinkled in, sustaining the sense of a racked and flexed climaxing body.

Jesus, This is Iggy is a glazed, snot green and grey bunny monster cradling a lithe girl the milky colour of the sauce from a Marks and Spencer salmon en croûte; a Michelangelo Piéta with the Virgin swapped for a Koonsian bunny and the dead Christ replaced by Fay Wray. The Mechanic is a kneeling woman in kitten heels looping over a prostrated man, her hands on his eye sockets, and her hair falling forward while he attempts to wield his erection. The circularity is redoubled as the work revolves on a pistachio coloured plinth as remorselessly as any Ricky Swallow turntable.

Turned to face the wall and taking control of the visual low ground, Atom Heart Mother is a riff on abjection, a sort of pitiful, mounded, head on a low MDF plinth with a pair of anthropomorphising, imploring plastic eyes. Croccioni borrows from Boccioni's Unique Forms of Continuity in Space (1913), which itself is a fairly testosteroney work, but here Warren gives the legs Vivienne Westwood platform heels and bulbous calf implants, topped off with a wiry muff. These compressed and allusive plinth pieces are notably different from much of Warren's earlier divergent assemblage work, such as Every Aspect of Bitch Magic (1996), but not unprecedented. Helmut Crumb (1998), included in the Glenn Brown-curated 'It's a Curse, It's a Burden' show at The Approach in 1998, featured two pairs of differently sized legs straddling one another, a combination of Helmut Newton's cantilevered leg fetish and Robert Crumb's flaky engorgings. But whereas Helmut Crumb is all about the politics of high-water booty, Croccioni feels more like a considered shot at the great Italian speedster himself.

The airless but very funny eclecticism in these works (JPS combines a tumescent crucifixion with gold button stigmata and a black plinth) is a pretty good way of dodging the need to take a position about either ironic overload or the obvious gender issues being raised. But Journey into the Heart of the Night is an altogether more curdled business. In a wall-mounted Perspex case propped up with a length of carcassing timber, are a reliquary of bunny parts, a neon cock and cunt, and a clay absinthe bottle. The bunny skulls look a little like Matt Groenig's work transformed by a Polynesian rabbit cult. A postcard of a smitten philistine from the British Museum, and the inspiration for Moonage Daydream, has the protagonists' faces replaced with a raccoon and a pussycat. But Moonage Daydream itself looks like either a giant Transformer toy beating a quailing victim, or an artist demanding payment from a dealer. Apart from Journey, all the works are mounted on candy coloured plinths or muddy unfinished MDF boxes. Some are too small or too tall for the melée of couplings - Honky-Tonk Chateau for example - but together they create a candied Brancusi studio, a parodic hoop-la stand.