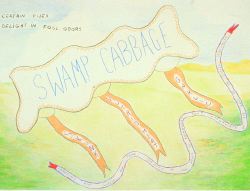 In the late 1960s Ree Morton abandoned a secure middle-class existence as a nurse, wife and mother of three to become an artist. A similarly unconventional impulse also informed her approach to art-making, which was both personal and opaque. A series of drawings from 1974 took the different habits and characteristics of plants and insects as its subject matter, individual works take their titles from the inscriptions laid over pastoral views drawn in crayon and pencil on the brightly coloured, ribbon-like banners - 'the broom rape family', 'snake grass', 'forget-me-not' and 'swamp cabbage'. They hover somewhere between sentimentality and a fairy tale world where things are never quite what they seem. Morton's plant imagery carries highly psychological overtones, and is almost medieval in its insistence on the human significance of these emblems from the natural world.

Most of the pieces on show here were part of larger installations that have now been dismantled or separated. Terminal Clusters (1974), a large, free-standing horseshoe embedded with light bulbs, was inscribed with the words of its title on a diagonal banner. The Plant That Heals May Also Poison, a pinkish wall-mounted sculpture, also from 1974, was similarly titled after its declaration. It was hung with prize ribbons, each of which bore the name of a poisonous plant such as cyclamen, nightshade and aconite. Like the drawings, they look homey and folksy, but also emanate the ominous atmosphere of death lurking at the heart of the garden. Taken together, the work approximates an obscure cartography and mythology, like the map of a complex, intimate geography reaching out to childhood fears and memories. But what they most strongly recalled was the cartoon style of Philip Guston's late paintings. Like Guston, Morton was interested in poetry and in language, not for its purely analytical and descriptive relationship to art, but for its ambiguous and evocative qualities.

While Morton was clearly aware of contemporary debates on gender issues - she considered that her own story resembled 'the feminist classic of out of the kitchen; into the studio' - her take on the idea that 'the personal is the political' now appears idiosyncratic. Her work is neither overtly political - there's no agit-prop, Martha Rosler-style critique of representation here - nor, unlike most Conceptual work of the period, is it preoccupied with its own process. This perhaps accounts for Morton's difficult posthumous reception. I wonder how, in the image and sign-centred art discourse of the 1980s, it could have found an audience. Of course, in the context in which they were made, you can see how she chose to dwell on the decorative and the sentimental, things traditionally associated with the feminine and considered too lowly for art; how she privileged a fragmentary sense of narration over large, independent objects; and how she insisted that the viewer compose his or her own reading of the meaning of the installation through connections between different, equivalent elements and personal histories. All of which are pretty much a given today, which is probably why her work now looks so contemporary.

The fact that Morton's artistic career was very short - she left graduate school in 1970 and died prematurely in 1977 - further complicates the way we understand it. How do you speak about somebody who died before they had the chance to fulfil their artistic promise? I don't know the right answer, but I'm pretty sure that the story of Morton's reception is a feminist classic. Very little of her work has been shown since her retrospective in 1980 at the New Museum in New York, and this exhibition in Zurich is only the second time her work has been shown in Europe. It leaves you wondering about the unrealized present contained in this past story.