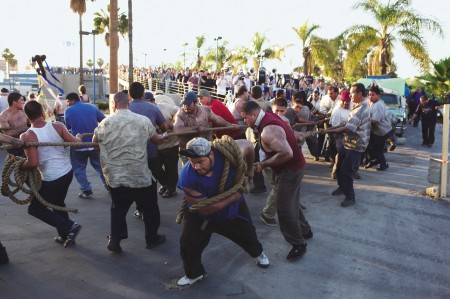 Performance art as we used to know it is dead. Instead, today’s most visible practitioners of the genre are engaged in activities better described as ‘production art’. Matthew Barney and composer Jonathan Bepler’s REN was a signal example. Although variously dismissed as ‘corny’ and ‘provincial’, REN reaffirmed Barney’s credentials as a staunch avant-gardist with a big budget and ambition to spare. On arrival at the venue – a car dealership in LA – we were confronted by solicitous car salesmen hustling with charm and gusto despite the debilitating heat. The hucksters were installed by Barney to reanimate what was a defunct motor-home sales lot as an operational Chrysler dealership (a nod to CREMASTER 3 (2002), which took place in the Chrysler building). Messy and meandering, the first overt moment of performance occurred when a marching band of sweaty youths approached the venue, hammering out an atonal dirge composed by Bepler.

What followed was a procession that lasted an hour, attended by the band, a conductor, the car salesmen and spectators. At the centre of it all was a lime-green Chrysler Imperial – a relic from CREMASTER 3 – fitted out with a filthy orb chained to a portable toilet and dragged by a team of husky men. Lying silently atop the car, shrouded in potatoes amongst other things was Aimee Mullins, another veteran Barney collaborator.

To describe comprehensively what followed would be to challenge the limits of ekphrasis – and perhaps that is the point. As Peggy Phelan argued, the ontology of performance is predicated on its unreproducibility and, in this case, its unreportability: you had to be there. That said, the procession ended at a car showroom that contained a gold Pontiac Firebird, which was replaced by the Imperial, billowing smoke from under its hood as a mariachi band played. The showroom was then sealed, and a monstrous industrial shredder introduced into the fray and the car, orb and porta-potty were mutilated, transforming the pristine showroom into a chaos of metal, plastic and chemically degraded faeces. Viewers were then ushered into the murky bowels of the dealership for the dénouement, which featured the British performance artist Mouse and the reappearance of Mullins, now lying atop the gold Firebird flanked by rows of decayed Chryslers.

The proceedings concluded as a veil of black plastic was unfurled from Mouse’s vagina and draped ceremoniously over Mullins and the Firebird. The dense iconography, opaque narratives and myriad materials raise the question of how one is supposed to experience such events. It’s easy to get mired in the desire to decode but even the most devoted of Barney’s iconographers would surely be baffled by the multifarious references on offer. Much of the literature on Barney hews to the desire to live inside his head – but the feral intensity of REN suggests the possibility of another kind of encounter: one predicated more on the multi-sensory play of social association than unwavering fidelity to the hermeneutics of authorial intention. Does it enhance the experience to know, for example, that this iteration of REN was the first of seven performances based loosely on Norman Mailer’s meditation on the afterlife Ancient Evenings (1983)? Or is our experience – and memory – better served by pressing our faces to the shell of a car showroom turned demolition site, as shards of a multi-million dollar sculpture ricochet mere inches from our noses, composing a new work before our very eyes?

BY Brian Butler, Sarah Lehrer-Graiwer AND Diana Thater | 22 FEB 21
MORE LIKE THIS