The Rest is Noise 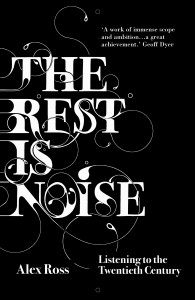 A third of the way into his crackling survey of 20th-century music The New Yorker critic Alex Ross mentions Franz Schreker’s opera Der ferne Klang (The Distant Sound, 1912). ‘The story of that opera is essentially the story of this book: the cultural predicament of the composer in the 20th century.’ A few pages earlier, with Ross wading through the choppy, acidic waters of Berlin in the 1920s, the author hints at another grand theme: ‘[Kurt] Weill and company seemed on the verge of solving the ultimate mystery – how to break the divide between classical music and modern society.’ And then there is the book’s subtitle to consider, ‘Listening to the Twentieth Century’, which claims a role for music that art and literature have long assumed: a prism through which to view history. This is not, in other words, a volume born of low ambitions.

Mostly it succeeds, and grandly so. Ross is determined to reclaim for music the jarring, often degenerate narrative he feels it deserves. Visual art has never airbrushed the vital and unsavoury elements from its history, he seems to say. Nor has literature, a dysfunctional family teeming with sex and political brawls, with drunken assignations and overtly polemical works. Why must music be treated so differently, so reverentially, so wrongly?

Thus Ross divides his book according to defined historical epochs: the Great Depression, prewar National Socialism, Stalin’s Russia etc. He steps confidently from one to the next, discussing the social and political influences on works from each period, dipping into his well-stocked critical armoury with skill and elegance. He provides historical context and suggests how works should be heard.

The only problem with this approach arises when Ross paints the composer as complete master of his own destiny, controlling the future and writing the history of his art form. The 20th century was nothing if not a reinvention of how music was performed and consumed. A few exceptions aside, composers were not in control of the music industry; the more ambitious the composer, the more he was a slave to the enormous, complicated, expensive cultural infrastructures through which his works were performed. Arnold Schoenberg and Igor Stravinsky’s failed attempts to conquer Hollywood on their own terms were only the mildest representations of this phenomenon.

Mostly Ross judges this well, though. And even when he doesn’t, he is still so good at putting music into words. He identifies ‘plain chords of necrophiliac bliss’ towards the end of Richard Strauss’ Salome (1905) as the heroine holds up the head of John the Baptist, preparing to kiss it. Or when the disfigured Jenufa gives her lover permission to walk away from her, in Leoš Janácek’s eponymous opera from 1904, he describes the melody as ‘a sustained note followed by a quickly shaking figure, which moves like a bird in flight, gliding, beating its wings, dipping down and soaring again’. And he has a good feel for the absurd, retelling the story of actress Fanny Brice walking up to Schoenberg at a Hollywood dinner and saying, ‘C’mon, Professor, play us a tune.’ Such poetic descriptions, such telling anecdotes, have long characterized Ross’ writing in The New Yorker. Neither gratuitous nor misleading, they are a welcome part of this wholesale repositioning of music in 20th-century history.