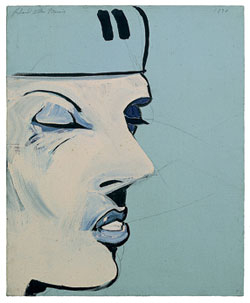 The artistic biography of Richard Allen Morris is swiftly told, and it is astonishing how little space it takes up. Born in 1933 in Long Beach, California, Morris spent most of his life in San Diego, where he worked doggedly in small studios – almost on the edge of the art world, and always on the breadline. With two or three exceptions the list of his solo shows barely crosses the southern city limits of Los Angeles in over 40 years; his first gallery show outside San Diego took place in 1996, at Chac Mool Gallery in West Hollywood. In spite of this, the cliché of a mould-breaking Outsider cannot be applied to him – his painting is too saturated with contemporary and historical references for that. A more appropriate image is that of the artist’s artist, someone whose work is discussed and appreciated primarily by his peers. For John Baldessari, Morris remains an influential role model, and the painter David Reed sees in his diverse oeuvre ‘a whole Escuela de San Diego, all by one artist’.
The Richard Allen Morris retrospective in Krefeld really did give the impression of an entire school of painters. Chronologically, his experiment began in 1961, when Morris painted the entire September issue of Art International magazine, page for page (Art International). Executed in black and white, with swift strokes, it covers around three-quarters of the canvas; on page 59 the grid is suddenly interrupted, the place where the magazine switches to colour – the true pulse of his painting. The ‘Guns’ series, made between 1965 and 1969, are like a luscious second helping of Claes Oldenburg, and even the portraits of Brenda and Nigel (both 1969) seem to be based more on soft sculptures than on real people. In smaller works, Jackson Pollock’s dripping technique, Franz Kline’s vigorous brushstrokes or the all-over style of early Philip Guston are reduced to tiny gestures, spread around a canvas, individually labelled and signed.
The pulse of Morris’ painting beats its way steadily like a sine wave through the 1960s and ’70s. He breaks through the pathos of Abstract Expressionism and reconciles it for a brief moment with Pop. Hurried blobs suddenly start a new life as comic figures; paint is squeezed straight out of the tube onto the canvas or smeared with a palette knife onto long slats of wood. Using Patch-n-Paint, a fast-drying, malleable paste, the artist modelled a bubblegum landscape of craters (Untitled, 1986) – maybe a preliminary finger exercise on the path towards the Gum Map he made in 1996 using sugar-free chewing-gum.
In view of the many witty moments in Morris’ oeuvre, one might be tempted to see at work the kind of Postmodern irony that served increasingly from the end of the 1960s to distance artists from traditional (mostly Modernist) models. But Morris’ stance is something different. It draws on his esteem for contemporary and historical role models, reproductions of which he collects and analyses in carefully kept ‘Homage Books’. Yet his paintings pick up where the approach of the respective role model threatens to become a convention: when paint is applied to the standard support of a white primed canvas, it is allowed to crumble away at the bottom edge (Painters Shade, 1982); and the wet-on-wet effect of Pacific Mix (2000) is topped with a little golden crown applied straight from the tube.
Morris’ experiments always end with things being taken one step further, in many cases deliberately too far. The ability to continue in this vein throughout his life in spite of harsh social conditions and in such restricted spaces is clearly due to the ‘obsessiveness’ that Baldessari so values. But this is an obsessiveness that is neither maudlin nor careworn, always painting away cheerfully, even effusively, against the vast majority of the art world. And it’s an obsessiveness that ultimately brought forth that idiosyncratic ‘whole Escuela de San Diego’.