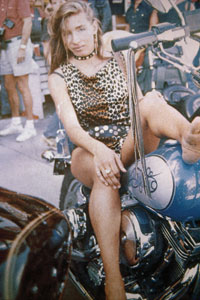 A major museum retrospective is its own kind of situation, its meanings and modes of presentation considerably more convention-bound. And this latest ‘Spiritual America’, curated by Nancy Spector, was a mostly straightforward affair – a thorough, well-organized survey, but an ultimately exhausting one. It functioned, as these things always do, to consolidate the artist’s reputation – an attempt to connect the dots between Prince’s position as a 1980s’-era innovator and his current status as art-market colossus. (All current writing about Prince is required by law to note the outrageous prices his work is going for. Consider it noted.) By necessity, such an exhibition favours compelling objects over dissonant situations.

Prince has, in fact, made many compelling objects over the past 30 years. One of the things the show underscored is his flawless eye for the mysteriously disorienting image. He knows what gives good meaning. Although ‘Appropriation art’ has entered art history textbooks, the cultural batteries of Prince’s early work still hold a charge. The titular Brooke Shields photograph – even though it was marooned off in a corner near the toilets – managed to exert its creepy, can’t-look/can’t-look-away pull. And Prince’s iconic Marlboro cowboy photographs are as gorgeously weird as ever, the familiar strangeness of their oversaturated saddle leather and mesas still resonant. Like them, the prefab car hoods have a sensual appeal that buzzes around the edges of their Conceptual wit. And while things never again matched the in-your-face level of that Brooke Shields shot, various versions of femininity have continued to play with fire: from the re-photographed biker-chick ‘Girlfriends’ to the recent ‘Nurse’ paintings – luridly over-painted pulp fiction covers – Prince’s women are designed to be troubling. (Is it any surprise his latest work revolves around redoing De Kooning and upping the vulgarity?)

As the show progressed in its more or less chronological spiral around the Guggenheim’s ramps, the museum’s topology seemed to mirror the topology of Prince’s artistic evolution: it felt like you were making your way deeper inside his head – which is where, for the most part, his work itself has gone. Over the years he has spent more and more time on his own obsessions: hot-rod culture, B-list celebrities, book collecting. It all forms a strangely impersonal autobiography, creates an opaque persona that reveals as much and as little as the cancelled cheques he has been plastering over recent canvases.

This persona may have been the point all along. In an interview in 1988 Prince – already treating his early work as historical – said: ‘What I did was not necessarily new, but the way the feelings were expressed was just different.’ While many critical takes still view Prince as, essentially, an ‘idea man’, the Guggenheim show makes a case for his work functioning most powerfully in the realm of affect. What is on display is a consistent, idiosyncratic sensibility. It’s not, as it turns out, an especially pleasant sensibility to spend an extended period of time with. It is cynical, wilfully sour – it has the whiff of stale smoke around it. It’s not for nothing that Prince has made his signature the obnoxious lounge-act joke. Appearing in various forms, obsessively repeated, these have served as a running commentary, the fictional, ventriloquized voice through which he speaks.

Perhaps the key joke for the retrospective is one that appeared in several different paintings: ‘Man walking out of a house of questionable repute, muttered to himself, “Man, that’s what I call a business ... you got it, you sell it, you still got it”.’ A museum is, after all, a house meant to settle questions of repute. And this particular museum exhibition was, among other things, a comment on Prince’s clearly impressive ‘business’. Like the one described in the joke, this industry depends on a seemingly magical economy: the slippery way that things that aren’t exactly objects – such as images and sex – get valued. Prince is a connoisseur of such economies. For better or worse, no matter how much he’s sold, he’s still got it.