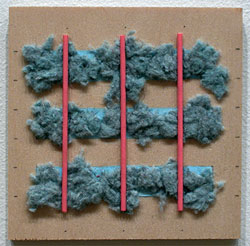 According to the Oxford English Dictionary, to be mindful is to be ‘fully aware of the moment, while self-conscious and attentive to this awareness’. The definition is a handy compass for navigating the work of Richard Tuttle, for whom mindfulness is the lodestar. Tuttle has had steady if not lavish attention throughout his 40-year career. The sheer delicacy of his pieces, composed from materials so modest as to be generally unnoticed, makes looking at his work unexpectedly demanding. Italo Calvino spoke of ‘the fine dust of atoms […] that goes to make up the ultimate substance of the multiplicity of things’, which could describe Tuttle’s work: what’s not seen matters as much as what is. David Hammons, Sarah Sze, Jessica Stockholder and a whole younger generation of emerging artists incorporate elements of Tuttle’s lightness and echo his willingness to press mundane objects into revealing their abstract possibilities.
‘It’s a Room for Three People’, the title of Tuttle’s exhibition, was divided into six groupings that the artist referred to as ‘villages’, each consisting of wall-mounted drawings or collages punctuated by sculpture. The ambiguous title refers to the triad of artist, collector and art historian – in this case Tuttle, the property developer Craig Robins (whose luxury Miami ‘village’ Aqua will include a large outdoor tile piece by Tuttle) and art historian Richard Schiff, with whom Tuttle once had an extended conversation on expanding orthodox ideas about drawing to a more catholic definition.
The exhibition, a result of that conversation, was itself a sequential process, with the first five villages installed in November and the sixth across the street in the Drawing Center’s project space in January. Made up of nearly 100 drawings and five sculptures, the villages – with their implication of a cohesive community or a unity of parts – were unfussy compositions both traditional (gouache, coloured pencil, charcoal, watercolour or graphite) and quirkily slapdash (string, glitter, foam rubber shavings or wood chippings). Each arranged situation was more inquiry than statement, and the modest materials appeared deceptively casual: drawing paper, ripped from a pad, still wore its tattered fringe. At his best, Tuttle deliberately chooses homely objects, using their very innocuousness to investigate colour, shape, line and relationships. The most realized pieces hum with the tension between such trifling materials and the spaces they occupy. But a number of the assemblages teetered on posies, too neatly and sweetly arrayed to make any impact, the effect less spectacular than prolific spectacle.
Sculpture demarcated the reach of individual villages, every three-dimensional piece composed of odds and ends – chicken wire, aluminium, Foamcore, plywood scraps. The most dynamic of these, Village I (2003), resembled an elephant’s trunk and seemed to burst from the wall, anchored to the floor by a metal base. The ribbing invisible under its apparently delicate, wired-together exterior gave it a discrete assertiveness in the space, the insistently jutting shape suggesting the impermanence of the wall itself. One wall in each gallery was covered with a repeated pattern of aqueduct-like shapes surrounded by waves of green, brown and blue. Suggestive of the sea, this design functioned like a billowing, surfy sound-track, adding some rhythmic motion to the static clusters of drawings.
Tuttle’s strongest work was in Village VI (2005), created in direct response to the show in the main space. The narrower, more confined rectangular project gallery was lined with small drawings on plywood, the surface covered in bubble wrap or fabric or cardboard constructions (one featured three coffins, in Mama, Papa and Baby sizes), each left-hand corner salvaged by plywood staves. These extended delicately a few inches beyond the corner, a tiny gesture suggestive of other hypothetical yet unseen drawings. The overall effect was resonant, the drawings and the oceanic patterns reverberating off each other. In this room Tuttle made even the air seem substantial, aquatic, with the pieces allowed to shimmer.
Immediately preceding the installation of Village VI Tuttle had organized a small show of Tantric drawings from India in the same space. Culled from the collection of French poet Franck André Jamme, the delicate gouache, tempera and watercolour works on paper rendered by anonymous artists were originally intended as a personal aid to meditation. Their palettes and amorphous abstract shapes and patterns represent energies major and minor. The humbly intense drawings were an inspired correlative to, and contrasted with, Tuttle’s own, which also centre on consciousness and focus. But in the Eastern tradition of Hindu Tantra, this focus comes from within, the paintings an aid to detachment and enlightenment. In Tuttle it’s the opposite: every piece marks an expression of decision, choice and control.