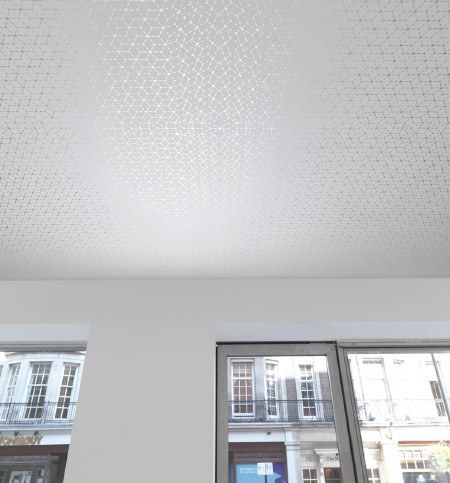 Richard Wright’s paintings bypass the more expansive stretches of gallery wall, instead occupying overlooked nooks and crannies. Framing skylights and sockets, air vents and alcoves, his interventions animate the elected space like architectural escutcheons. Gagosian’s Davies Street gallery, however, is spatially unremarkable: small and spare, its one distinctive feature is its glass-paned façade, through which the whole of the interior is visible. Here art is exposed to enquiring eyes like exotic fish in a tank, and Wright used this to full effect. Splayed across the ceiling, his new work was inconspicuous even when viewed straight-on. Rendered in silver-leaf, its reflective surface alternately gleamed and faded, conjuring a subtle, nearly ethereal, presence. From the street, the gallery appeared curiously vacant.

The Glasgow-based artist, shortlisted for this year’s Turner Prize, has adapted his practice to resist painting’s commodity status. ‘There are too many unnecessary objects,’ Wright has said. Accordingly, he forgoes canvas, painting directly on the wall, and insists that his work only exists for the duration of the exhibition, after which it is to be whitewashed over. The untitled Davies Street installation took this idea of a limited life-span a step further: delicate, even spectral, its silver-leaf design blurred into the white emulsion-coated surface. Evanescence seems polemical in this context, countering the materiality of the sellable, collectable, commercialized art object; in a subversive gesture, Wright appeared to be challenging Gagosian’s trade (by emptying the gallery of both moveable objects and of art visible to passersby) and the authority of the white cube (by marking its pristine surfaces).

Though the marginal placement and temporary nature of Wright’s work suggest insouciance, his paintings are, paradoxically, fastidious and extremely labour-intensive. Often compared to tattoos, their elegant lines could be mechanically produced or stenciled, such is their precision. Painted freehand while on a scaffold, the Davies Street ceiling work took about four weeks to complete. The design, indebted to both Op-art and Islamic tilework, was composed of intersecting dashes that suggested three-dimensional cubes or geometric poinsettias. Repeated over and over, these forms aggregated into a rhythmic pattern; the eye’s focus shifted, addled, as individual components morphed into a coherent whole. Belying its hand-made origins, the design was punctuated with irregularities, distortions that pulled and stretched sections so they appeared to melt and drip. Viewed from below – head tilted, neck craned – the interplay of intricate pattern and shifting luminosity induced a vertiginous feeling.

At 49, Wright just qualifies for the Turner Prize (which is awarded annually to a British artist under 50). He was nominated for work exhibited last year at Ingleby Gallery, Edinburgh, and as part of the 55th Carnegie International, Pittsburgh. The immense Pittsburgh wall painting was one of his most complex to date, comprising thousands of tiny red golf-tee shapes that radiated across the walls onto the ceiling and out through a window frame. In Edinburgh, he created work that was shown alongside Samuel Beckett’s experimental television play Quad II (1981), in which four anonymous gowned-and-hooded figures slowly shuffle in continuous choreographed loops. Wright’s response, an intervention of short, shimmering lines, evoked Quad II’s exploration of pattern and precision with its methodical composition. Set within the shelves of Ingleby’s Georgian bookcase, the installation mimicked the spatial parameters of Beckett’s play, in which all action is confined to a white quadrangle.

Both of the nominated projects benefited from curatorial contextualization and demonstrated the depth of Wright’s practice. Without this framing, however, it is easy to become transfixed by the most obvious strength of his painting, being so technically superlative and austerely beautiful. Hardly mere formal exercise, the Davies Street ceiling risked being perceived as such. But the installation, while decorative, wasn’t trivial. With a hint of subversiveness (even in the glitzy Gagosian Gallery), Wright creates work that is quietly innovative and subtly evocative.