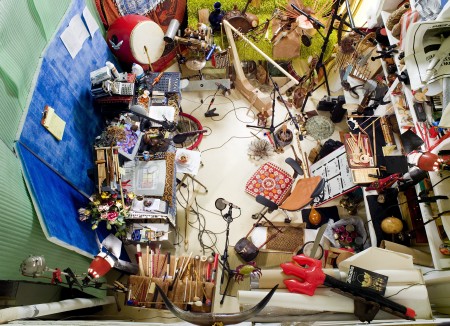 To radically simplify the diversity of forms and appearances Roberto Cuoghi’s art takes, we could identify a common denominator in the concept of metamorphosis. The idea of constant transformation and change, the hybridization of forms and identities, is a recurrent theme in the work of this Milan-based artist.

In some of his early projects, Cuoghi subjected his body to a variety of metamorphic processes, testing his physical capacities in a rather extreme fashion. While still a student at Milan’s Brera Art Academy, for instance, Cuoghi wore a pair of Schmidt-Pechan prisms – which rotate whatever is viewed through them by 180 degrees – mounted onto welders’ goggles for five consecutive days (Il Coccodeista, 1997). The glasses provided Cuoghi with a completely distorted vision of the world, obliging him to completely redefine his sense of sight and orientation. The project generated a video, a series of drawn self-portraits and a number of bitterly ironic, occasionally melancholic, short poems that related his experience of these exceptional circumstances, including the effects of the medicines he took to ease the pain provoked by the prisms. The resultant drawings and poems were accordingly executed in an elementary style and resembled the creations of a small child.

In 1998, at the age of 25, Cuoghi embarked on another radical first-hand experience. In an attempt to reverse the natural progression of time, he assumed the appearance of his father who, shortly after, became seriously ill. Cuoghi gained six and a half stone, dyed his hair white, grew a long beard, and dressed and acted like his father. Within a few weeks, the artist had transformed himself into an old man: the numbers had been inverted, time accelerated. Neither a performance nor a disguise, Cuoghi maintained his new persona for several years, in an ambiguous struggle between fiction and reality. Although it generated no further art works, news of Cuoghi’s attempt to ‘life-share’, to duplicate and consequently prolong another existence, spread by word of mouth until it passed into art-world lore. Cuoghi’s imitation survived the original, but his body paid a high inheritance tax: when his father passed away, the artist started to reverse the premature aging, but the stress to which he had subjected himself over the years rendered the process extremely slow and painful, even necessitating some surgical operations.

In an attempt to move away from employing his body directly in his art, Cuoghi represented himself as a cartoon in a number of works. In the video animation The Goodgriefies (2000), for example, he portrayed himself as an old man wearing dark glasses and as a fat Indian divinity, a hybrid creature among other monstrous bodies, created by combining characters from classic cartoons such as Loony Tunes and Peanuts with those from more recent series such as The Simpsons and South Park, producing a parade of grotesque-yet-comical figures. Cuoghi subsequently completed a number of darker and more disturbing paintings. Executed employing an exquisite, painstaking technique, in which multiple layers of glass and various materials are superimposed onto one another to create a range of disquieting images – from evil smiling creatures to unreadable geographical maps – the works evoke an Odilon Redon dream gone bad.

In Cuoghi’s world, hybridization exists at every level, between past and present, nature and technology, highbrow and popular culture. By revealing the level of adulteration and corruption hidden in any given form or story, his work questions identity, authority and authorship, origin and originality, in a world increasingly influenced by the forces of globalization and digitalization. Although it is tinged with a dark, almost decadent humour, Cuoghi’s art alludes to the fact that we are living in a time in which every residual concept of purity is redundant: the mythical era of Babel revisited.

It therefore comes as no surprise that Cuoghi’s latest project, ‘Šuillakku’ (2008), which recently opened at the Castello di Rivoli Contemporary Art Museum in Turin, focuses on Assyro-Babylonian history and mythology. After an extended period of research involving historians, archaeologists, ethno-musicologists, linguists and industrial designers, Cuoghi produced a sculpture and a sound installation. Located on the museum’s monumental staircase, the sculpture, which is over five meters tall, is an enlargement of a tiny bronze statue from the Louvre of the Assyrian deity Pazuzu, king of the demons of the wind. Following the principle that evil drives evil away, Pazuzu was frequently invoked as protector, and has a millenary history of reincarnations that in recent times has extended to The Exorcist (1971) and the video for ‘Rock It’ (2004) by Gorillaz. Inside the museum, rooms resonated with the myriad voices of Cuoghi’s overwhelming sound installation. The artist researched and reconstructed a number of ancient musical instruments, which he then used to accompany himself singing a lamentation from around 612 bc invoking the protection of the Assyrian gods.

The symbolic relevance of Cuoghi’s project becomes clearer when we consider that the lamentation dates from a time when one of the world’s first great empires was under threat from neighbouring populations. In Une brève histoire de l’avenir (A Brief History of the Future, 2006), Jacques Attali predicted that the global domination of the American empire will end about 20 years from now; Cuoghi speaks in a more metaphorical fashion about our fear of the unknown and about a world gone wrong. The road to Babylon is paved with anguish, despair and death.