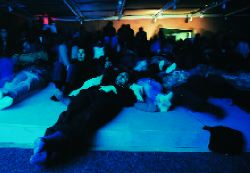 'Electronic music' - a non-genre so broadly defined as to be practically meaningless - is one of the great cultural stories of the last 50 years or so. No matter that, strictly defined, it would include most recorded music since the Beatles, if not earlier; as a catchall, the term encompasses artists from Stockhausen, to Moby, to Merzbow. While purists might chafe at such imprecision, the ascendancy of the term has managed to launch the mode of production into the popular imagination as a category as central as artist or pedigree. What gets lost in this popular elision of forms is the radical difference in reception: how is experiencing Stockhausen's Hymnen in a darkened theatre at all like hearing Moby's Play at the Virgin in-store listening booth? And how are either of these like a rave, that most iconic of techno institutions?

'Rooms for Listening' tackled this problem by exploding the concept of electronic music into electronic sound, and by exploring the diverse ways that sound is not only received but experienced. The most compelling piece in the exhibition, Leo Villareal's Sound Box (2000), is a foil-covered box about the size of a walk-in freezer, padded inside with acoustic foam, while a 'zero-gravity' bench allows visitors to recline in a position where body weight is distributed equally. It's like an isolation tank in which the participant floats in darkness and dead air. But settling into the void, a trickle of granular sound spills forth - it subsides when you sit still, and resumes as you reach out to explore the empty, but vibrant, sound-field. An infrared video camera records the user's movements, which are translated by a computer program into sequences of clicks, digital gurgles and sea-floor cracklings. Outside, the video is thrown onto the wall in a ghostly projection; viewers reclining in beanbags are treated to a strange kind of underwater hologram in which the participants gesticulate slowly as they learn to 'play' the space around them, their distorted figures blurring into bleached-out suggestions of collapsing movement.

Despite the seeing/being seen dichotomy, any overt reference to surveillance was downplayed. A frequent theme in sound art, however, surveillance surfaced in a more veiled manner in Toshiya Tsunoda's Monitor Units for Solid Vibration/Oliver Art Center (2000), in which 30 microphones, attached to individual sets of headphones, 'bugged' the walls of the gallery. As if taking the sonic pulse of the building, the ambient buzz, normally filtered out, became audible: air conditioning units, water pipes, and footsteps 'naturally' created the kind of rhythms painstakingly crafted by artists such as Bernhard Günter. Was this 'music' or simply found sound? With its minimal intervention, Monitor Units left the question as open as the space around the pops and clicks.

'Click', like 'glitch', increasingly describes a certain strain of Minimalist, digital post-Techno, thanks largely to Mille Plateaux's compilation Clicks_+_Cuts (2000). The album is central to Involving System's Mutable Muzzy Musics (2000), in which participants use different controllers to manipulate tracks - a nominally interactiveness, but Toshio Iwai's Composition on the Table, No. 1, Push (1998-99) provided a more spontaneous take on sonic play. A grid of plastic buttons is set into a round Formica table, an overhead LCD unit projects a selection of patterns over the keys, which correspond to a series of notes and visual effects. In one game (for there is no better way to think of the piece), the pressed keys trigger not only notes but brilliant blue lines radiating out like ripples in water. The other format sets up a complex system of gates and switches in which notes are sent bouncing through a madcap circuit.

The centrepiece of the show was Thom Faulders/Beige Design's site-specific Mute Room (2000). It cut through the trapezoidal gallery space with an enormous platform, covered in pink 'memory foam', which provided the lounging ground for many of the exhibition's performances. The foam - the same stuff used in earplugs - compacts under pressure and quickly expands, providing play for half-distracted listeners; at the same time, its acoustic effect is to dampen sounds and absorb reverberations, so that listeners were treated, not only to an acoustically sensitised space, but also to the thrill of bass reverberations running the length of their bodies. These performances tied the installation work back to the more familiar terrain of popular electronic music - albeit the most adventurous strains.

There were sets from laptop maven Kit Clayton, the iconoclastic Atom Heart, Blectum from Blechdom, Burnt Friedman, and Pole, among others. Webcast live, and archived by the Beta Lounge (www.betalounge.com), those performances, along with Antye Greie-Fuchs' sound-only version of her installation from 'Sonar 2000', are well worth returning to online; it's a pity that Web listeners will miss the bone-rattling effect of Pole's deep dub deconstructions, as they resonated up through the memory foam. It was here - in the room, in the ribcage - that the success of 'Rooms for Listening' was made apparent, in the visceral collision of sound, space and the body.