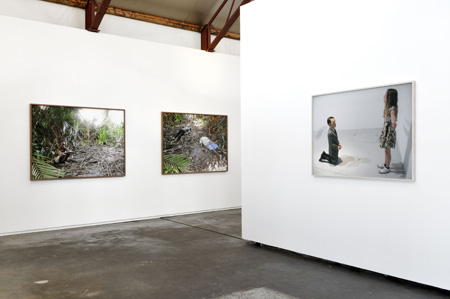 At the centre of Roy Villevoye’s exhibition, ‘The Histories’, two hyper-realistic life-size wax corpses lay on the gallery floor. Face down, eyes shut, with dirt and sand covering their clothes and bare feet, the two men – unquestionably dead – turned their backs to the viewer, as if permanently indifferent to the spectacle they aroused. Modelled after the artist and a Papuan friend, The Clearing (2011) is the third in a recent series of wax sculptures by Villevoye and the first in which the Dutch artist himself plays a prominent role. Although, as in many of Villevoye’s works, the circumstances behind the encounter remain ambiguous.

After achieving success early on in his career as an abstract painter, Villevoye radically changed his artistic practice in 1992 when he first travelled to the remote Asmat region of Papua, the former Dutch New Guinea and the largest province of Indonesia. Equipped with photo and video cameras, Villevoye made frequent trips to the area, seeking ‘real situations’ that enabled him to address his artistic concerns in a more direct (or, as he calls it, ‘authentic’) manner. That, of course, is slippery terrain, given the ethnographic legacy of the West and the colonial history between the Netherlands and Indonesia. One cannot be indifferent to this lingering past that, with or without artistic intent, keeps rising to – sometimes bursting through – the surface of Villevoye’s work.

His photographs, in particular, which document the hybrid culture of the Asmat people, indicate a desire to uncover the myth of ethnography, to encounter the ‘real’ Asmat, who until the mid-20th century were widely believed to be head-hunters and cannibals. Here, the intentions of the 19th-century ethnographer resonate: in The Fifth Man (2003), which wasn’t included in this show, Villevoye photographed himself with four stern-faced Asmat men – he and three others are wearing T-shirts with a portrait of Osama bin Laden. It’s difficult to tell whether Villevoye – the only white person in the picture – intends to portray himself as the ‘Other’, or whether ‘the Other’ might be the only man who is not wearing the same T-shirt.

Villevoye’s frank representations of his encounters with the Asmat people disarmingly broach cultural taboos. As much as Papuans have specific cultural reasons to object to the display of a life-sized replica of a Papuan, we – in the Netherlands and in the West – have our own fraught associations with such a display: wax figures in Western ethnographic museums today, for instance, are considered somewhat embarrassing relics of a certain form of historical self-reflection. The Video Message (2009), adds another layer of social discomfort: in this video, Villevoye’s Papuan friend Omomá, who posed for the artist’s first wax sculpture, Madonna (after Omomá and Céline) (2008), informs the artist about a dream in which he was visited by an ancestral spirit who warned him of the potential misfortune that awaits him for ‘allowing his soul to be copied and taken to Holland’. His collaboration with the Dutch artist has broken a taboo, which, according to Omamá, can only be undone by further financial compensation – a request that the artist complies with. Regardless, Omomá’s sculptural double will pose a lifelong threat: according to his beliefs, if he ever sees the work that was made after his image, it could result in sickness and, possibly, death.

One wonders whether these works break – let alone release – actual cultural taboos, or whether this is even the artist’s intention. Villevoye’s work attests to the fact that, on a personal level, two men can make a pact of risky yet meaningful exchange. On the other hand, the viewer, who remains an outsider in this agreement, is left feeling that neither financial refund nor personal sacrifice – neither the making nor possible unmaking of an artwork – can will away the discomfort of an irreversible and unspeakable history.