In the creeping tropical rain the organizers of San Paulo's Biennial 'Metropolitan Iconographies' began to appear as pale and pre-stressed as the looping concrete curves of the Oscar Niemeyer pavilion they occupied. But the show had been through a difficult birth, with a funding shortfall, two postponements and directorial tussles. German curator Alfons Hug dodged verbal bullets from the San Paulo art establishment about his selection of Brazilian artists, and even got a smearing from the local press when he opted to ditch the established early Modern historical core of the biennial.

This was little remarked on because, as conspiracy fans well know, the international art press is predisposed to ignore San Paulo; the thin showing of Euro art scribes would seem to confirm this. Hug operates outside the international curator's circuit, less like a tanned tennis millionaire on the ATP tour than a heavily vaccinated college kid toiling through the satellite venues. His reference points are literary ones such as Italo Calvino, Jorge Luis Borges and Joseph Conrad. He has also spent long spells at Goethe Institutes in Africa and Latin America, gravitating towards oblique, unmappable, unnavigable cities, and has a special affection for the no man's lands of the South American mega-cities Caracas and San Paulo.

In this context some of the strongest works resulted from visits made by the artists to Brazil earlier in the year, when Hug's enthusiasm for the poisonous exhalations of the traffic and the smeary-windowed automotive view took hold. Huang Yong Ping and Shen Yuan's Flying Bowl (2002) conceived a model favela constructed in a huge white clay basin, a replica of Niemeyer's concrete bowl at the Congresso Nacional in Brasilia. The wooden scaffolding and the shacks inside can be observed only from a nearby balcony, drawing out the concealment of Niemeyer's Brasilia, a superstructure freighted with the 100 million or more invisible poor of the country.

Pascale Tayou built a tinkling lantern-draped village from the slightly creepy ready-made wooden dog kennels bought from roadside vendors who camp under eight lanes of a howling motorway. For the immigrants from north-east Brazil who fabricate kennels and children's play houses from discarded fruit boxes, the waiting line of Brazilian TV crews raised hopes that in time more drivers would screech to a halt and pick up a kennel of their own. In the entrance hall next to Haluk Akakçe's radiant wall paintings Sarah Sze constructed an untitled towering, ductile, whirring three-storey bamboo and polystyrene ecosystem that climbed weightlessly into the aspirational parabolas of Niemeyer's building.

With 190 artists (including 34 from Brazil) and 70 represented countries, San Paulo trails only Venice and Documenta in scale. So while eleven cities were each represented by their own national curators (recalling the Tate Modern's 'Century City'), Hug's 12th city was a utopian one. And if the levelling and random aspect of the biennial inevitably subdued the national sections, particularly that of South Africa, Hug's 12th city was exalted and punchy. In the first non-US biennial to digest some of the issues of 11 September his city rediscovered surveillance and visibility as the big theme.

Fabrice Gygi's Vigie ( 2002), an aggressive 12 metre high control tower, is a pumped-up version of the watchtower that guards most apartment blocks in the city. It presided over a Vanessa Beecroft performance, VB50 (2002), which employed Brazilian models who had had their colour altered with body make-up. Beecroft set up an Amazonian palette of bodies in Brazil, where the term boa aparência is current job-ad shorthand for skin colour exclusion.

Architects featured large. Atelier van Lieshout built Sportopia (2002), a scaffolding tube gym and shag palace for mutual co-existence, a sort of Houellebecquian daydream, complete with composting toilet and whisky dispensers. Needless to say, Sportopia's first-floor bed platform was overlooked by three more towers, Torres de Vigia (2002), in polished aluminium and green Perspex by the Cuban collective Los Carpinteros. Marking a shift in scale from their earlier joinery projects, the towers are where the techniques of Guantánamo Bay and Camp X-Ray come home to roost. Brazilian architects Isay Weinfeld and Marcio Cogan added Happy Land (2002), a model city with pre-toppled and scorched office towers, luxury favelas, a refugee camp and a convenient shopping centre drop-off zone for kidnappers. In San Paulo, where they have developed the sequestro relâmpago - a one-day mini-kidnapping - this could save hours.

Roberto Cabot's web project mediamorphose.com (2002) automatically captures and publishes pictures of visitors when they stray in front of an anamorphic painting of a rioter during one of the recent Brazilian car plant disturbances. Next door Mauricio Dias and Walter Riedwig created a delirious private chamber of antique camphor-scented cabinets stacked with pull-out drawers, Belo Tambien Era Aquilo que Não Foi Visto (That which you didn't see was also beautiful, 2002), each of them a chocolate-smooth model of a section of Brazilian land, used to teach pupils at a Rio de Janeiro home for the blind.

The Brazilian artists, curated by Agnaldo Farias, had their work installed in the pavilion with ten online projects. This was a young geographically diverse grouping that ranged from the visceral and devout work of Karin Lambrecht through to Daniel Acosta's laminated formica cabins and pools, intense architectural parodies of events such as San Paulo's unwieldy Arte Cidade.

Local galleries pointedly staged a number of events to coincide with the biennial, including 'Ill paralela', an inexplicably cramped show that featured work by Adriana Varejão, Rivane Neuenschwander, Rolla Marepe and Mauro Piva. The action took place in the Ibirapuera Park pavilion, where Marcel Odenbach's selection of African videos turned up Zwelethu Mthethwa's transcendent work Crossings (2001), a three-channel video of river baptisms performed in South Africa by the apostolic Free Relita church of Zion. A nervous priest fingers the water, dissimulating his jitters, while acolytes are led through the stream to be submerged.

But it was Jun Nguyen-Hatsushiba who blew off the doors with his memorial piece for Vietnamese boat people Memorial Project, Nha Trang, Vietnam: Towards the Complex - For the Courageous, the Curious and the Cowards (2001). Filmed at a diving resort in Vietnam, the film tracks three teams of boys trying to pedal bicycle taxis along the seabed. Every minute or so they explode to the surface for air then swim down again, repeating the process many times in the clear water, continuously and still, incredibly, in motion. 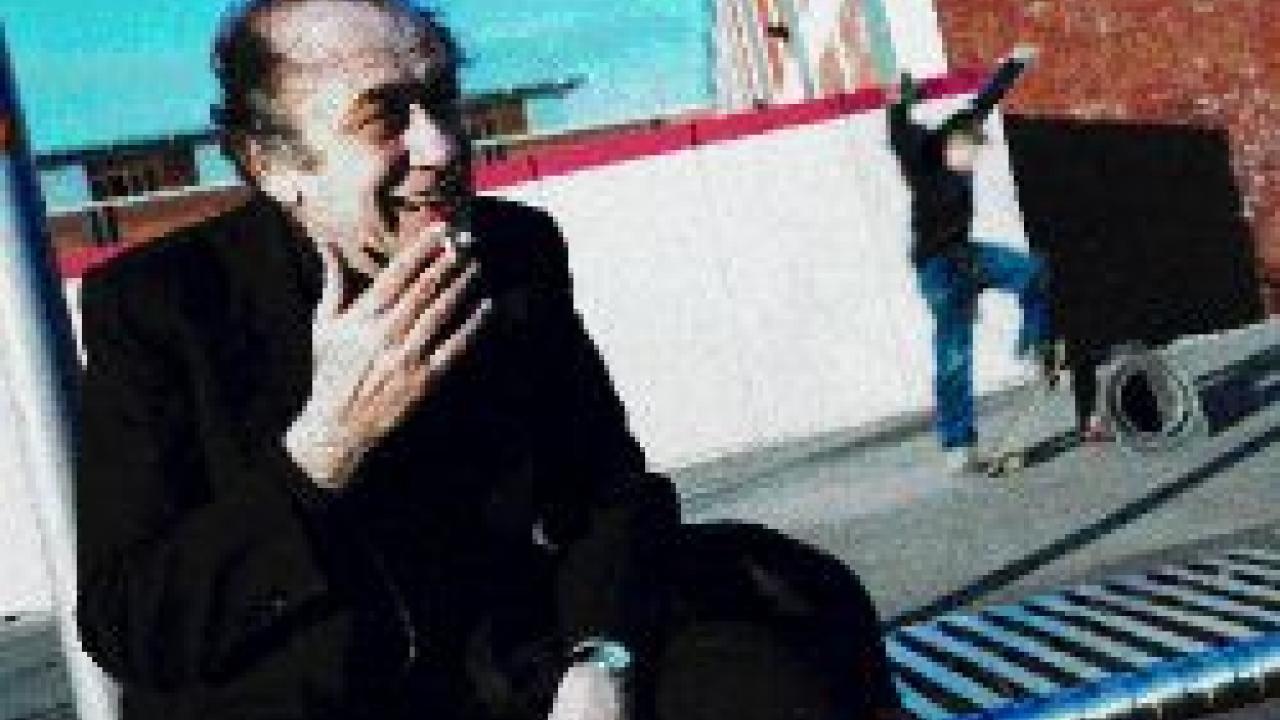 An interview with Vito Acconci